Assessing the Occurrence of Waterborne Viruses in Reuse Systems: Analytical Limits and Needs

The ambient air from wastewater treatment plants has been considered as a potential source of pathogenic microorganisms to cause an occupational risk for the workers of the plants. Existing detection methods for enteric viruses from the air using a liquid as the collection medium therefore require special care to handle on-site. Knowledge accumulation on airborne virus risks from wastewater has been hindered by a lack of portable and handy collection methods. Enteric viruses are prevalent at high concentrations in wastewater; thus, the surrounding air may also be a potential source of viral transmission. We developed a portable collection and detection method for enteric viruses from ambient air and applied it to an actual wastewater treatment plant in Japan. Materials of the collection medium and eluting methods were optimized for real-time polymerase chain reaction-based virus quantification. The method uses a 4 L/min active air sampler, which is capable of testing 0.7–1.6 m3 air after 3–7 h sampling with a detection limit of 102 copies/m3 air in the field. Among 16 samples collected at five to seven locations in three sampling trials (November 2007–January 2008), 56% (9/16) samples were positive for norovirus (NV) GII, with the highest concentration of 3.2 × 103 copies/m3 air observed at the sampling point near a grit chamber. Adenoviruses (4/16), NV GI (6/16), FRNA bacteriophages GIII (3/16), and enteroviruses (3/16) were also detected but at lower concentrations. The virus concentration in the air was associated with that of the wastewater at each process. The results imply that the air from the sewer pipes or treatment process is contaminated by enteric viruses and thus special attention is needed to avoid accidental ingestion of viruses via air. View Full-Text
Keywords: virus; aerosols; pathogenic microorganisms; real-time PCR virus; aerosols; pathogenic microorganisms; real-time PCR
►▼ Show Figures 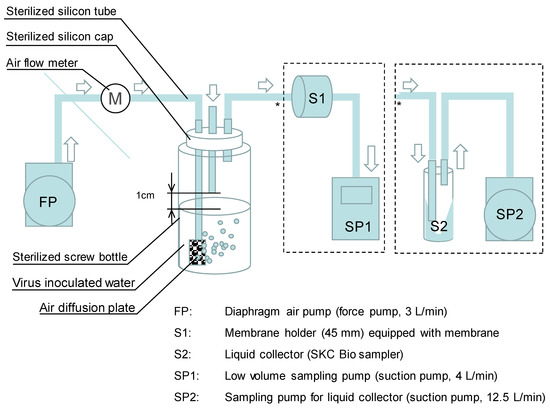 Matsubara, K.; Katayama, H. Development of a Portable Detection Method for Enteric Viruses from Ambient Air and Its Application to a Wastewater Treatment Plant. Pathogens 2019, 8, 131. https://doi.org/10.3390/pathogens8030131


Matsubara K, Katayama H. Development of a Portable Detection Method for Enteric Viruses from Ambient Air and Its Application to a Wastewater Treatment Plant. Pathogens. 2019; 8(3):131. https://doi.org/10.3390/pathogens8030131


Matsubara, Koichi, and Hiroyuki Katayama. 2019. "Development of a Portable Detection Method for Enteric Viruses from Ambient Air and Its Application to a Wastewater Treatment Plant" Pathogens 8, no. 3: 131. https://doi.org/10.3390/pathogens8030131