Acknowledgement to Reviewers of Pathogens in 2018
Previous Article in Journal

Serological Survey of Ehrlichia canis and Anaplasma phagocytophilum in Dogs from Central Italy: An Update (2013–2017)

The bacterial biota in larvae of Capnodis tenebrionis, a serious pest of cultivated stone-fruit trees in the West Palearctic, was revealed for the first time using the MiSeq platform. The core bacterial community remained the same in neonates whether upon hatching or grown on peach plants or an artificial diet, suggesting that C. tenebrionis larvae acquire much of their bacterial biome from the parent adult. Reads affiliated with class levels Gammaproteobacteria and Alphaproteobacteria (phylum Proteobacteria ca. 86%), and Actinobacteria (ca. 14%) were highly abundant. Most diverse reads belong to the families Xanthomonadaceae (50%), Methylobacteriaceae (20%), Hyphomicrobiaceae (9%), Micrococcaceae (7%) and Geodermatophilaceae (4.5%). About two-thirds of the reads are affiliated with the genera Lysobacter, Microvirga, Methylobacterium, and Arthrobacter, which encompass species displaying cellulolytic and lipolytic activities. This study provides a foundation for future studies to elucidate the roles of bacterial biota in C. tenebrionis.
Keywords: bacterial biota; Buprestidae; Capnodis; stonefruit bacterial biota; Buprestidae; Capnodis; stonefruit

Insect pests may pose significant challenges to environmental quality and human welfare [1], but contribution of their symbiotic microorganisms for establishment and cause additional environmental and economic injury is still vague [2]. Multispecies microbial communities harbored in insect guts are involved in nutrition, digestion, and defense activities. Little is known about the diversity, physiology, and ecology of microorganisms associated with bark and wood-boring beetles [3,4]. Insect-symbiotic bacteria supplement essential nutrients, degrade complex dietary polymers and plant toxins [5,6,7], and thus contribute to overcoming plant defenses and higher host fitness [8,9]. Flatheaded borers Capnodis spp. (Coleoptera: Buprestidae) inflict serious harm to fruit and ornamental trees around the Mediterranean, in Southern Europe and in Western Asia [10]. Control regimes of Capnodis spp. populations rely on intensive applications of synthetic insecticides, whereas environmentally friendly means are partially absent. Capnodis tenebrionis is the most notorious pest among the congeners. Revealing the bacterial biota in larvae may be an avenue to the development of new, safe tools to cope with this pest. Information about microorganisms harbored by C. tenebrionis larvae does not exist; studying their core microbiota can improve the ability to develop more effective management approaches for this pest [11].

Adults of C. tenebrionis were collected in nectarine orchard next to Yesod HaMa’ala (Hulla Valley, 33°05′26″ N, 35°58′90″ E, and newly-hatched larvae of the first lab generation were examined. Larvae were randomly sampled from hatching neonates, and from individuals lab-reared on peach plants and on an artificial diet over four weeks [43]. The larvae were surface-sterilized with 75% ethanol for 90 s, rinsed twice with sterilized-deionized water, and stored at −80 °C.
Total bacterial DNA was extracted from the larvae using the PowerSoil® DNA Isolation Kit (MO BIO laboratories, San Diego, CA, USA) following the manufacturer’s protocol, except that each sample was placed into liquid nitrogen and crushed with a pestle before cell lysis. Total genomic DNA extraction of 6 samples, each composed of 3 C. tenebrionis larvae, was performed by the DNA Services Facility at the Research Resources Center, at the University of Illinois at Chicago, for 16S rRNA gene sequencing using the Illumina MiSeq platform. Conserved regions V1–V3 of the 16S rDNA were amplified using PCR with the pair of primers CS1_27F/CS2_534R. A total of 1,056,756 reads were obtained.
Raw reads were merged using the software package PEAR (v0.9.10) [44]. Low quality sequences and chimeras were removed by the software package Mothur (v1.36.1) [45]. The quality-controlled sequences were processed with the Quantitative Insights into Microbial Ecology (QIIME v1.9.1) package [46]. Briefly, sequence data were clustered into operational taxonomic units (OTU) at 97% similarity using UCLUST. Representative sequences from each OTU were extracted and aligned using PyNAST with a percent identity threshold of 60% to the Silva 16S rRNA bacterial database [47]. Representative sequences were classified for taxonomy assignment by UCLUST and Silva database. Unassigned OTUs at the genus level were analyzed using standard nucleotide BLAST analysis (https://blast.ncbi.nlm.nih.gov/Blast.cgi). A Biological Observation Matrix (BIOM) was generated at different taxonomic levels. OTU with a total observation count lower than 50 reads were discarded. Qiime was also used to generate an alpha rarefaction plot as well as principal coordinate analysis (PCoA) plots based on weighted and unweighted UniFrac metrics (beta diversity). 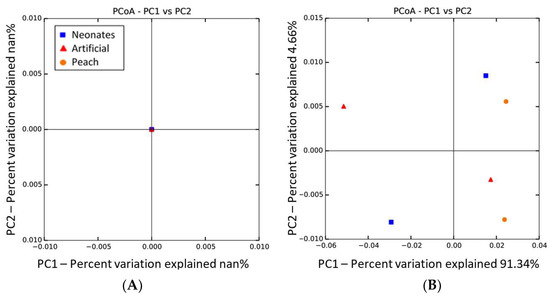 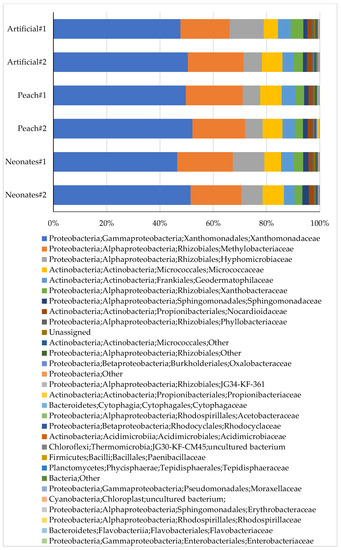