Antimicrobial Activity of Six Essential Oils Against a Group of Human Pathogens: A Comparative Study

Clostridium perfringens causes a wide range of diseases in a variety of hosts, due to the production of a diverse set of toxins and extracellular enzymes. The C. perfringens toxins play an important role in pathogenesis, such that the presence and absence of the toxins is used as a typing scheme for the species. In recent years, several new toxins have been discovered that have been shown to be essential or highly correlated to diseases; these include binary enterotoxin (BecAB), NetB and NetF. In the current study, genome sequence analysis of C. perfringens isolates from diverse sources revealed several putative novel toxin homologs, some of which appeared to be associated with potential mobile genetic elements, including transposons and plasmids. Four novel toxin homologs encoding proteins related to the pore-forming Leukocidin/Hemolysin family were found in type A and G isolates. Two novel toxin homologs encoding proteins related to the epsilon aerolysin-like toxin family were identified in Type A and F isolates from humans, contaminated food and turkeys. A novel set of proteins related to clostridial binary toxins was also identified. While phenotypic characterisation is required before any of these homologs can be established as functional toxins, the in silico identification of these novel homologs on mobile genetic elements suggests the potential toxin reservoir of C. perfringens may be much larger than previously thought. View Full-Text
Keywords: toxin; plasmid; pCW3; pCP13; Clostridium perfringens; leukotoxin; epsilon; binary toxin; hemolysin toxin; plasmid; pCW3; pCP13; Clostridium perfringens; leukotoxin; epsilon; binary toxin; hemolysin
►▼ Show Figures 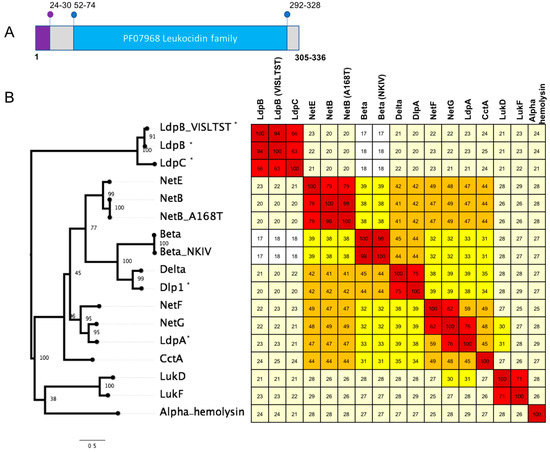