Modelling a Silent Epidemic: A Review of the In Vitro Models of Latent Tuberculosis
Previous Article in Journal

Enterohemorrhagic Escherichia coli (EHEC) utilizes a type III secretion system (T3SS) to inject effector proteins into host cells. The EHEC NleH1 effector inhibits the nuclear factor kappa-light-chain-enhancer of activated B cells (NF-κB) pathway by reducing the nuclear translocation of the ribosomal protein S3 (RPS3). NleH1 prevents RPS3 phosphorylation by the IκB kinase-β (IKKβ). IKKβ is a central kinase in the NF-κB pathway, yet NleH1 only restricts the phosphorylation of a subset of the IKKβ substrates. We hypothesized that a protein cofactor might dictate this inhibitory specificity. We determined that heat shock protein 90 (Hsp90) interacts with both IKKβ and NleH1 and that inhibiting Hsp90 activity reduces RPS3 nuclear translocation.
Keywords: E. coli; Hsp90; NleH1; RPS3 E. coli; Hsp90; NleH1; RPS3

The nuclear factor kappa-light-chain-enhancer of activated B cells (NF-κB) family of transcription factors regulates innate and adaptive immune responses. In addition to the well-characterized Rel family proteins [1], ribosomal protein S3 (RPS3) is a key non-Rel subunit and was identified as a “specifier” NF-κB component. RPS3 guides NF-κB to specific κB sites by increasing the affinity of the NF-κB p65 subunit for target gene promoters [2]. Activation of NF-κB signaling is initiated by external stimuli that activate the IκB kinase (IKK) complex. This complex consists of two catalytic components, IKKα (IKK1) and IKKβ (IKK2), in addition to a regulatory subunit, the NF-κB Essential Modulator (NEMO; IKKγ). The canonical IKK complex plays a central role in regulating many cellular processes in response to a variety of physiological and pathological stimuli, among which NF-κB is the best known. Activated IKKβ phosphorylates IκBα, resulting in its subsequent ubiquitination and degradation, which allows for p65 and p50 nuclear translocation [3]. IKKβ also phosphorylates RPS3 on Ser209, enhancing its association with importin-α and mediating RPS3 nuclear translocation [4].
Bacteria have evolved secretion systems to transport virulence proteins, termed ‘effectors’, to counteract host innate immunity. Enterohemorrhagic Escherichia coli (EHEC) encodes numerous type three secretion system (T3SS) effectors that subvert cellular processes to create an environment conductive to bacterial survival. EHEC encodes two forms of the NleH effector, NleH1 and NleH2 [5,6]. Both effectors bind RPS3, but only NleH1 inhibits RPS3 nuclear translocation by preventing RPS3 phosphorylation on S209 by IKKβ [4,5]. NleH1 activity only restricts the phosphorylation of a subset of the IKKβ substrates, suggesting that an additional host co-factor might dictate this inhibitory specificity. Here we identified heat shock protein 90 (Hsp90) as an NleH1 binding partner and found that inhibiting Hsp90 activity reduced RPS3 nuclear translocation.

To determine whether EHEC NleH1 binds directly to IKKβ we conducted GST pulldown assays. His-IKKβ, GST, GST-NleH1 and GST-NleH2 were purified using nickel-nitrilotriacetic acid (Ni-NTA) agarose beads. Purified GST (negative control), GST-NleH1 and GST-NleH2 were immobilized on GST beads and incubated with His-IKKβ. IKKβ was enriched in the NleH1 and NleH2 pulldown samples, as compared to the negative control (Figure 1A). To determine whether NleH1 and NleH2 interact with IKKβ in mammalian cells, we performed co-immunoprecipitation experiments. After co-transfecting either NleB1-HA (as a negative control), NleH1-HA or NleH2-HA with FLAG-IKKβ, cell lysates were immunoprecipitated with anti-FLAG M2 beads and subsequently immunoblotted. NleH1-HA and NleH2-HA, but not NleB1-HA, interacted with FLAG-IKKβ (Figure 1B). Thus, NleH1 and NleH2 bind directly to IKKβ in vitro, and interact with IKKβ in mammalian cells.
To identify other proteins that are enriched with IKKβ as a function of co-expression of NleH1, we repeated the transfection experiments described above and then processed the immunoprecipitated proteins samples for mass spectrometry analysis. We identified Hsp90, Cdc37 and RPS3 in these samples.
Hsp90 is an important chaperone protein that regulates the folding, stability and trafficking of many client proteins [7]. Cell division cycle protein 37 (Cdc37) is one of the best-studied Hsp90 co-chaperones [8,9]. Hsp90 interacts with Cdc37 and the Hsp90-Cdc37 complex can form a stable complex with IKK, which plays a critical role in its activation and regulation [10,11]. Due to the important association between Hsp90 and IKK, we focused on the potential interactions between Hsp90, IKKβ, and NleH1.

To assess the association of Hsp90 and IKKβ in mammalian cells, we performed co-transfection and co-immunoprecipitation experiments with Hsp90-HA and FLAG-IKKβ. HEK293 cell lysates were immunoprecipitated with anti-FLAG M2 beads and subsequently immunoblotted with anti-FLAG and anti-HA antibodies. Hsp90-HA interacted with FLAG-IKKβ (Figure 2A), which is consistent with a previous study showing that endogenous Hsp90 co-precipitated from HeLa cell extracts with IKKβ [10]. We considered whether IKKβ might interact with both NleH1/NleH2 and Hsp90. To test this idea, we co-transfected HEK293 cells with FLAG-IKKβ Hsp90-HA and NleH-HA. We observed that IKKβ interacted with Hsp90, NleH1 and NleH2 (Figure 2B) and that Hsp90 interacted with both NleH1 and NleH2 (Figure 2C).

Hsp90 is a highly conserved and abundant heat shock protein (HSP) involved in a myriad of cellular processes. The abundance of Hsp90 accounts for ~1–3% of the total cytosolic proteins [12]. It is required to facilitate protein folding, stabilize client proteins and protect proteins from ubiquitin-dependent proteasomal degradation [13]. Geldanamycin binds to the ATP-binding site of Hsp90 to abolish the interaction between Hsp90 and its client proteins [14]. GA abolishes TNF-induced IKKβ activation and IκBα degradation, thus blocking NF-κB activation [15]. GA treatment also causes proteasomal degradation of IKKβ [16], leading to altered migration of the IKK complex [11].
NleH1 and NleH2 share 84% amino acid sequence identity, but have differential abilities to regulate the NF-κB pathway [17]. NleH1, but not NleH2, inhibits the phosphorylation of RPS3 by IKKβ without affecting the kinetics of IκBα δεγραδατιον (degradation) [17]. However, when IKKβ is overexpressed, both NleH1 and NleH2 were shown to attenuate NF-κB activation [18]. Though our results indicated that both NleH1 and NleH2 interact with Hsp90, because only NleH1 inhibits RPS3 nuclear translocation, we thus only focused on NleH1 for these functional studies.
IKKβ is crucial for regulating NF-κB signaling and plays an important role in tumorigenesis, as evidenced by the fact that deletion of IKKβ in a colitis-associated cancer model leads to decreased tumor incidence [19] and that T-cell restricted constitutively active IKKβ improves tumor control [20]. Hsp90 activity is required for IKKβ biosynthesis and activation [16] and the formation of a Cdc37-Hsp90 complex is important for stabilizing the IKK complex [10].
Here we present evidence that Hsp90 also interacts with the EHEC T3SS effector NleH1. NleH1 only restricts a subset of the IKKβ substrates, most importantly RPS3 [4]. Hsp90 binds directly to RPS3 and this Hsp90-RPS3 interaction was previously shown to protect RPS3 from proteasome-dependent degradation [21]. Our studies now identify an additional role for Hsp90 in regulating RPS3 nuclear translocation. We determined that GA inhibited both TNF-mediated p65 nuclear translocation and RPS3 nuclear translocation, indicating that Hsp90 is an important cofactor in regulating host inflammatory responses to bacterial virulence proteins. We also identified a direct interaction between NleH1 and IKKβ and identified Hsp90 as a cofactor in this complex. Importantly, inhibiting Hsp90 had a significant impact on wild-type EHEC adherence to Caco-2 cells, but did not impact the adherence of EHEC ΔnleH1. Thus, there may be a functional link between Hsp90 and NleH1 that impacts EHEC virulence and warrants further investigation.

This work was supported by grant AI099002 from the National Institute of Allergy and Infectious Diseases.

This work was supported by grant AI099002 from the National Institute of Allergy and Infectious Diseases. Its contents are solely the responsibility of the authors and do not necessarily represent the official views of the NIAID. The funding sponsors had no role in the design of the study, in the collection, analyses or interpretation of data, in the writing of the manuscript, or in the decision to publish the results. 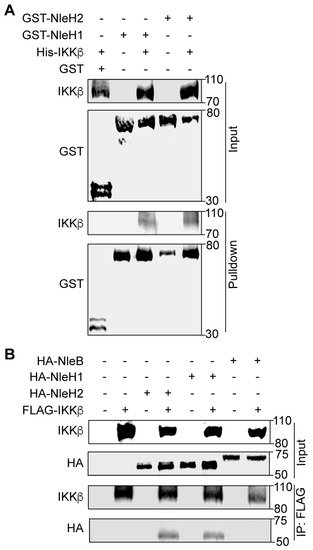 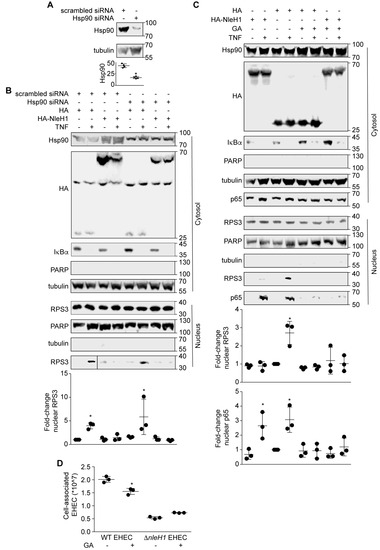 Table 1. Strains and Plasmids.
Table 1. Strains and Plasmids.
© 2018 by the authors. Licensee MDPI, Basel, Switzerland. This article is an open access article distributed under the terms and conditions of the Creative Commons Attribution (CC BY) license (http://creativecommons.org/licenses/by/4.0/).
We use cookies on our website to ensure you get the best experience. Read more about our cookies here.
Accept
We have just recently launched a new version of our website. Help us to further improve by taking part in this short 5 minute survey here. here.
Never show this again