Gram-negative bacteria export virulence proteins (effectors) into host cells using a type three secretion system (T3SS) [1]. Effectors bind and/or post-translationally modify host proteins, preventing the host from generating inflammatory responses to the pathogen. Enterohemorrhagic E. coli (EHEC) is an attaching/effacing (A/E) pathogen that causes hemorrhagic colitis and pediatric renal failure in humans [2]. The EHEC T3SS and some effectors are encoded on a pathogenicity island termed the locus of enterocyte effacement (LEE) [3]. Most of the effectors encoded within the LEE are referred to as E. coli secreted proteins (Esps), while effectors encoded outside the LEE are referred to as non-LEE encoded effectors (Nles). Salmonella enterica serovars encode multiple T3SSs; T3SS-1 is encoded on the Salmonella pathogenicity island (SPI-1) and delivers effectors across the host cell plasma membrane to trigger actin rearrangements that contribute to bacterial invasion [4]. T3SS-2 is encoded on SPI-2 and translocates virulence proteins from the Salmonella containing vacuole (SCV) into the host cell cytoplasm [5].
The recognition of bacterial pathogens by host cells triggers multiple signaling pathways to induce host inflammatory responses [6], many of which are regulated by the nuclear factor kappa-light-chain-enhancer of activated B cells (NF-κB). The ribosomal protein S3 (RPS3) is a component of the eukaryotic 40S small ribosomal subunit and plays multifunctional roles in DNA repair and apoptosis [7,8]. RPS3 possesses an endonuclease activity that mediates some DNA repair processes [9]. Knockdown of RPS3 protects cells from genotoxic stress after hydrogen peroxide treatment [10]. RPS3 can be phosphorylated by PKCδ, leading to its mobilization in the nucleus to repair damaged DNA [11]. RPS3 is one of a large number of ribosomal proteins that have extraribosomal functions [12]. Many of these functions are related to tumorigenesis [13], immune signaling [14], and cell development [15].
RPS3 functions as a “specifier” component in NF-κB complexes [16]. RPS3 guides NF-κB to specific κB sites by increasing the affinity of the NF-κB p65 subunit for target gene promoters [16]. RPS3 associates with p65 in the inhibitory p65-p50-IκBα complex in the cytoplasm of resting cells [16]. Activation of NF-κB is initiated by external stimuli that activate the IκB kinase (IKK) complex. Activated IKKβ phosphorylates IκBα, leading to its subsequent ubiquitination and degradation, which allows for p65 and p50 nuclear translocation [17]. IKKβ also phosphorylates RPS3 on Ser209, enhancing its association with importin-α and mediating RPS3 nuclear translocation [18].
Two EHEC effectors disrupt the activation of the innate immune system of intestinal epithelial cells by inhibiting RPS3 nuclear translocation. NleH1 binds to RPS3 [19] and inhibits its phosphorylation by IKK-β [18]. NleC proteolysis of p65 generates an N-terminal p65 fragment that competes for full-length p65 binding to RPS3, thus inhibiting RPS3 nuclear translocation [20]. Thus, E. coli has multiple mechanisms by which to block RPS3-mediated transcriptional activation. With this in mind, we considered whether other enteric pathogens also encode T3SS effectors that affect this important host regulatory pathway. Here we report that the Salmonella Secreted Effector L (SseL), which has been previously shown to inhibit NF-κB signaling [21] and function as a deubiquitinase [22], also inhibits RPS3 nuclear translocation.

RPS3 translocates to the nucleus after stimulation with human tumor necrosis factor-α (TNF-α) [16]. The Salmonella T3SS effector protein SseL impairs IκBα ubiquitination and degradation [6]. To determine whether SseL also inhibits RPS3 nuclear translocation, we quantified the relative abundance of nuclear vs. cytoplasmic RPS3 in HEK293 cells in the presence or absence of transfected SseL-HA after TNF stimulation. As expected, the nuclear abundance of RPS3 significantly increased after TNF treatment. EHEC NleH1, a positive control, significantly decreased RPS3 nuclear translocation. The nuclear abundance of RPS3 was reduced in nuclear fractions containing SseL, while cytoplasmic RPS3 concentrations were unchanged. SseL was detected only in the cytoplasm. Quantitative analysis of RPS3 abundance revealed that SseL significantly reduced the relative abundance of nuclear RPS3 after TNF stimulus (Figure 1).

To determine whether SseL interacts with RPS3 in mammalian cells, we performed co-immunoprecipitation experiments. After co-transfecting either FliC-HA (as a negative control), NleH1-HA (as a positive control), or SseL-HA with FLAG-RPS3, cell lysates were immunoprecipitated with anti-FLAG M2 beads and subsequently immunoblotted. NleH1-HA and SseL-HA, but not FliC-HA, interacted with FLAG-RPS3 (Figure 2A). To determine whether SseL binds directly to RPS3, we conducted GST pulldown assays. As NleH1 is known to bind to RPS3 [19], we used GST-NleH1 as a positive control and GST-NleB1 as a negative control [23]. Purified GST-NleH1, GST-NleB1, and GST-SseL were immobilized on GST beads and incubated with RPS3-His. RPS3 was enriched in the NleH1 and SseL pulldown samples, as compared to the negative control (Figure 2B). Thus, SseL interacts with RPS3 in mammalian cells and binds directly to RPS3 in vitro.

Mutating SseL C262 abolishes its ability to hydrolyze ubiquitin [22]. To determine whether SseL C262 is required for its interaction with RPS3, we mutated C262 into alanine and performed co-immunoprecipitation and GST pulldown assays. We observed that both SseL wild-type and SseL C262A interacted with RPS3 (Figure 4A), and they both bound directly to RPS3 (Figure 4B), indicating that this residue is not essential for SseL binding to RPS3. The SseL C262A mutant, in contrast to SseL wild-type, showed a reduced ability to deubiquitinate RPS3 after co-transfection (Figure 4C). RPS3 deubiquitination by SseL was restricted to K63 linkages (Figure 4D).
To determine whether SseL DUB activity is important for inhibiting RPS3 nuclear translocation, we transfected HEK293T cells with WT SseL-HA or SseL(C262A)-HA and evaluated the relative abundance of nuclear vs. cytoplasmic RPS3. The nuclear abundance of RPS3 was unchanged in the nuclear fraction of cells transfected with SseL(C262A), but was significantly inhibited in cells transfected with SseL wild-type (Figure 4E). To evaluate whether SseL alters RPS3/NF-κB-dependent gene expression, we performed quantitative RT-PCR experiments to assess whether SseL reduced the ability of TNF-α to activate the expression of IL-8, a gene that is dependent upon RPS3 for maximal expression [19]. TNF-α induced IL-8 expression was significantly inhibited by WT SseL but not by SseL(C262A) (Figure 4F), showing the biological significance of how the SseL-mediated reduction in RPS3 nuclear abundance affects host transcriptional responses associated with innate immunity. Taken together, our data suggest that SseL functions as a DUB that inhibits RPS3 nuclear translocation by deubiquitinating RPS3 (Figure 5).

Here we further examined the mechanism of RPS3 nuclear translocation and gained novel insights into the importance of RPS3 ubiquitination in this process. We provide evidence that the Salmonella effector SseL binds to RPS3 and functions as a DUB to inhibit its nuclear translocation. RPS3 was identified as a “specifier” component in NF-κB complexes [26]. RPS3 guides NF-κB to specific κB sites by increasing the affinity of the NF-κB p65 subunit for target gene promoters [16].
Evidence is emerging that some ribosomal proteins have extraribosomal functions that affect NF-κB signaling. The ribosomal protein rpL3 stabilizes IκBα to inhibit p65 nuclear translocation in p53-mutated cells, thus reducing IL-8 production [27]. TNF-induced synthesis of H2S sulfhydrates the C38 residue of the NF-κB p65 subunit and promotes p65 association with RPS3 to enhance the expression of cytoprotective genes [28]. Human RPS3 contains 20 lysine residues that are potential ubiquitination sites [29,30,31]. The unfolded protein response triggers ubiquitination of RPS3 K214 [32]. Regulatory RPS3 ubiquitination catalyzed by ZNF598 plays a pivotal role in regulating mammalian ribosome-associated quality control pathways [24,25,33]. RPS3 was also shown to interact with p53 [34], but its mono-ubiquitination is independent of p53 [24].
Non-ribosomal RPS3 is protected from ubiquitination and proteasome-dependent degradation by interacting with Heat shock protein 90 (Hsp90), which helps retain the function and biogenesis of the ribosome [35]. There is little information available concerning the role of RPS3 ubiquitination in its nuclear translocation, although it is known that nuclear RPS3 can be ubiquitinated by ring finger protein 138 (RNF138) [8]. This ubiquitination leads to RPS3 degradation and affects radioresistance [8]. As no active E3 ligase that is specific to RPS3 is commercially available, we were unable to perform experiments to detect RPS3 ubiquitination and deubiquitination in vitro.
Two E. coli effectors inhibit RPS3 nuclear translocation; NleH1 inhibits RPS3 phosphorylation by IKK-β an essential aspect of the RPS3 nuclear translocation process [19]. NleC proteolysis of p65 generates an N-terminal p65 fragment that competes for full-length p65 binding to RPS3, thus also inhibiting RPS3 nuclear translocation [20]. We examined whether Salmonella effectors also target this pathway, and, by using nuclear fractionation and transfection experiments, we observed a significant reduction in nuclear RPS3 abundance by expressing SseL (Figure 1). SseL interacted with RPS3 in mammalian cells and bound directly to RPS3 in vitro (Figure 2). SseL deubiquitinated RPS3 in transfected mammalian cells (Figure 3). However, we were unable to confirm this activity by performing in vitro deubiquitination assays, as no specific E3 ligase for RPS3 is available.
Ubiquitination plays an important role in regulating protein localization [36,37], and there is a precedent for K63-linked polyubiquitination in regulating the relative cytoplasmic vs. nuclear abundance of proteins [38]. In the context of SseL, deubiquitination of K63-RPS3 significantly reduced the extent of RPS3 nuclear translocation (Figure 4). This phenotype was dependent upon SseL DUB activity, as the SseL C262A mutant had no impact on RPS3 nuclear translocation. Overall, we propose that, similarly to E. coli, an important aspect of Salmonella virulence may be that Salmonella injected at least one effector through their conserved T3SS into host cells where they interfere with host cell signaling cascades, particularly the RPS3 signaling, to modulate host innate immune responses to the pathogen’s advantage.

P.R.H. conceived and coordinated the study and wrote the paper. M.W. and S.E.Q. performed and analyzed the experiments. All authors reviewed the results and approved the final version of the manuscript.

The project described was supported by grant number AI099002 from the National Institute of Allergy and Infectious Diseases (NIAID) to PRH. Its contents are solely the responsibility of the authors and do not necessarily represent the official views of the NIAID. 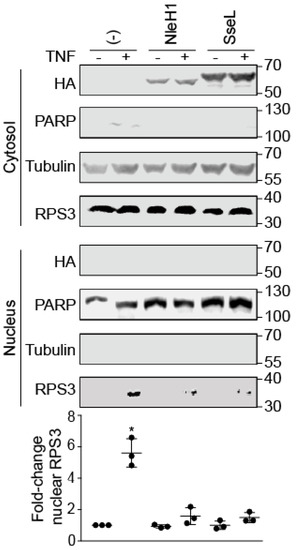 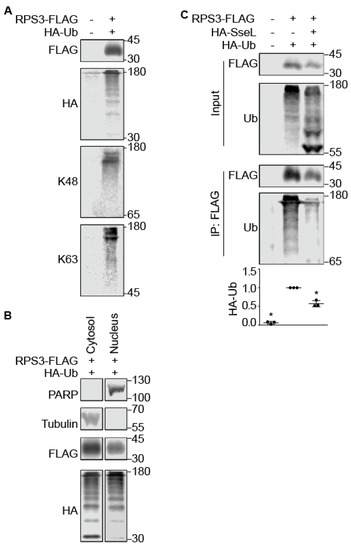 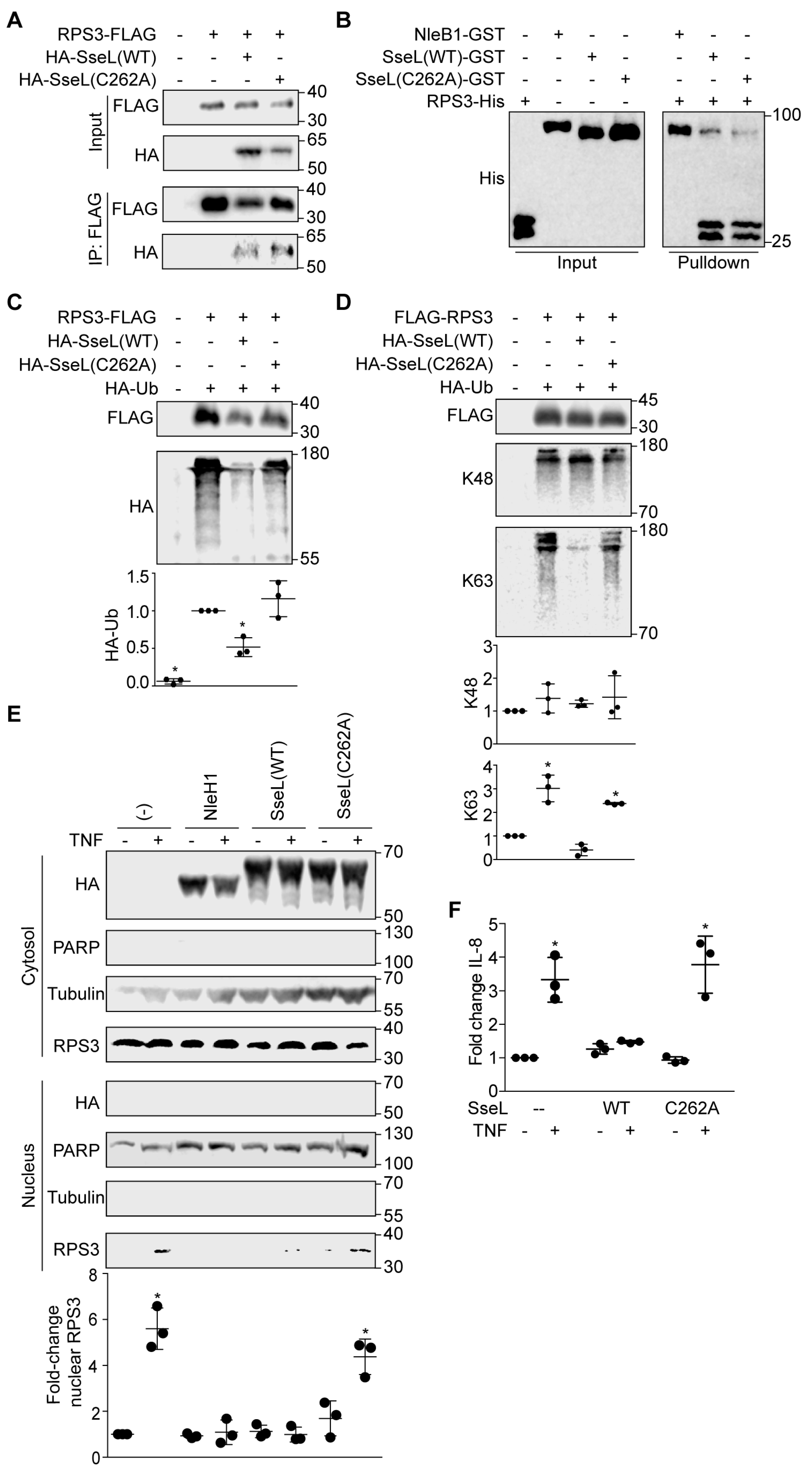 Table 1. Strains and plasmids used in this study.
Table 1. Strains and plasmids used in this study.
© 2018 by the authors. Licensee MDPI, Basel, Switzerland. This article is an open access article distributed under the terms and conditions of the Creative Commons Attribution (CC BY) license (http://creativecommons.org/licenses/by/4.0/).
We use cookies on our website to ensure you get the best experience. Read more about our cookies here.
Accept
We have just recently launched a new version of our website. Help us to further improve by taking part in this short 5 minute survey here. here.
Never show this again