Neofusicoccum mediterraneum Is Involved in a Twig and Branch Dieback of Olive Trees Observed in Salento (Apulia, Italy)

Olive trees are infected and damaged by Botryosphaeriaceae fungi in various countries. The botryosphaeriaceous fungus Neofusicoccum mediterraneum is highly aggressive and is a major concern for olive groves in Spain and California (USA), where it causes ‘branch and twig dieback’ characterized by wood discoloration, bark canker, and canopy blight. During surveys of olive groves in Apulia (southern Italy), we noticed that—in some areas—trees were heavily affected by severe branch and twig dieback. In addition, chlorosis and the appearance of red-bronze patches on the leaf preceded the wilting of the foliage, with necrotic leaves persisting on the twigs. Given the severity of the manifestation in zones also subject to olive quick decline syndrome (OQDS) caused by Xylella fastidiosa subsp. pauca, we investigated the etiology and provide indications for differentiating the symptoms from OQDS. Isolation from diseased wood samples revealed a mycete, which was morphologically and molecularly identified as N. mediterraneum. The pathogenicity tests clearly showed that this fungus is able to cause the natural symptoms. Therefore, also considering the low number of tested samples, N. mediterraneum is a potential causal agent of the observed disease. Specifically, inoculation of the twigs caused complete wilting in two to three weeks, while inoculation at the base of the stem caused severe girdling wedge-shaped cankers. The growth rate of the fungus in in vitro tests was progressively higher from 10 to 30 °C, failing to grow at higher temperatures, but keeping its viability even after prolonged exposure at 50 °C. The capacity of the isolate to produce catenulate chlamydospores, which is novel for the species, highlights the possibility of a new morphological strain within N. mediterraneum. Further investigations are ongoing to verify whether additional fungal species are involved in this symptomatology. View Full-Text
Keywords: olive tree; Botryosphaeriaceae; Neofusicoccum mediterraneum; branch and twig dieback; Xylella fastidiosa; olive quick decline syndrome OQDS; wilting; canker olive tree; Botryosphaeriaceae; Neofusicoccum mediterraneum; branch and twig dieback; Xylella fastidiosa; olive quick decline syndrome OQDS; wilting; canker
►▼ Show Figures 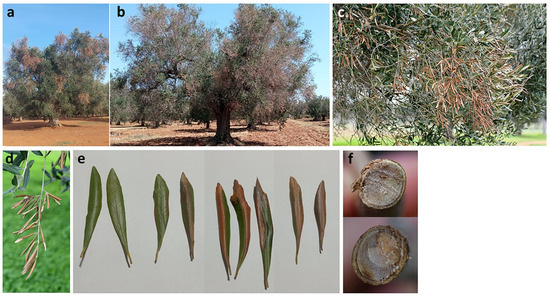