Zoonotic pathogen transmission is considered a leading threat to the survival of non-human primates and public health in shared landscapes. Giardia spp., Cryptosporidium spp. and Microsporidia are unicellular parasites spread by the fecal-oral route by environmentally resistant stages and can infect humans, livestock, and wildlife including non-human primates. Using immunoassay diagnostic kits and amplification/sequencing of the region of the triosephosphate isomerase, small ribosomal subunit rRNA and the internal transcribed spacer genes, we investigated Giardia, Cryptosporidium, and microsporidia infections, respectively, among humans, domesticated animals (livestock, poultry, and dogs), and wild nonhuman primates (eastern chimpanzees and black and white colobus monkeys) in Bulindi, Uganda, an area of remarkably high human–animal contact and spatial overlap. We analyzed 137 fecal samples and revealed the presence of G. intestinalis assemblage B in two human isolates, G. intestinalis assemblage E in one cow isolate, and Encephalitozoon cuniculi genotype II in two humans and one goat isolate. None of the chimpanzee and colobus monkey samples were positive for any of the screened parasites. Regular distribution of antiparasitic treatment in both humans and domestic animals in Bulindi could have reduced the occurrence of the screened parasites and decreased potential circulation of these pathogens among host species. View Full-Text
Keywords: Giardia; Cryptosporidium; microsporidia; non-human primates; humans; domestic animals; anthropogenic disturbance; coproantigen; PCR; Uganda Giardia; Cryptosporidium; microsporidia; non-human primates; humans; domestic animals; anthropogenic disturbance; coproantigen; PCR; Uganda
►▼ Show Figures 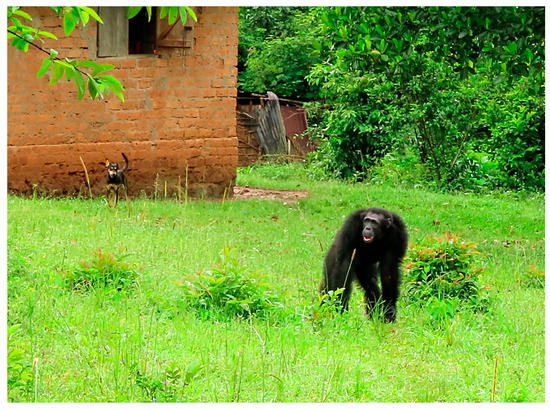