Serotonin Levels in the Serum of Persons with Onchocerciasis-Associated Epilepsy: A Case-Control Study
Previous Article in Special Issue

Performance of the LIAISON® SARS-CoV-2 Antigen Assay vs. SARS-CoV-2-RT-PCR

Saliva plays major roles in the human-to-human transmission of SARS-CoV-2. If the virus in saliva in SARS-CoV-2-infected individuals can be rapidly and efficiently inactivated by a beverage, the ingestion of the beverage may attenuate the spread of virus infection within a population. Recently, we reported that SARS-CoV-2 was significantly inactivated by treatment with black tea, green tea, roasted green tea and oolong tea, as well as their constituents, (-) epigallocatechin gallate (EGCG), theasinensin A (TSA), and galloylated theaflavins. However, it remains unclear to what extent tea inactivates the virus present in saliva, because saliva contains various proteins, nitrogenous products, electrolytes, and so on, which could influence the antivirus effect of tea. Here, we assessed whether tea inactivated the SARS-CoV-2 which was added in human saliva. A virus was added in healthy human saliva in vitro, and after treatment with black tea or green tea, the infectivity of the virus was evaluated by TCID50 assays. The virus titer fell below the detectable level or less than 1/100 after treatment with black tea or green tea for 10 s. The black tea-treated virus less remarkably replicated in cells compared with the untreated virus. These findings suggest the possibility that the ingestion of tea may inactivate SARS-CoV-2 in saliva in infected individuals, although clinical studies are required to determine the intensity and duration of the anti-viral effect of tea in saliva in humans. View Full-Text
Keywords: novel coronavirus; COVID-19; tea; catechin; theaflavin; saliva novel coronavirus; COVID-19; tea; catechin; theaflavin; saliva
►▼ Show Figures 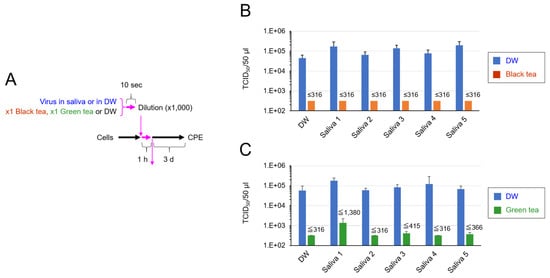