Epidemiology and Laboratory Diagnostics of Dengue, Yellow Fever, Zika, and Chikungunya Virus Infections in Africa
Next Article in Special Issue

Concern for Dirofilaria immitis and Macrocyclic Lactone Loss of Efficacy: Current Situation in the USA and Europe, and Future Scenarios

Dirofilaria immitis infection is one of the most severe parasitic diseases in dogs. Prevention is achieved by the administration of drugs containing macrocyclic lactones (MLs). These products are very safe and highly effective, targeting the third and fourth larval stages (L3, L4) of the parasite. Until 2011, claims of the ineffectiveness of MLs, reported as “loss of efficacy” (LOE), were generally attributed to owners’ non-compliance, or other reasons associated with inadequate preventative coverage. There was solid argumentation that a resistance problem is not likely to occur because of (i) the great extent of refugia, (ii) the complexity of resistance development to MLs, and (iii) the possible large number of genes involved in resistance selection. Nevertheless, today, it is unequivocally proven that ML-resistant D. immitis strains exist, at least in the Lower Mississippi region, USA. Accordingly, tools have been developed to evaluate and confirm the susceptibility status of D. immitis strains. A simple, in-clinic, microfilariae suppression test, 14-28 days after ML administration, and a “decision tree” (algorithm), including compliance and preventatives’ purchase history, and testing gaps, may be applied for assessing any resistant nature of the parasite. On the molecular level, specific SNPs may be used as markers of ML resistance, offering a basis for the validation of clinically suspected resistant strains. In Europe, no LOE/resistance claims have been reported so far, and the existing conditions (stray dogs, rich wildlife, majority of owned dogs not on preventive ML treatment) do not favor selection pressure on the parasites. Considering the genetic basis of resistance and the epizootiological characteristics of D. immitis, ML resistance neither establishes easily nor spreads quickly, a fact confirmed by the current known dispersion of the problem, which is limited. Nevertheless, ML resistance may propagate from an initial geographical point, via animal and vector mobility, to other regions, while it can also emerge as an independent evolutionary process in a new area. For these reasons, and considering the current chemoprophylaxis recommendations and increasing use of ML endectoparasiticides as a potential selection pressure, it is important to remain vigilant for the timely detection of any ML LOE/resistance, in all continents where D. immitis is enzootic. View Full-Text
Keywords: Dirofilaria immitis; macrocyclic lactones; resistance; diagnosis; treatment; prevention Dirofilaria immitis; macrocyclic lactones; resistance; diagnosis; treatment; prevention
►▼ Show Figures 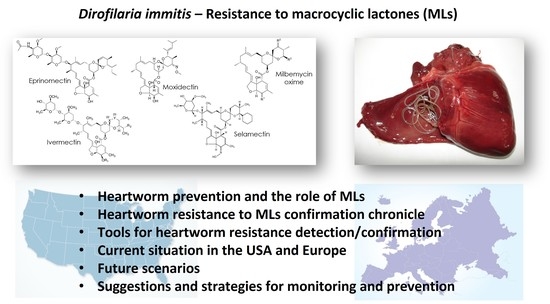