Folklore in China: Past, Present, and Challenges
Next Article in Special Issue

Reconsidering the Image of the Blue Bra: Photography, Conflict, and Cultural Memory in the 2011–2013 Egyptian Uprising

This essay intervenes in debates about the depiction of conflict since 1945, by comparing two highly significant photographic ‘hacks’: Brecht’s War Primer (Kriegsfibel) 1955; and Broomberg & Chanarin’s War Primer 2, 2011. Kriegsfibel is a collection of images, snipped from wartime newspapers and magazines, which Brecht selected and situated alongside the four-line verses that he used to comment upon and re-caption his pictures. These acerbic ‘photo–epigrams’ captured Brecht’s view, firstly, that photography had become a ‘terrible weapon against truth’ and secondly, that by repositioning the individual image, its political instrumentality might be restored. When, more than half a century later, Broomberg & Chanarin decide to re-work Kriegsfibel to produce War Primer 2, they effectively crash into and redouble the Brechtian hack; updating and further complicating Brecht’s insights; re-animating his original concerns with photography as a form of collective historical elucidation and mounting, literally on top of his pictures of wartime conflict, images from the ‘war on terror’. This essay argues that the re-doubling of War Primer performs multiple critical tasks. It explores the Kriegsfibel as a dynamic confrontation with images of war and stages the enduring need to interrogate and actively re-function images of conflict from WW2 to the present day. It re-examines debates about images as weapons of war in themselves, and finally, it situates the Kriegsfibel assemblage in relation to contemporary understandings of ‘post-truth’. View Full-Text
Keywords: Brecht’s Kriegsfibel; Broomberg & Chanarin; war/anti-war photography; hack/hijack; radical pedagogy; truth-games; anachronism; interventionist thinking Brecht’s Kriegsfibel; Broomberg & Chanarin; war/anti-war photography; hack/hijack; radical pedagogy; truth-games; anachronism; interventionist thinking
►▼ Show Figures 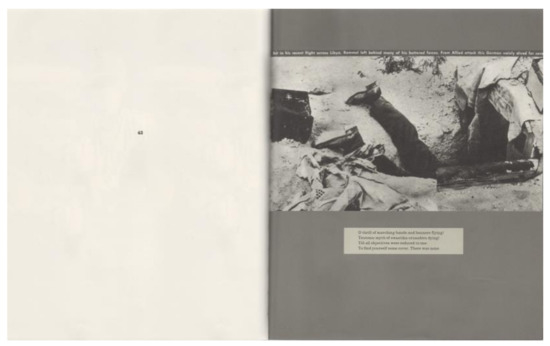