Both Parents Working: Challenges and Strains in Managing the Reconciliation of Career and Family Life in Dual-Career Families. Empirical Evidence from Austria
Next Article in Special Issue

The Black Criminal Other as an Object of Social Control

Noise Complaints between Japanese Neighbors and Migrants in Rural Japan: From the Perspectives of Noisemakers

This paper focuses on the narratives and embodiment of noisemakers in noise complaints in a small town of rural Japan. By building on the intersection of sound studies, body, and migration, this paper aims to critically address the longstanding concept of ‘noise’ through the overlooked perspectives of migrants who are perceived as ‘noisemakers’ in the neighbor relations between Japanese neighbors and migrants. This study was conducted through months of fieldwork in a small town in Japan, wherein an ethnic concentration of Japanese descendants from North Sulawesi, Indonesia has been established for almost two decades. Sensory ethnography was adopted in addition to participant observation and in-depth interviews that presented the narratives of five Japanese descendants working in seafood processing factories. The findings suggest that perception of the ‘unwanted’ bodily presence becomes a salient metaphorical sense of ‘noise’ which is embodied in migrants as byproducts of the psychological noise of the hearers. This ‘noise’ evokes series of complaints which also escalate into space control in the neighborhood. More than just neighbor relations in negotiating private–public spaces, the phenomena of noisemaking and noise complaints in this study are layered with overlapping unequal social and power structures concerning neighbors, workers, and migrants with stigma of gaijin and ‘noisemakers’. View Full-Text
Keywords: noise; noisemakers; complaints; body; neighbor relations; migrants; Japan noise; noisemakers; complaints; body; neighbor relations; migrants; Japan
►▼ Show Figures 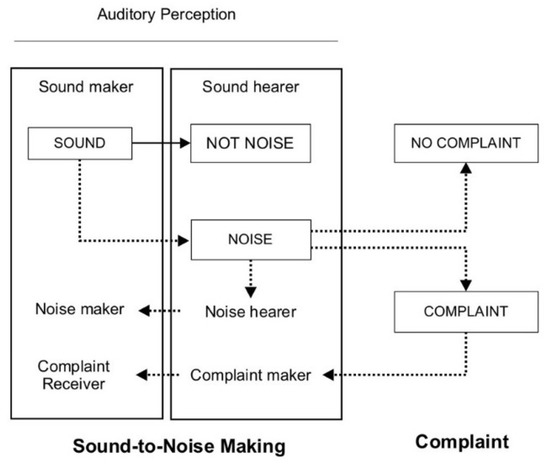 Mutiara, M. Noise Complaints between Japanese Neighbors and Migrants in Rural Japan: From the Perspectives of Noisemakers. Soc. Sci. 2018, 7, 268.


Mutiara M. Noise Complaints between Japanese Neighbors and Migrants in Rural Japan: From the Perspectives of Noisemakers. Social Sciences. 2018; 7(12):268.


Mutiara, Median. 2018. "Noise Complaints between Japanese Neighbors and Migrants in Rural Japan: From the Perspectives of Noisemakers." Soc. Sci. 7, no. 12: 268.