Using the Lens of ‘Possible Selves’ to Explore Access to Higher Education: A New Conceptual Model for Practice, Policy, and Research
Previous Article in Journal

Applying risk and resilience frameworks that highlight mechanisms is important to consider for adolescent outcomes. This is especially true when considering outcomes for youth of color. Hence, we turned to Spencer’s (1995) Phenomenological Variant of Ecological Systems Theory (PVEST) and a resilience framework (Fergus and Zimmerman 2005). The PVEST framework considers the effects of contextual issues (e.g., social, cultural) on the development of African American youth (Spencer 1999). Within the PVEST framework, Spencer et al. (2003) highlight the importance of examining contributors of risk (e.g., racial discrimination) and how they have been found to be directly related to adverse outcomes. Additionally, Spencer et al. (1997), highlight the importance of coping responses that are pertinent for youth of color. Within the current study, we examine the effects of the perceptions of school-based discrimination by both peers and teachers, which is conceptualized as net stress engagement within the PVEST framework. These net stress factors may be linked to a reduction in positive academic outcomes for the youth. On the other hand, the protective factor of ethnic-racial socialization may mitigate the effects of perceived racial discrimination for the youth and be linked to more adaptive outcomes, such as higher academic achievement and positive academic self-efficacy and self-concept. The model by Fergus and Zimmerman (2005) also highlights the importance of protective and compensatory factors for youth outcomes. Protective factors are those assets or resources that reduce the impact of a negative outcome. Fergus and Zimmerman (2005) provide the example of how parental support may be a protective factor between the effects of poverty on violent behavior. In this example, the presence of parental support may reduce the effects of poverty on reported violent behavior. Within the compensatory model, Fergus and Zimmerman (2005) identify compensatory factors as those that provide a direct effect of a promotive factor on an outcome that is independent of the effect of the risk factor. For example, Fergus and Zimmerman discuss how adult monitoring may be viewed as a compensatory factor in the relation between poverty and violent behavior. We expect racial-ethnic socialization to function as either a protective or compensatory factor for African American adolescents.

Perceived School-Based Discrimination assessed adolescents’ perceptions of racial discrimination committed by their teachers and peers. This measure was developed by Eccles et al. for the Maryland Adolescent Development in Contexts Study (MADICS; Wong et al. 2003). There are two subscales to this measure: One assesses perceived teacher discrimination and the other assesses perceived peer discrimination. The five-item perceived teacher discrimination scale asked adolescents how often they were treated negatively by their teachers in the classroom because they are Black, such as not being called on in class. The four-item perceived peer discrimination scale assessed negative race-related treatment by peers at school because they are Black, including not being picked for teams. Participants were asked to indicate their responses on a five-point scale from 1 = “Never” to 5 = “Almost every day”. Cronbach’s alphas were 0.86 and 0.82 respectively for the current sample. Please see Appendix A and Appendix B.
Ethnic-Racial Socialization was measured using the Hughes and Chen (1997) measure of adolescents’ perceptions of their parents’ ethnic-racial socialization messages and practices. The measure is comprised of two subscales, which are preparation for bias and cultural socialization. The four-item preparation for bias subscale assessed parental messages related to possible discrimination and racial coping. Preparation for bias items included: “Talked to you about the fight for equality among Blacks”; “Said that people might try to limit him/her because of race”.
The seven-item cultural socialization subscale measured parental messages about cultural pride and heritage. Cultural socialization items included: “Talked about being proud to be Black”; “Read Black storybooks”. High scores on these subscales indicated a greater frequency of providing the child with racial socialization messages. Both scales had adequate internal consistency for the current sample (Preparation for bias scale = 0.91 and cultural socialization scale = 0.77).

Academic Persistence was adapted from the Wellborn (1991) measure of classroom persistence. This scale examines adolescents’ re-engagement with material after difficulty or failure. Participants were asked to rate their answers on a four-point scale (1 = “not at all true” to 4 = “very true”). A sample item from this measure is: “If I can’t get a problem right the first time, I just keep trying”. Academic persistence had an alpha of 0.73 for the current sample.
The Academic Self-Concept was adapted from Nicholls (1979) measure on children’s reports of self-concept. This measure taps into children’s perceptions of their own academic abilities in school subjects relative to their age mates. Participants were asked to rate their ability in comparison to other children the same age (e.g., “In reading I am…”) on a seven-point scale, ranging from “much worse” to “much better”. The scale comprised the average of the responses to the five items that include self-concept ratings in math, reading, general intelligence, grades, and writing.
The Academic Efficacy measure was developed by Hoover-Dempsey and Sandler (2005). This seven-item measure assesses children’s beliefs about their abilities to successfully complete their schoolwork. Children were asked to indicate how often they felt each of the statements on a sour-point scale, ranging from 1 = “never” to 4 = “always”. A sample item is: “Homework is easy for me”. The alpha for the current sample of this measure was 0.84.
Perceptions of Academic Ability was also adapted from the Nicholls (1979) measure of children’s academic self-concept. This scale asked parents to report their perceptions of their children’s academic ability in school subjects, relative to classmates. Similar to the youth scale, this scale was composed of parents’ perceptions of their child’s abilities in math, reading, general intelligence, grades, and writing. Parents were asked to rate their children on a seven-point scale and the scale had an alpha of 0.88 for the current study.
Perceptions of Academic Preparedness was created by Rowley (2004). This scale comprised two items that assess parents’ perceptions of their child’s preparation for homework and for tests. This scale had an alpha of 0.80 for the current study. Parents were asked to rate their child’s preparedness on a five-point scale.

The current study was part of the Middle School Experiences Study (MSES), a larger study of race-related factors in African American middle schoolers’ achievement motivation. Letters were mailed to families within middle schools in the two different districts. The letters were sent to those who self-identified as having a child who was African American. Interested individuals were asked to contact us either via email or phone. Participants were enrolled in the study following a brief screening for eligibility. Surveys were completed either in the participant’s home or at the research lab and took, on average, an hour and half to complete. Adolescents completed questionnaires that asked about their experiences with racial discrimination, academic achievement and perceptions of racial socialization practices by their parents. Parents completed a similar set of surveys that included reporting their educational level and the frequency of participation in racial socialization messages and practices. At the completion of the survey, adolescents were given a free movie pass and parents received a $25 gift card.

A strength of this study was its focus on school-based discrimination and inclusion of parent reports of academic ability in addition to student self-report. Though this paper adds to the current literature, there are a few limitations that must be noted. To reduce the possibility of bias in self-reports, future studies should focus on measures collected from teachers, peers, and parents to fully understand the impact of school-based discrimination. Teacher and peer perceptions of discrimination may provide greater depth in understanding the relationship between the classroom environment and student outcomes (Byrd and Andrews 2016). This study was also cross-sectional in nature and can only provide the reader with a glimpse of what is occurring currently. It could be that African American parents were providing racial socialization messages to their children in response to discussions about school-based discrimination. Thus, longitudinal designs should be employed in future research to understand the connection between ethnic-racial socialization, racial discrimination, and academic outcomes from the beginning to the end of middle school. By studying these variables longitudinally, we will have a better understanding of the protective nature of ethnic-racial socialization within the context of racial discrimination. Furthermore, by employing longitudinal designs, we can pinpoint when perceptions of racial discrimination are the most salient and influential for this developmental stage. Future work should also consider other outcomes that are not related to self-report, such as achievement, teacher ratings of behavior, or sports achievement.

M.B. came up with the manuscript idea, collected the data, cleaned and analyzed the data and was the primary authors on all the sections of the manuscript. C.B. helped with the collection of data, the analysis of the data as well as writing of the introduction, results and discussion. S.R. is the principal investigator on the project, she also created some of the parent academic involvement scales, she also helped with the writing of the introduction and the discussion as well as confirming the analyses of the results. 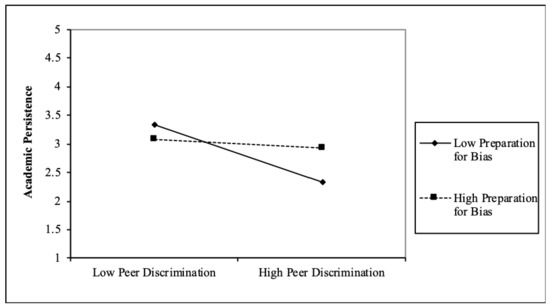 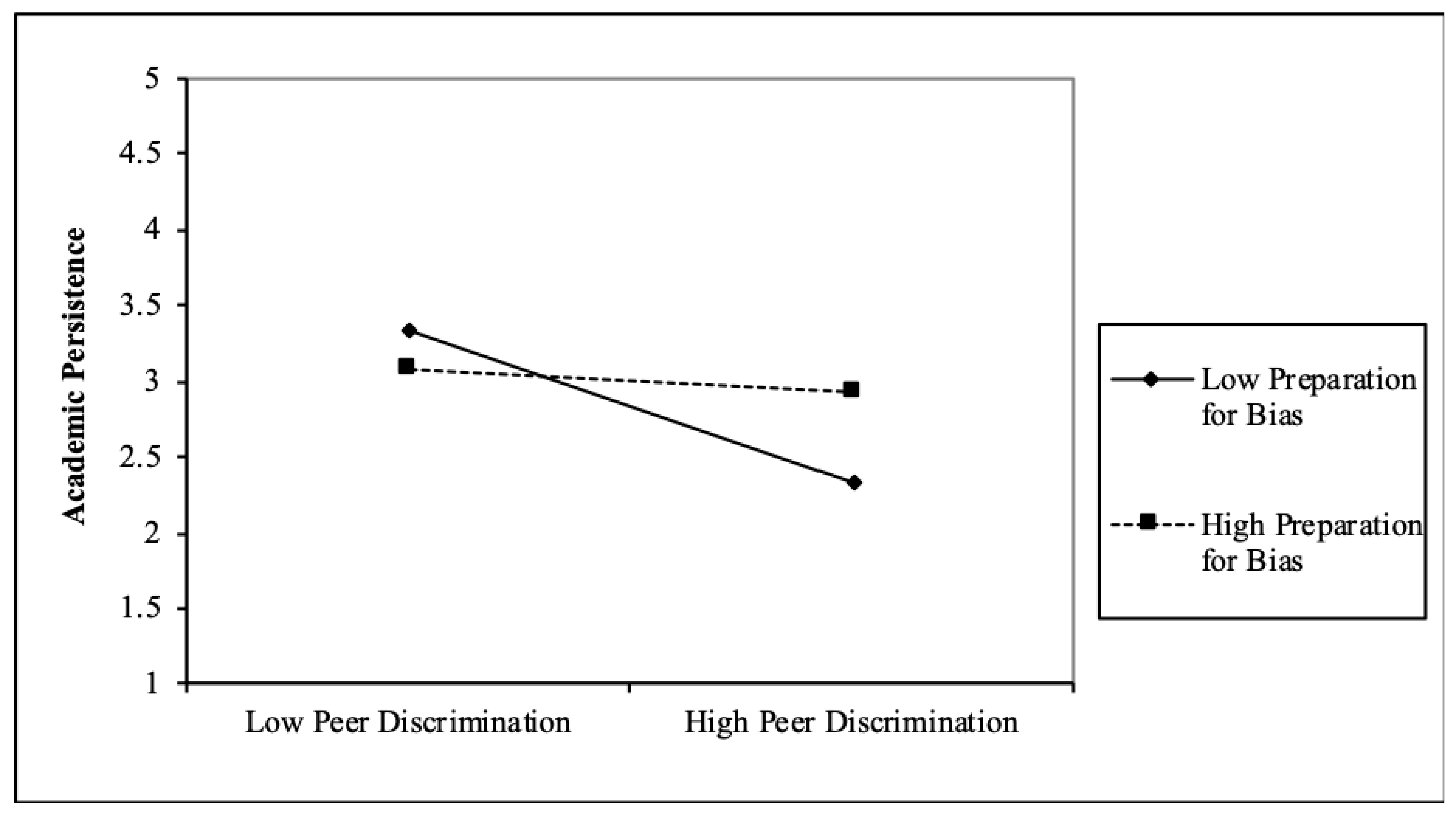