This study aimed to contribute to knowledge about contexts of violent assault perpetrated by white working-class teenage boys in Scotland. Despite studies exploring Scotland’s adolescent street gangs, there remains a gap in research where the collateral damage caused by gangs to others of the same class, age, and gender has gone unrecognized. Drawing upon insights from qualitative interviews with young, male, former offenders in Scotland we found that violence contained a strategic logic designed to foster bonding to a delinquent group, whilst offering a celebrity status and manliness. The co-presence of a violent culture worsened the likelihood of ameliorating mentalities associated with anti-social behaviors, which appear endemic to masculinity. That context of violence is associated with the criminal offending of boys who, though they may not be gang members, were nevertheless ‘contaminated’ by the aggressive shadow cast by the protest masculinity of gang-conflicted territories in disadvantaged neighborhoods. View Full-Text
Keywords: gangs; violence; Scotland; sub-culture; Glasgow gangs; violence; Scotland; sub-culture; Glasgow
►▼ Show Figures 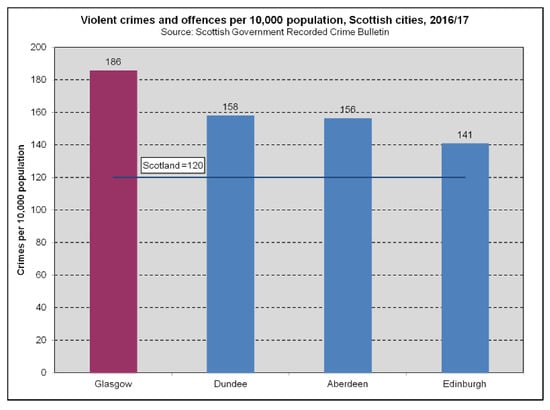