The Medieval Synagogue of Molina de Aragón: Architecture and Decoration
Next Article in Special Issue

It’s All in the Reading
Previous Article in Journal

Mapping a New Humanism in the 1940s: Thelma Johnson Streat between Dance and Painting
Previous Article in Special Issue

Exploring Appropriation as a Creative Practice

The Great Orbital Run was a solitary run/artwork that took place over nine days around the inside boundary of the M25 London Orbital. The journey was mapped through a stream of photographs and GPS coordinates relayed live from a mobile phone to a web interface and shown as a projected artwork at the University of Greenwich, London. It was later re-configured as the M25 in 4000 images, a unique concertina bookwork/sculpture produced from digital data into tangible, printed paper form. Cut, folded, and constructed by hand, it makes visible the mass of images that embody the running activity and the terrain it represents. This essay considers this artwork and its status as a document and artist’s book, reflecting on (1) the original running activity, (2) the mapping of the boundary of Greater London, (3) the performance of technology in relaying the run, and (4) the transformation of digital images into material form. The document is considered in relation to the run as a performance and in relation to its performative potential. This is extended to the documentary properties of the artists’ book as ‘a form of three-dimensional representation’ that, through its ‘agency’, aligns itself with spatial practice. View Full-Text
Keywords: running; performance art; the body; technology; digital image; mediation; documentation; artists’ books; spatial practice; agency running; performance art; the body; technology; digital image; mediation; documentation; artists’ books; spatial practice; agency
►▼ Show Figures 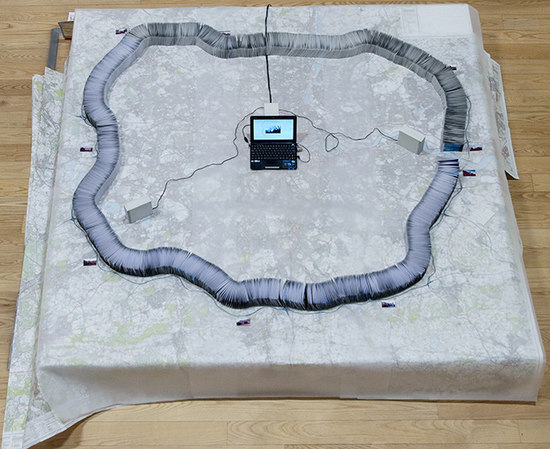