Exploring Appropriation as a Creative Practice

During the 1960s and 1970s, Ed Ruscha produced a series of 16 small, self-published books that became a catalyst for how artists could approach the book form. This reputation has grown through the subsequent decades, and his influence on book artists remains strong to this day to the extent that his books have been, and continue to be, appropriated across the world by successive generations of artists. Writing from a practitioner perspective, I will begin by looking at how Ruscha has become so influential to generations of book artists. I will look at what influenced him, and how he may possibly have appropriated the work of others. I will then focus in on the community of book artists who reference Ruscha’s books in their practice. The research of Ruscha’s books is embodied in each of these individual outcomes, but I will show that it is through the collective act and the bringing together of all of these books, through the community, that the work/s gain currency, strengthening both the Ruscha books and those that have come after.
Keywords: artists; books; book; art; arts; Ruscha; appropriation; print: book arts; artists books artists; books; book; art; arts; Ruscha; appropriation; print: book arts; artists books

During the 1960s and 1970s, the American artist Ed Ruscha produced a series of 16 small, self-published books that became a catalyst for how artists could approach the book form. While he was not the only artist of the time to consider the potential of books for dissemination via mass production and portability, his reputation has been cemented as a revolutionary in this new approach to artists’ books.
This reputation has grown through the subsequent decades, and his influence on book artists remains strong to this day to the extent that his books have been, and continue to be, appropriated across the world by successive generations of artists. Sometimes this appropriation is explicit and sometimes a little more obscure, with a direct reference or a knowing nod. Using his books as a “score” to be followed. Sometimes only done once, or for others the backbone of their output and a constant reference throughout their career, becoming part of their creative practice.
Through this essay I will begin by looking look at how Ruscha has become so influential to generations of book artists. I will look at what influenced him, and how he may possibly have appropriated the work of others. I will then focus in on the community of book artists who make with reference to Ruscha’s books. Since Bruce Nauman produced Burning Small Fires in reference to Ruscha’s Various Small Fires, these appropriated works have grown in number to the hundreds and have been represented in large exhibitions such as “Ed Ruscha Books & Co” at Gagosian, in publications such as Various Small Books, and through the “Follow-ed (after hokusai)” exhibitions I curated with Michalis Pichler.
Although all made with a similar reference point, these appropriated books are often made without the full knowledge of others who are doing the same. The research of Ruscha’s books is embodied in each of these individual outcomes, but I will show that it is through the collective act and the bringing together of all of these books, through the community, that the work/s gain currency, strengthening both Ruscha’s books and those that have come after.

Through the act of building and exhibiting these collections that all appropriate the work of one artist, and specifically his books, some sense begins to form. Brought together and viewed en masse, it is apparent that a community of knowledge is displayed in these books. The research of Ruscha’s books is embodied in each of the appropriated outcomes, which strengthens through the collective act. Both the Ruscha’s and those that come after. This community and collective has often not been aware of the other members until after the individual acts of appropriation. Much like the “collection” content of Ruscha’s books, it is through the collection that it gains currency.
This is not to say it does not have its detractors. Anne Moeglin-Delcroix, herself an early exhibitor of Ruscha inspired books, believes “the difficulty with such a superabundance is that it entails numbing, even anesthetizing, and a dumbing down. This affects all the books in the series […] What is most serious to my mind, is that this has a negative impact on Ruscha’s books: they are the first victims of this trivialisation” (Moeglin-Delcroix 2015). I disagree. As I have stated, I do not believe in most cases that those appropriating are aware of the community before embarking on their first book, they are not produced merely for “self promotion and self legitimization” (Ibid.), they are produced in response to Ruscha, using his books as the instructions, the score. Through admiration they are riffing on an existing work, or remixing it to understand the original and present it to a new or different audience. Much as has happened for decades in music, and in particular dance music. Mixing together, adding new lyrics, or MC’ing over the top. Creating something new that directly references its origins, but does not trivialise it. They co-exist and the new never diminishes the old. And after all, as Ruscha stated in conversation recently “somebody said all art comes from other art”.19
Ruscha has achieved a great many things as an individual, but his books caused such a schism in people’s thinking that they became a model that allowed artists to do things differently. When looking at art as a collective activity rather than as an individual pursuit, this superabundance does not diminish Ruscha’s books, but reinforces their greatness and shows their importance. As Pavel Büchler has stated, “culture is a collective activity; it’s not an individual activity […] The collective role of artists in forming the conditions of art is not really understood because we have a culture of individual accountability, measurement, detailed evaluation and categorization of everything we do from the moment we enter school until the moment we die. You can say that one way of looking at it is that the measure of an artist is what he or she enables others to do. So, Lucio Fontana is a very great artist. What matters is not if he advanced a certain idiom of painting but that he enabled an awful lot of people to do extraordinary sorts of things. It is a different perspective” (Reeve 2005).
Despite numerous interviews Ruscha says very little, or gives away very little, about his books. They retain an enigma which I think makes them attractive, and to understand them, you need to engage with them. And engaging with them too deeply, risks seeing them as a score to be performed again. For some it is just the look. Or the numbered naming system of a (photographic) collection. For others it is the systems. Or the subject matter. Or it is just a direct copy. With my collection, in some cases I have made the connection, being a little unsure if the artist is intentionally referencing Ruscha.
I have only presented here a selection of some of the books from my collection and the broader Ruscha rip-off genre. Print on demand publishing has facilitated an explosion in these books, as it is now so easy and cheap to produce a mass produced Ruscha knock-off book. Much like the adoption of existing book production and distribution techniques that Ruscha employed to circumnavigate the gallery system, with print on demand it has become even easier. Encompassed in a complete package of design, production, and distribution, artists no longer have the outlay expense of producing several hundred books to keep costs low. Print on demand allows the artist to self-publish with no gatekeeper and no initial outlay at all. The only time money is exchanged is when a copy is ordered, and it can just be one copy. An artist need not pay anything, rather use the online shop connected to the print on demand website to allow others to pay when they order a copy.
Consequently, these books keep coming and are often made without knowledge of wider environment and community of others. This collective body of knowledge keeps growing and gathering strength, and the collection is key to understanding this work. The collection of books, based on a collection of books, that explore collections. It truly makes sense when they are all viewed together. As Ruscha said of his own books: “When you go through the whole collection it begins to make some sense; it shows more about the attitude behind them than one of them does. One of them will kind of almost knock you on your ass” (Sharp 1973). 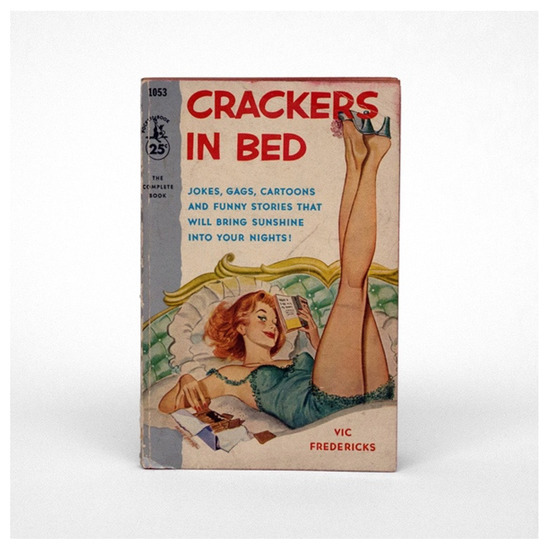