From the Application of Printings to Metal Inclusions in Glass: Development of Techniques

The possibility of the application of metal inclusions in glass initially arose in response to the requirements to be able to materialize the author’s artistic ideas. The research reported in this paper is based on (Bialek 2017) that was informed by, and built on, earlier experiments of using metals (Figure 1) and the immersion of prints in glass (Figure 2 and Figure 3).
The intention of the research was, using an earlier experience (Bialek 2000, 2003), firstly to develop techniques for the expansion of sculptors’ creative potential of combining glass in their studio practice. Secondly, the aim was to equip glass artists with a wider “palette” of inclusions for utilization of the “positive space” (internal space) in sculptures. Positive space is the space taken by an object, but the management of the internal space is possible only if the materials employed are transparent or semi-transparent, for example, glass (Figure 2, Figure 3 and Figure 4).
Hence, the idea was to consider an additional space to apply inclusions and the illusion of perspective. This led to the idea of utilizing the additional space in sculpture (particularly internal space) created by using transparent and semi-transparent materials.
This paper firstly surveys technological problems of applying metal inclusions in glass. Then, based on the literature survey and consultation with artists and technologists, it presents methods for the selection of suitable metals and techniques.

The most important reason for the research was to achieve a theoretical understanding of the application of inclusions, as this always brings some technical problems. The process of intentional inclusion always involves seeking to achieve a positive balance between materials if a combination of two or more different materials are involved, and especially if one of them is glass. Glass is a very complex material to work with and requires a great deal of knowledge and experience. Even experts cannot answer some questions pertaining to the technological problems of how to control the process of sticking glass to other materials during casting in high temperatures (Zasadzinski 2012, 2013, 2014, 2015; Hand 2014, 2015; Greiner-Wrona 2013, 2014, 2015). The investigation concentrated on a choice of the most suitable materials and adapting them, and the techniques of applying them to achieve the research goals. The main problem was to develop a technology which would deliver the desired results despite the problems encountered during the experiments. These problems were associated with the quality of the glass and materials available to artists on the market; the lack of information about the chemical and physical parameters of these materials; the compatibility, strength, and thickness of the inclusion materials; oxidation; and the fusion of glass, mold, and inclusion surfaces due to the high wetting parameters of materials at high temperatures. Most of these problems were solved during the investigation and through collaboration with metal and glass scientists. In the final research, two types of metals—nickel and lead tin alloys—were chosen because their chemical and physical properties are so different from each other. The most important difference is their melting points; nickel’s melting point is 1453 °C (Engineering ToolBox 2005), which is above the melting point of glass (600 °C), whereas lead’s melting point is 327.5 °C (Engineering ToolBox 2005), which is below that of glass. On the other hand, they have common features, which are also very important for this research. They are both sheen silver and corrosion resistant. Thanks to these properties and, at the same time, their diversity, it was hoped to realize some of their potential in their application in art works, and to further an understanding of the problems which the application of metal inclusions can involve.

4. Methods for the Selection of Suitable Metals and Application Techniques in Glass

4.1. Exploration to Prevent Metal Oxidation during the Heating Process

The best way to avoid the oxidation of metal inclusions during heating is to protect the metal from air. This can be achieved by tight-fit inclusions in glass. If inclusions are applied by fusing or cast kiln techniques, this can be achieved using waterjet.
To prevent oxidation of metals, the following methods can be used: overglaze, silver flakes (Figure 8), or coatings of metal with separators or lubricants, such as Borax, Flexi-Glass medium, jewelry enamels, graphites (Figure 9), clear varnish, transfers (Bialek 2017, pp. 164–71), or pouring hot glass onto metal (Figure 10).

4.2. Development of Separators and Lubricants

Experiments showed that the best separators between glass and the main body of the plaster mold are a layer of shelf wash and/or china clay with the addition of boron nitride (white graphite) on the top surface of the mold. These molds are high temperature resistant moulds, up to 900 °C (Figure 11).
These separators are quite effective in keeping the cast object clean from mold components. However, it was noted that the pouring of hot glass into plaster molds caused numerous gas bubbles (Figure 12). This is a known phenomenon among glassmakers, which causes them to avoid that technique.
It was noticed that a glass layer fired in the mold before pouring hot glass into the mold could act as an effective separator to reduce gas bubbles in the cast glass (Figure 10 and Figure 11).
To increase the possibility of using metal inclusions in glass, it is necessary to introduce appropriate lubricants or separators. A metal lubricant has to be applied to stop the process of wetting metal by glass in the hot stage, and a separator has to be applied to prevent oxidation of the metals and keeping the cast object clean from mold components. Experiments (Figure 8, Figure 9, Figure 10, Figure 11 and Figure 12) showed that many materials can fulfil these roles. Furthermore, even iron rust flakes or Gallium can also act as a separator or lubricant to prevent problems of incompatibility between some metals and glass (Bialek 2017, pp. 164–71).

As previously mentioned, the application of metal inclusions causes many problems such as bonding materials to each other, a difficulty to control the shape of inclusions, and oxidation and rusting of the metal surface during the heating process. To solve these problems, it was necessary to develop new methods for applications available in a studio and to develop new tools. One of the newly designed tools involved stamps in the shape and size of metal inclusions (both parts were cut with waterjet) to make an indentation into the hot glass that the inclusion fits exactly into (Figure 13).
These stamps, when frequently used at high temperatures, should maintain an unchanged shape and surface. Nickel alloy (Cronifer 1925) in the form of a 3-mm-thick sheet met these conditions (Bialek 2017, pp. 151–52) and, therefore, was selected for the production of stamps.

4.4. Development of Firing Programs; Consideration of Annealing of Glass and Metal Inclusions Together

Annealing is a heat process, whereby a metal is heated to a specific temperature and then allowed to cool slowly. The question becomes how to define the annealing temperature for both materials in the same process, if they have different stress point temperatures. That is why annealing as a part of the firing process needs special consideration. Each object has to be treated separately due to the process used, combinations of types of glass and metal, and the size of object (Bialek 2017, pp. 172–81). However, the basis to constitute a general program was developed by the masters, Brychtová and Libensky, for glass annealing (Bialek 2017, p. 177).
By addressing these challenges, with the help of experts and experimentation, it was possible to introduce industrial processes to creative practice and, thus, extend the options available to artists for working with metal and glass in a workshop.

This paper introduced the author’s practice-based research. Firstly, it presented the developed novel printing methodologies (in 2000–2003), exposing new methods to embed imagery into glass. The method was introduced in Kevin Petrie’s (2006) book. This technique of image transfer to glass was predominantly used on the surfaces of cast and blown glass. The innovation was to fuse and/or cast multiple printed surfaces to create graphic image layers within the glass. Secondly, the paper defined and examined problems occurring during the application of metal inclusions in glass and presented methods for the selection of suitable materials and techniques.
In more detail, this paper described developments made around the process of inserting metal into glass with the aim of making it more efficient and practical. Some of the findings made a unique contribution to the artistic practice, for example, the development of a technique for pouring hot glass into a plaster mold without producing glass-distorting bubbles (Figure 12), which was previously thought impossible.
This paper also described experiments that incorporated the heating and annealing processes of both glass and metal to produce bespoke casting processes for various combinations of metals and kinds of glass. These processes can then be used with highly temperature-resistant molds, separators/lubricants, and metal stamps to eliminate sticking of the glass to the molds in a studio setting. Through the application of different lubricants and separators, the experiments also addressed the major problems of oxidation and corrosion of metals.
The research described in this paper discussed how the application of metal inclusions can be achieved by understanding reactions of metals in different working conditions and during the cooling and annealing process, and by the development of appropriate, controlled processes to reduce the difficulties faced during the inclusion application in glass. This was possible to achieve through a review of specialist literature and through collaboration with materials engineers who specialize in metal and/or glass. On the basis of these experiences, it was concluded that, to reduce the problems of applications of metal inclusions in glass in creative use, it would be very helpful to widen the cooperation between scientists and artists, and to encourage the publication of literature based on scientific knowledge expressed in a way that would be understandable by artists.
It is hoped that the subject of this research will provide a stimulus to increase the cooperation between scientists and artists, as well as promote an understanding of inclusions through a different approach to this subject. 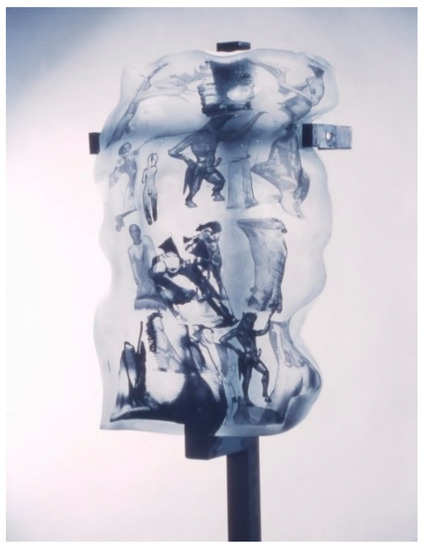 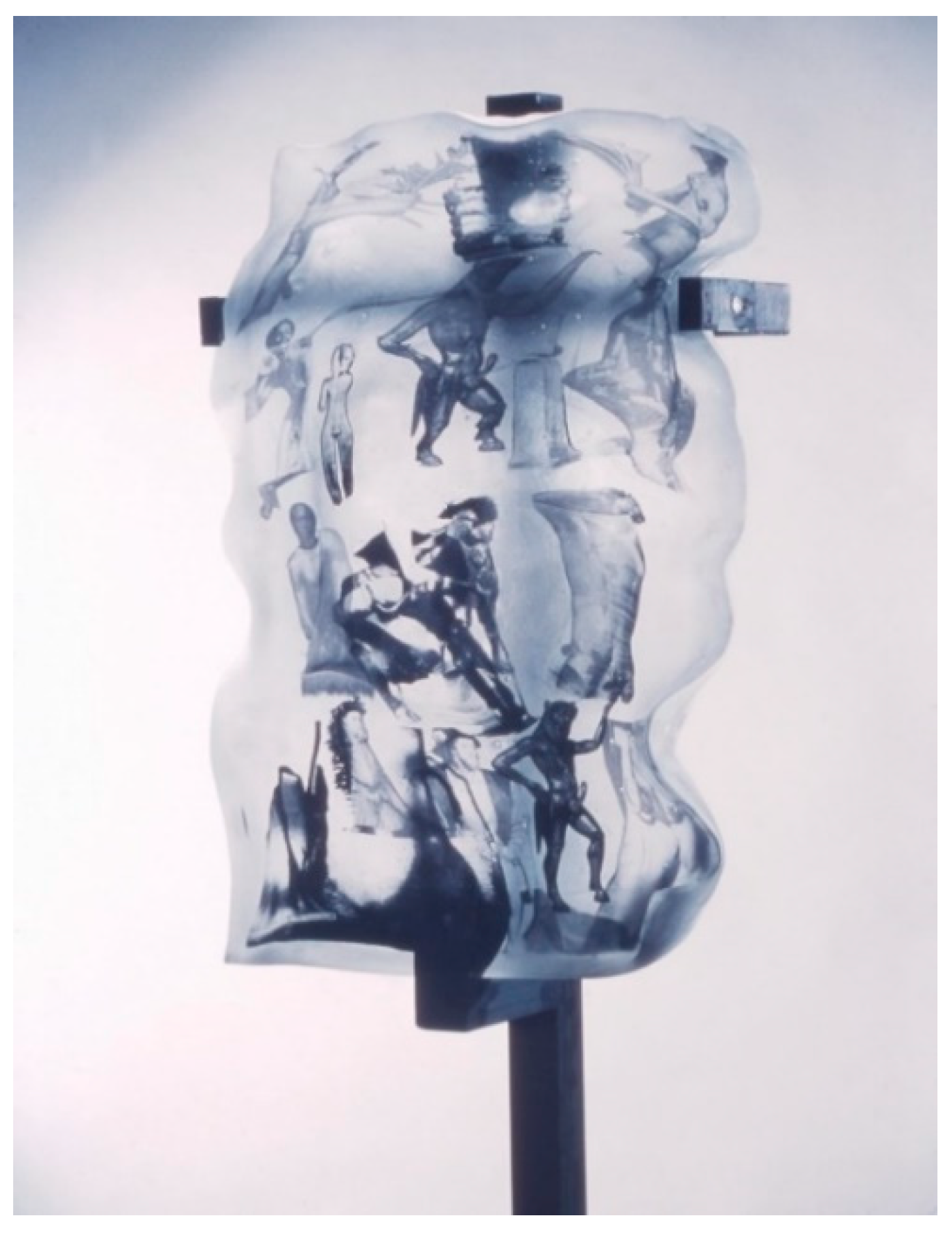 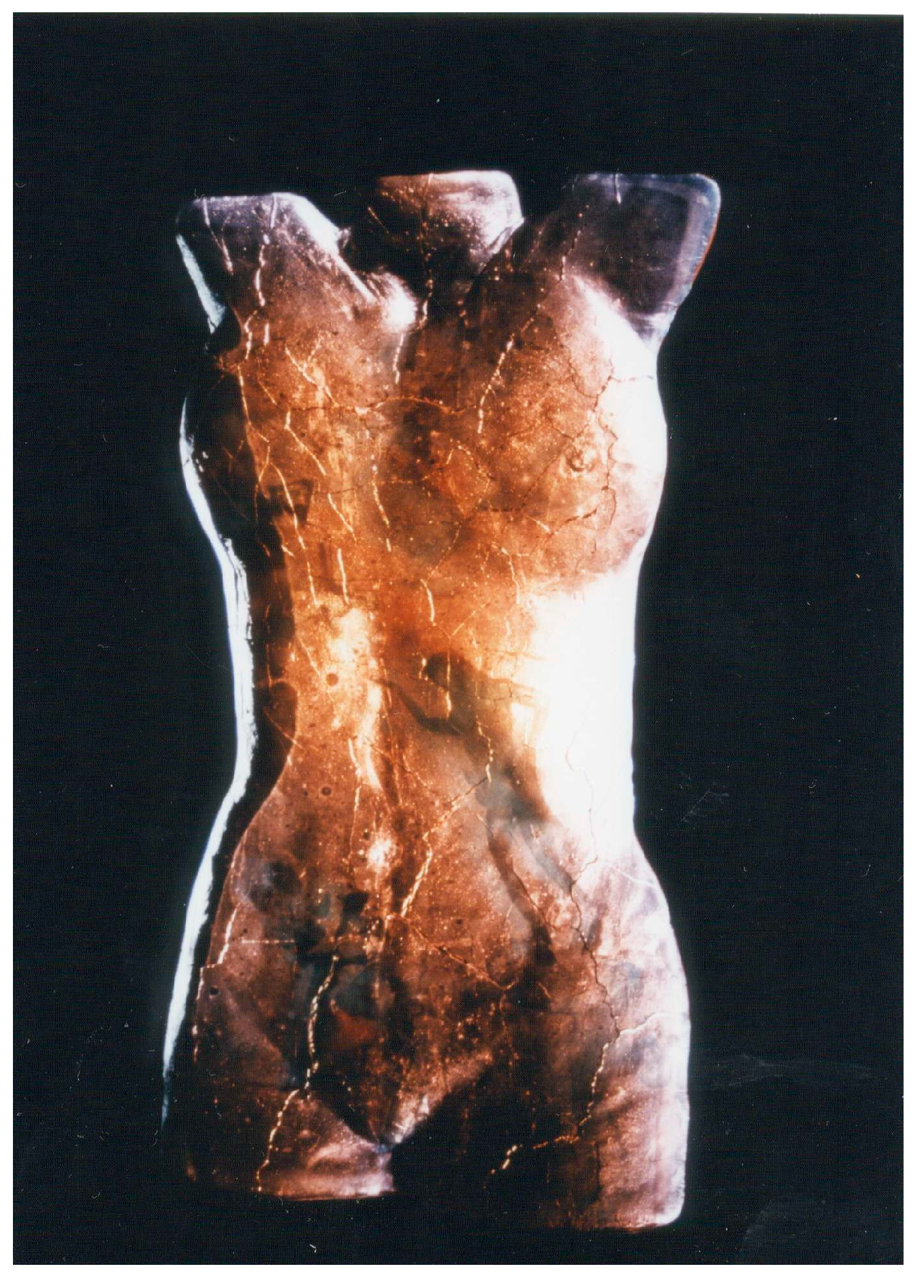 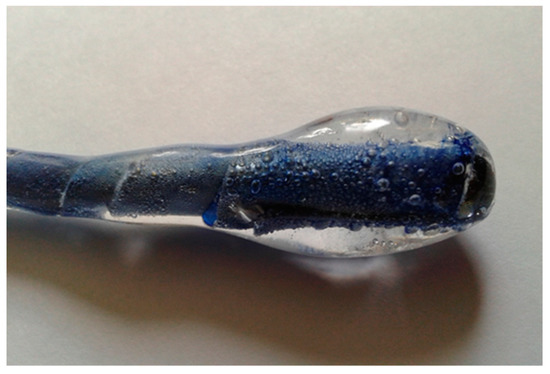 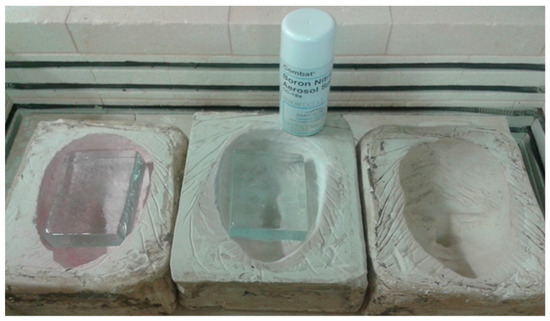 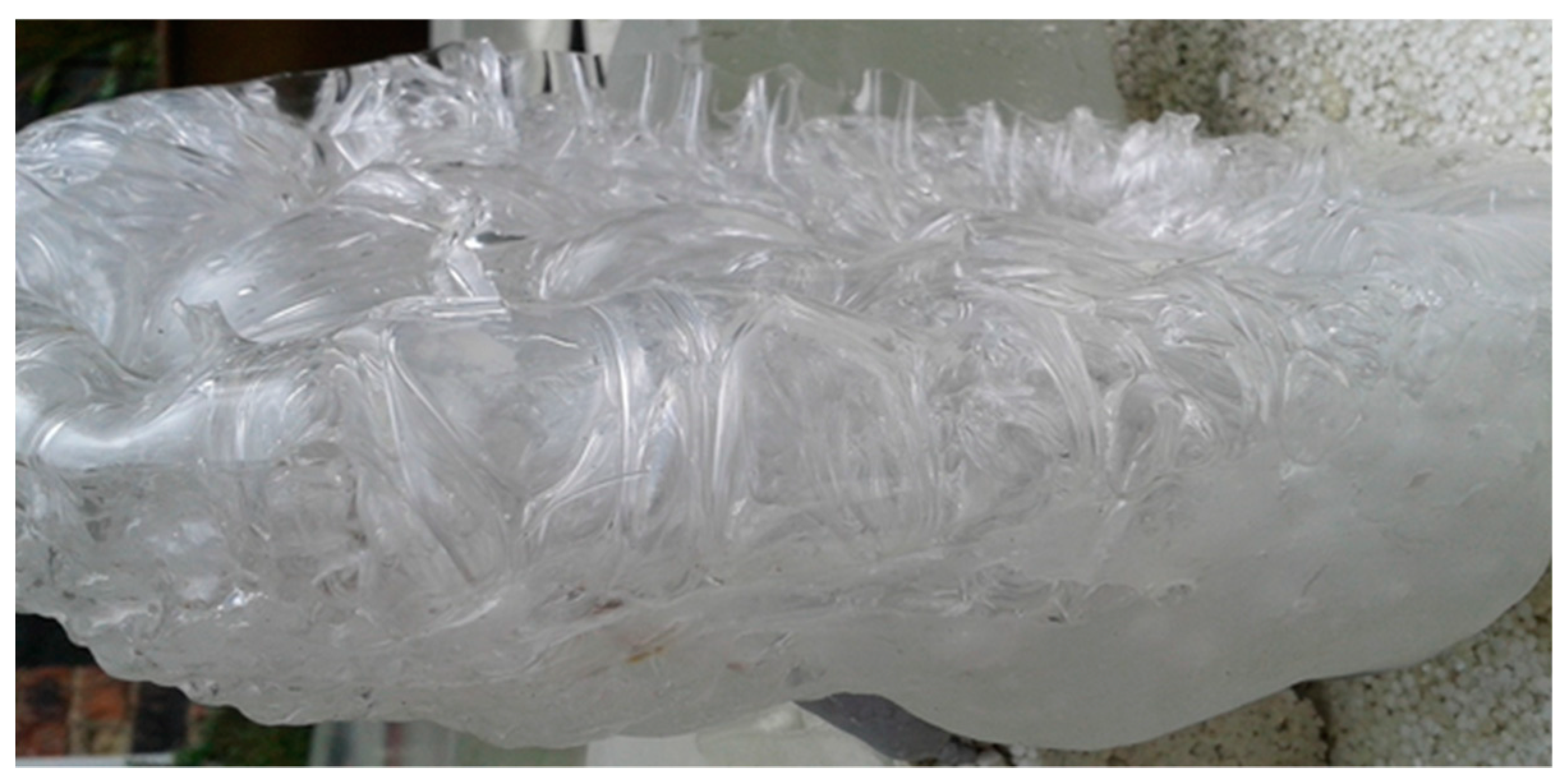