Suitability of Seismic Isolation for Buildings Founded on Soft Soil. Case Study of a RC Building in Shanghai

Base (seismic) isolation is a promising technology for seismic protection of buildings and other constructions. Nowadays, it is accepted that such a technique is efficient and reliable; however, it has two major limitations: soft foundation soil, and tall buildings. The first issue restrains the seismic isolation spreading, given that soft soil is frequent in densely populated areas, and usually such a soil type concentrates the highest seismicity levels. This paper aims to contribute to demonstrating that base isolation, if properly implemented, can be suitable for soft soil. A representative case study is analyzed: a 6-story reinforced concrete (RC) building with base isolation that has recently been built in Shanghai. Since the building is founded on soft soil, concern regarding base isolation suitability arose; even the Chinese design code does not recommend this solution for soft soil. To clarify this issue, non-linear time-history analyses are carried out for a number of natural and artificial seismic inputs that represent the site seismicity; the superstructure behavior is linear, while nonlinearities are concentrated in the isolation layer. The adequacy of base isolation is assessed in the superstructure (in terms of reduction of interstory drift, absolute acceleration and shear force) and in the isolation layer (in terms of axial force, torsion angle and shear strain). The relevance of soil–structure interaction is discussed. The behavior when the mechanical parameters of the isolation units have experienced important changes is also analyzed. The major conclusion is that base isolation of ordinary mid-height RC buildings founded on soft soil can perform satisfactorily in medium seismicity regions. View Full-Text
Keywords: RC building; base isolation; seismic isolation; rubber bearing; soft soil; nonlinear dynamic analysis RC building; base isolation; seismic isolation; rubber bearing; soft soil; nonlinear dynamic analysis
►▼ Show Figures 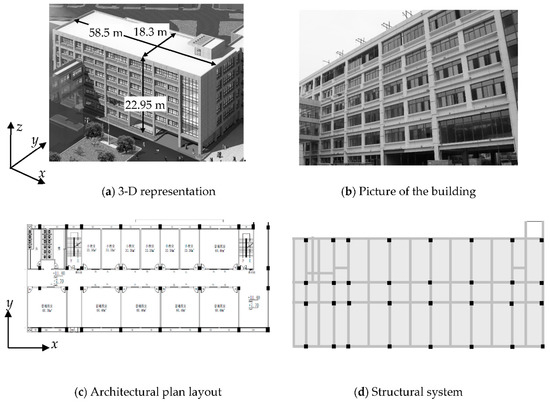