The effect of quench polish quench (QPQ) nitriding temperature on the microstructure and wear resistance of SAF2906 duplex stainless steel was investigated. Results showed the surface of the nitrided samples was composed of an oxidized layer, a loose compound layer, a compact compound layer, and a diffusion layer. The oxidized layer was composed of Fe3O4. The main phases of the loose compound layer were CrN, αN, Fe2–3N, and Fe3O4. The compact compound layer was composed of CrN, αN, and Fe2–3N. In the diffusion layer, CrN and expanded austenite (S) were the main phases. The nitrided layer thickness increased from 20 to 41 μm with an increasing temperature of 570 to 610 °C. When the nitriding temperature was above 590 °C, the precipitates in the diffusion layer became coarsened, and their morphologies gradually changed from spherical particulate to rod-like and flocculent-like. Tribotests showed the cumulative mass loss of QPQ-treated samples was much lower than that of the substrate. The cumulative mass loss of the samples nitrided at 610 °C was higher than that at 570 °C during the first 29 h. When the test time was over 29 h, the former was lower than the latter. View Full-Text
Keywords: SAF2906 duplex stainless steel; nitriding temperature; microstructure; wear resistance SAF2906 duplex stainless steel; nitriding temperature; microstructure; wear resistance
►▼ Show Figures 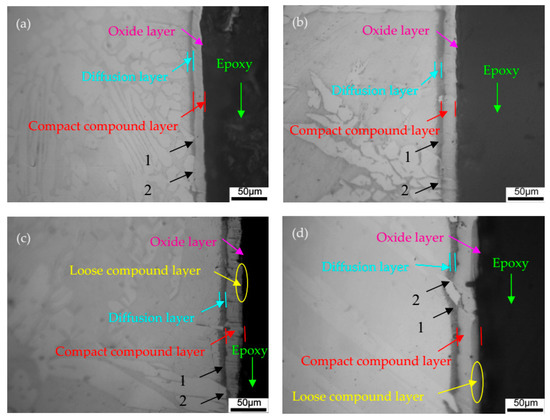