The micro ablation characteristics of steel inflicted by the lightning currents and the influence of anti-corrosion coating on these characteristics are seldom investigated, even though fundamental to applications of steel. In this work, ablation tests on uncoated and coated mild steel plates were conducted with the 2 ms rectangular current simulating the component B of lightning currents. The macro-morphology, microstructure, and Vickers hardness of ablation zones were investigated systematically. The ablation characteristics and mechanisms of coated and uncoated steel were analyzed comparatively. It was found that the energy density of the 2 kA 2 ms rectangular current arc exceeded 106 W/cm2 causing the steel near the arc root melted within 2 ms and ablation formed. The width-depth-ratio of the ablated zone was 43.7 for uncoated plate, and only 7.5 for coated plate, since coating constricted the splashing effect of steel melt occurring on uncoated plate and confined the arc root. The metallographic microstructure and EBSD results showed the ablated zones of uncoated and coated steel both consisted of quenched martensite mixed with a handful of ferrite. There were fined equiaxed grains both in the fusion zone (FZ) and heat affected zone (HAZ) of uncoated plates whereas coarser columnar grains and fined equiaxed grains in the FZ and HAZ of coated plates, respectively. In the HAZ of uncoated plate, the average Vickers hardness of steel increased by 113%, while, in the HAZ and FZ of the coated plate, it increased by 209% and 136%, respectively. View Full-Text
Keywords: ablation; mild steel; lightning current; anti-corrosion coating; microstructure; EBSD; Vickers hardness ablation; mild steel; lightning current; anti-corrosion coating; microstructure; EBSD; Vickers hardness
►▼ Show Figures 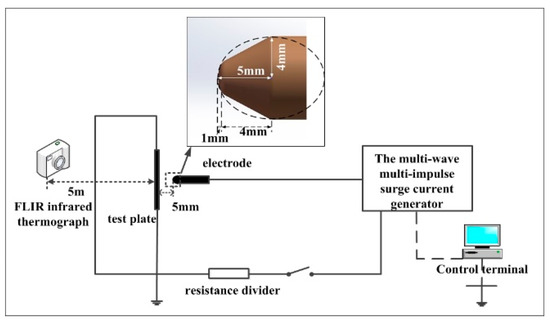