The aim of this work was to correlate the overall carbon content in NbC-Ni, NbC-Ni-VC and NbC-Ni-Mo starting powders with the resulting microstructure, hardness, and fracture toughness of Ni-bonded NbC cermets. A series of NbC-Ni, NbC-Ni-VC and NbC-Ni-Mo cermets with different carbon content were prepared by conventional liquid phase sintering for 1 h at 1420 °C in vacuum. Microstructural analysis of the fully densified cermets was performed by electron probe microanalysis (EPMA) to assess the effect of carbon and VC or Mo additions on the NbC grain growth and morphology. A decreased carbon content in the starting powder mixtures resulted in increased dissolution of Nb, V, and Mo in the Ni binder and a decreased C/Nb ratio in the NbC based carbide phase. The Vickers hardness (HV30) and Palmqvist indentation toughness were found to decrease significantly with an increasing carbon content in the Mo-free cermets, whereas an antagonistic correlation between hardness and toughness was obtained as a function of the Mo-content in Mo-modified NbC cermets. To obtain optimized mechanical properties, methods to control the total carbon content of NbC-Ni mixtures were proposed and the prepared cermets were investigated in detail. View Full-Text
Keywords: niobium carbide; cermet; hardmetal; liquid phase sintering; carbon; hardness niobium carbide; cermet; hardmetal; liquid phase sintering; carbon; hardness
►▼ Show Figures 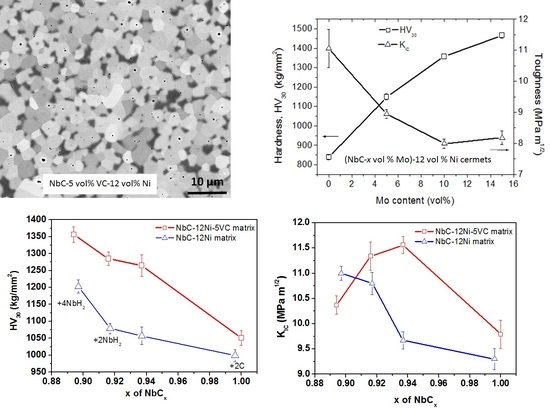