Serration phenomena, in which stress fluctuates in a saw-tooth shape, occur when a uniaxial test is performed on an aluminum alloy containing a solid solution of solute atoms. The appearance of the serrations is affected by the strain rate and temperature. Indentation tests enable the evaluation of a wide range of strain rates in a single test and are a convenient test method for evaluating serration phenomena. Previously, the serrations caused by indentation at room temperature were clarified using strain rate as an index. In this study, we considered ambient temperature as another possible influential factor. We clarify, through experimentation, the effect of temperature on the serration phenomenon caused by indentation. An Al–Zn–Mg–Cu alloy (7075 aluminum alloy) was used as the specimen. The aging phenomenon was controlled by varying the testing temperature of the solution-treated specimen. Furthermore, the material properties obtained by indentation were evaluated. By varying the testing temperature, the presence and amount of precipitation were controlled and the number of solute atoms was varied. Additionally, the diffusion of solute atoms was controlled by maintaining the displacement during indentations, and a favorable environment for the occurrence of serrations was induced. The obtained results reveal that the variations in the serrations formed in the loading curvature obtained via indentation are attributed to the extent of interaction between the solute atoms and the dislocations. View Full-Text
Keywords: indentation; serration; temperature; strain rate; dislocation; artificial aging; solid solution; loading curvature; aluminum alloy indentation; serration; temperature; strain rate; dislocation; artificial aging; solid solution; loading curvature; aluminum alloy
►▼ Show Figures 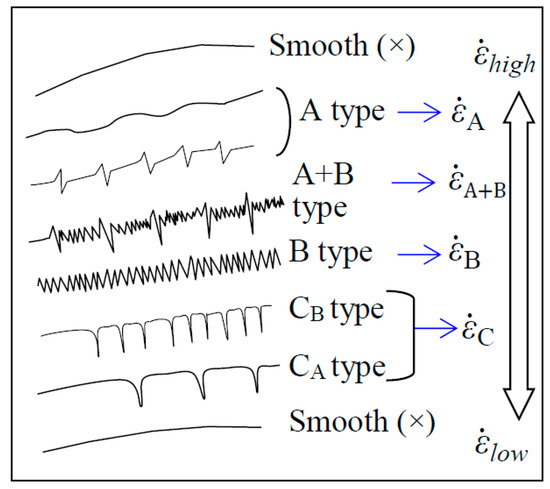 
Yamada, Hiroyuki; Kami, Tsuyoshi; Ogasawara, Nagahisa. 2020. "Effects of Testing Temperature on the Serration Behavior of an Al–Zn–Mg–Cu Alloy with Natural and Artificial Aging in Sharp Indentation." Metals 10, no. 5: 597.