From the micro-powder injection molding (μPIM) process, a two-component micro-powder injection molding (2C-μPIM) process has evolved due to the growing demand for multi-functional micro-components in avant-garde applications. 2C-μPIM technology provides the opportunity to conjugate distinct materials within one part. Stainless steel (SS 17-4PH) and 3 mol.% yttria-stabilized zirconia (3YSZ) are characteristically recognized for their corrosion resistance and high hardness. In this work, the obtained critical powder volume concentration (CPVC) of SS 17-4PH and 3YSZ powders were 71.7 and 47.1 vol.%, respectively. Solid loadings of 2 and 3 vol.% less than the CPVC were considered as the optimal content for both powders. Feedstocks were obtained by mixing SS 17-4PH and 3YSZ powders with a binder system comprised of palm stearin (PS) and low-density polyethylene (LDPE). The rheological behaviors of the prepared feedstocks were assessed to figure out the feedstocks having the best rheological properties. The feedstocks of SS 17-4PH and 3YSZ with powder loadings of 69 and 44 vol.% were eventually injected to produce bi-material micro-parts. The optimal solvent debinding temperature of the green bi-material micro-part was then investigated, and it was found that 73.3% soluble binder was removed when bi-material was immersed in acetone at 70 °C for 40 min. View Full-Text
Keywords: powder injection molding; bi-material micro-part; feedstock; rheological properties; debinding powder injection molding; bi-material micro-part; feedstock; rheological properties; debinding
►▼ Show Figures 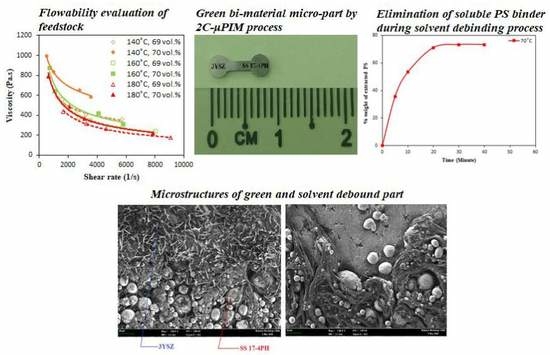