Porous Copper (Cu) was brazed to Cu plates using Cu-9.7Sn-5.7Ni-7P amorphous filler metal. The effects of brazing parameters on the porous Cu and brazed joints were investigated. The furnace brazing temperatures employed were 660 °C and 680 °C, and the holding times were 10 and 15 min. After brazing, the microstructure was analyzed using Scanning Electron Microscope (SEM) equipped with Electron Dispersive X-ray Spectroscope (EDS). SEM results showed that the thickness of the brazed seam at the base joint decreased with increasing temperature and time. At low brazing temperature, microvoids and cracks were observed at the joint interface. The microvoids and cracks disappeared in the sample brazed at 680 °C for 15 min, and higher diffusion of the filler was noted in the overall bonded region. The formation of Cu-P, Cu-Ni, and Ni-Sn phases at the joint interface was validated using X-ray diffraction. The phases formed increased the hardness of the brazed joints and porous Copper. It was observed that the rigidity of porous Copper tends to increase due to surface hardening effects. The rigidity of porous Cu after brazing is important in ensuring minimal deformation during cooling device servicing, which is an integral feature of prospect product development. View Full-Text
Keywords: brazing; porous Copper; Copper foam; microstructure; amorphous brazing; porous Copper; Copper foam; microstructure; amorphous
►▼ Show Figures 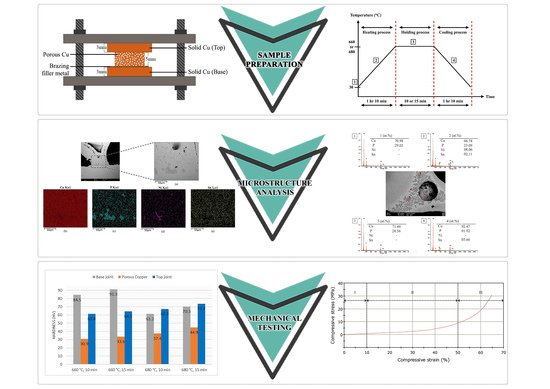