This paper presents an outline of the quest for the mechanical steady state that an unlimited unidirectional plastic strain applied at low to moderate temperature is presumed to develop in single-phase crystalline materials deforming by dislocation glide, with particular emphasis on its athermal strength limit. Fifty years ago, the study of crystalline plasticity was focused on the strain range covered by tensile tests, i.e., on true strains less than unity; the canonic stress–strain behavior was the succession of stages I, II, and III, the latter supposedly leading to a steady state defining a temperature and strain rate-dependent flow stress limit. The experimentally available strain range was increased up to Von Mises equivalent strains as high as 10 by the extensive use of torsion tests or by combinations of intermittent deformations by wire drawing or rolling with tensile tests during the 1970s. The assumed exhaustion of the strain-hardening rate was not verified; new deformation stages, IV and V, were proposed, and the predicted strength limit for deformed materials was nearly doubled. Since the advent of severe plastic deformation techniques in the 1980s, such a range was still significantly augmented. Strains of the order of several hundreds were routinely reached, but former conclusions relative to the limit of the flow stress were not substantially changed. However, very recently, the plastic strain range has allegedly been expanded to 105 true strain units by using torsion under high pressure (HPT), surprisingly for some common metals, without experimental confirmation of having reached any steady state. This overview has been motivated by the scientific and technological interest of such an open-ended story. A tentative explanation for the newly proposed ultra-severe hardening deformation stage is given. View Full-Text
Keywords: plastic deformation; strain hardening; deformation stages; dynamic steady state; crystalline materials; dislocation density limit plastic deformation; strain hardening; deformation stages; dynamic steady state; crystalline materials; dislocation density limit
►▼ Show Figures 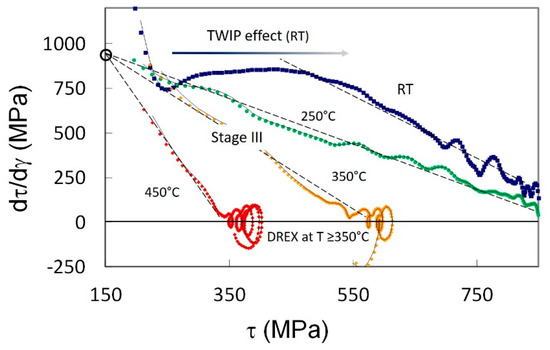