Is the Right to Access to the Services and Supports Ensured for the Deaf and Hard-of-Hearing Children? An Ethnographic Study Based on the Experience of Hearing Parents
Next Article in Special Issue

The Remains of the Socialist Legacy: The Influence of Socialist Socialization on Attitudes toward Income Inequality
Previous Article in Journal

Sociology’s Role in the Teaching of Organizational Behavior in Higher Education. The Case of Hospitality Management
Previous Article in Special Issue

The Impact of the Great Recession on Perceived Immigrant Threat: A Cross-National Study of 22 Countries 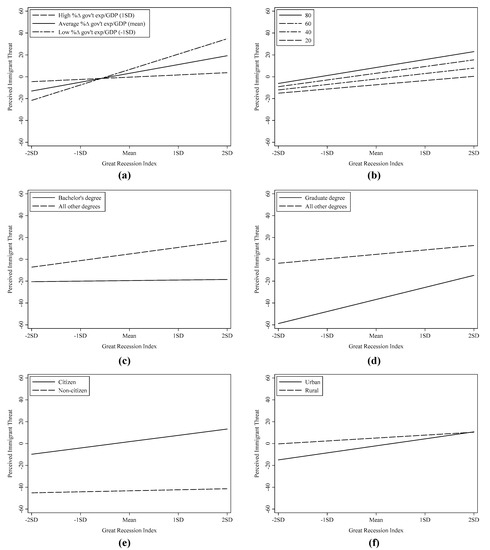 Kwak, J.; Wallace, M. The Impact of the Great Recession on Perceived Immigrant Threat: A Cross-National Study of 22 Countries. Societies 2018, 8, 52.


Kwak J, Wallace M. The Impact of the Great Recession on Perceived Immigrant Threat: A Cross-National Study of 22 Countries. Societies. 2018; 8(3):52.


Kwak, Joonghyun; Wallace, Michael. 2018. "The Impact of the Great Recession on Perceived Immigrant Threat: A Cross-National Study of 22 Countries." Societies 8, no. 3: 52.