Oxidation damages cells and muscles, and thus, causes injuries and fatigue, which negatively affect the conditioning of athletes. Thus, in this study, we aimed to investigate the effects of high-antioxidant fruits (kiwifruit) intake on oxidative stress level (d-ROMs) and antioxidant activity (BAP) in male middle- and long-distance runners routinely exposed to oxidative stress. This study was performed from May to July 2017 (Study 1) and October to December 2018 (Study 2). The subjects in Study 1 were 30 male runners, of which 15 consumed two yellow kiwifruits (Zespri® SunGold Kiwifruit) per day for one month of the survey period (Intake group). The subjects of Study 2 were 20 male runners who had high d-ROMs from preliminary testing. These runners consumed two yellow kiwifruits (Zespri® SunGold Kiwifruit) per day for two months. d-ROMs and BAP were measured using a free radical analyzer. In study 1, the d-ROMs decreased while the potential antioxidant capacity (BAP/d-ROMs ratio) increased in the Intake group. In study 2, BAP/d-ROMs ratio was higher after one and two months compared to that at pre-intervention. Study findings suggested that consumption of kiwifruits may reduce oxidative stress levels and increase antioxidant activity, resulting in improved potential antioxidant capacity. View Full-Text
Keywords: athletes; fruit; antioxidant activity; d-ROMs; BAP athletes; fruit; antioxidant activity; d-ROMs; BAP
►▼ Show Figures 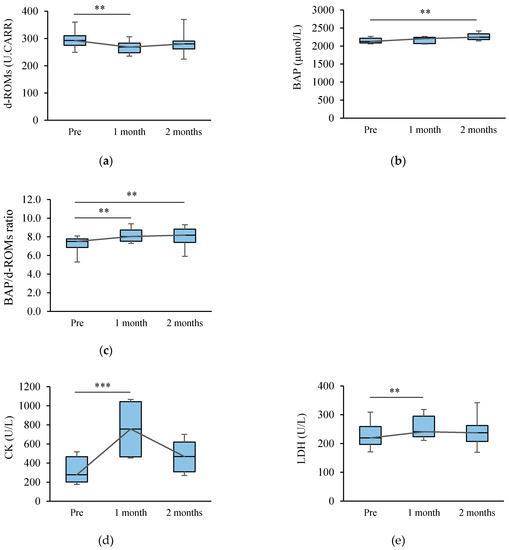