Investigation of the Exercise Dependence of Athletes Doing Kickboxing, Taekwondo, and Muay Thai

Brazilian Jiu-Jitsu (BJJ) is a rapidly growing grappling sport with a wide spectrum of participants. This cross-sectional study examined the lifetime prevalence of concussion in adult BJJ practitioners in the United States using a 17-item survey. A total of 778 (11.4% female) BJJ practitioners with a median age of 31 years completed the survey. Overall, the lifetime prevalence of the self-reported BJJ-related concussion was 25.2%. However, the prevalence was higher among females than males (43.0% versus 22.9%; X2(1,740) = 15.129; p < 0.001). Factors independently associated with significantly increased odds of having sustained a BJJ-related concussion included a prior history of concussion (OR 1.76, 95% CI 1.14–2.74; p = 0.011) and female gender (OR 1.95, 95% CI 1.04–3.65; p = 0.037). The median return to sports time was three days, with 30.3% of participants returning on the same day as being concussed. The present study represents the first epidemiological research examining the concussions in BJJ. The results underscore the need for increased education on concussions and return to sports guidelines among BJJ coaches and practitioners.
Keywords: Brazilian Jiu-Jitsu; BJJ; concussion; sport-related concussion; martial arts Brazilian Jiu-Jitsu; BJJ; concussion; sport-related concussion; martial arts

Brazilian Jiu-Jitsu (BJJ) is a rapidly growing grappling sport with a wide spectrum of participants. In contrast to combat sports, BJJ focuses on submissions such as joint locks, chokeholds, and control rather than punches and kicks. The goal is to control and submit the opponent as opposed to striking and inducing trauma. This lack of purposeful trauma distinguishes BJJ from combat sports such as boxing and mixed martial arts.
Like other contact grappling sports, there is a risk for concussion. According to the most recent international consensus statement on concussion in sports, a sports-related concussion was defined as “a traumatic brain injury induced by biomechanical forces” [1]. Sports-related concussion is typically a brief self-resolving impairment in neurologic function. The derangement tends to be functional rather than structural in nature, and therefore is not often seen with neuroimaging studies. The symptoms of a sports-related concussion are broad and varied and do not have to include loss of consciousness (LOC) [1]. Return to sports and time to recovery from symptoms are also commonly studied among concussed athletes. Athletes with concussions who report more than four symptoms are at an increased risk for symptoms lasting greater than one week [2].
There has been limited research of injuries acquired from participation in BJJ. Within the current body of published research, the focus has been on orthopedic injuries and skin infections [3,4,5]. It has been observed that these injuries occur more often during practice than competitions [5]. Previous research has shown the average BJJ practitioner competes in 2.18 competitions per year and trains 7.63 h per week [5]. The paucity of competitions relative to practice time is likely a factor in the majority of injuries occurring during practice. The current body of published literature does not include studies that examine the prevalence of concussions among BJJ participants. Exploring the epidemiology of concussion in BJJ may help determine the best strategies for identification, treatment, and prevention of concussions within this sport.
Epidemiological studies on the period prevalence of concussions have been carried out in similar grappling sports such as wrestling. In the National Collegiate Athletic Association (NCAA) wrestling from 2005 to 2006, concussions represented 5.8% of all injuries or 0.42 concussions per 1000 athlete exposures [6]. During 2011–2015, the concussion rate in NCAA wrestling was reported to be 0.89 per 1000 athlete-exposures [7]. Data from the NCAA Injury Surveillance System reveal a steady increase in concussion rates across all sports, effectively doubling from 1988 to 2004 [8]. This increase is most likely to be due to the increasing awareness and reporting; it is, therefore, difficult to compare concussion prevalence estimates over this time period.
A recent study using retrospective self-reporting found the lifetime prevalence of concussion in water polo to be 36% [9]. The NCAA has carried out similar retrospective self-reporting studies. Among men’s contact sports, the concussion prevalence were 17.8% and 19.5% in lacrosse and wrestling, respectively [10]. Among women’s contact sports, which did not include grappling sports, the highest concussion prevalence was in ice hockey at 20.9% [10]. This data set was limited to concussions incurred during an athlete’s NCAA career.
The vast majority of sport-related concussion research focuses on athletes under 30 years of age [8,10,11,12]. With a significant population of BJJ participants older than 30, there is an opportunity to analyze concussions in a population that are studied less frequently [4]. It has been shown that musculoskeletal injuries in BJJ occur more frequently in practitioners over age 30, although there has been no research published on brain injuries in this age group [13]. Outside of BJJ, there is evidence that females are more likely to suffer concussions in a given sport than their male counterparts [12]. To our knowledge, this phenomenon has yet to be studied within BJJ.
The present study aimed to quantify the lifetime prevalence of concussions among BJJ practitioners to identify factors associated with greater odds of having a concussion. We hypothesize that the lifetime prevalence of concussions will be similar to other grappling sports. We also expect the practitioners who participate in competitions and those who are older to have a greater prevalence of concussions and take longer to return to sports.

A web link to the survey was directly emailed to 42 BJJ coaches or school owners and directly posted on the social media websites of approximately 75 BJJ clubs and state groups located in the United States. Email contacts for school owners based in the United States were collected alphabetically by club name from the International Brazilian Jiu-Jitsu federation website [14]. The social media distribution focused on state-based BJJ Facebook groups. For example, the survey was posted publicly to the “Utah Jiu-Jitsu” Facebook page and members were invited to respond. This was repeated for each state’s BJJ page, with the majority of states having such a forum. Some states had more than one page, and the survey was posted on all identified pages in such instances. Any practitioner over the age of 18 was invited to complete the survey. The number of people receiving the invitation to complete the survey was unknown and the response rate is, therefore, indeterminable. The survey was disseminated via a link to the SurveyMonkey collection platform, set to prevent multiple responses from the same IP address to avoid repeat responses. 791 practitioners sent back completed or partially completed surveys; 13 surveys were excluded because the practitioners identified themselves as under the age of 18.

The survey consisted of 17 questions, beginning with demographic data and previous concussion information. Three participants known to the author completed the questionnaire and provided feedback on any ambiguity; changes were made for clarification prior to distribution. Responses from these three participants to the revised survey were included in the data set. Reliability and Validity of the survey were not formally tested. We asked for the respondents’ age, gender, number of previous concussions, and number of times being “knocked out or unconscious from a concussion.” The next section included questions about the respondents’ involvement in BJJ: length of time spent training, the number of practices attended per week, and the total number of lifetime competitions.
The third section of the survey asked whether each practitioner had experienced one or more concussions as a result of participating in BJJ. Within the survey, participants were given a broad definition of a concussion as “a blow to the head or body followed by a variety of symptoms that may include any of the following: a headache, dizziness, loss of balance, blurred vision, ‘seeing stars,’ feeling in a fog or slowed down, memory problems, poor concentration, irritability, emotional outbursts, slurred speech, disturbed sleep pattern, nausea, or throwing up.” The survey explicitly stated that getting “knocked-out” or being unconscious does not always occur with a concussion. If the respondent reported having experienced a concussion, they were asked to identify which of the previously listed symptoms they had experienced. They were then asked how long after the concussion they returned to BJJ practices, how long they were asymptomatic before returning to BJJ, and whether they experienced a second BJJ-associated concussion at a later date. The full survey is available in the Supplementary Materials.

Statistical analysis was performed using the IBM developed Statistical Package for the Social Sciences (SPSS) (Armonk, NY, USA). Potential factors associated with report/non-report of a concussion were tested using separate Chi-Square (X2) tests for categorical variables and Student t-tests for continuous variables. Variables with associated p-values of less than or equal to 0.10 were included in multiple logistic regression analysis to identify those independently associated with a reported concussion. Variables were entered simultaneously into the regression model. Multicollinearity of variables in the equation was evaluated by examining Variance Inflation Factors (VIF) derived from sequential multiple linear regression analysis in which each variable was regressed on all others. A p-value of less than 0.05 was the marker for significance. Competition density was calculated for each respondent by dividing the number of reported lifetime BJJ competitions by the number of months training. Descriptive statistics will include reporting the median with interquartile range (IQR) for non-normally distributed variables.

3.3. Concussions While Engaged in BJJ

A total of 187 (25.2%) practitioners reported a concussion while engaging in BJJ. Females reported significantly more concussions than their male counterparts (43% versus 22.9%; X2 (2, n = 187) = 19.222, p < 0.001). There were no differences in concussion prevalence across age groups (X2 (5, n = 187) = 6.044, p = 0.302). Logistic Regression Analysis (Table 2) indicated that female gender, reporting at least one concussion prior to starting BJJ, total number of competitions, and competition density was independently associated with greater odds of suffering a concussion when participating in the sport. VIF for variables in the equation ranged from 1.009 to 1.21 suggesting an acceptable level of multicollinearity.

We would like to acknowledge to contribution of Michael Slabinski for conceptualization and providing BJJ expertise. 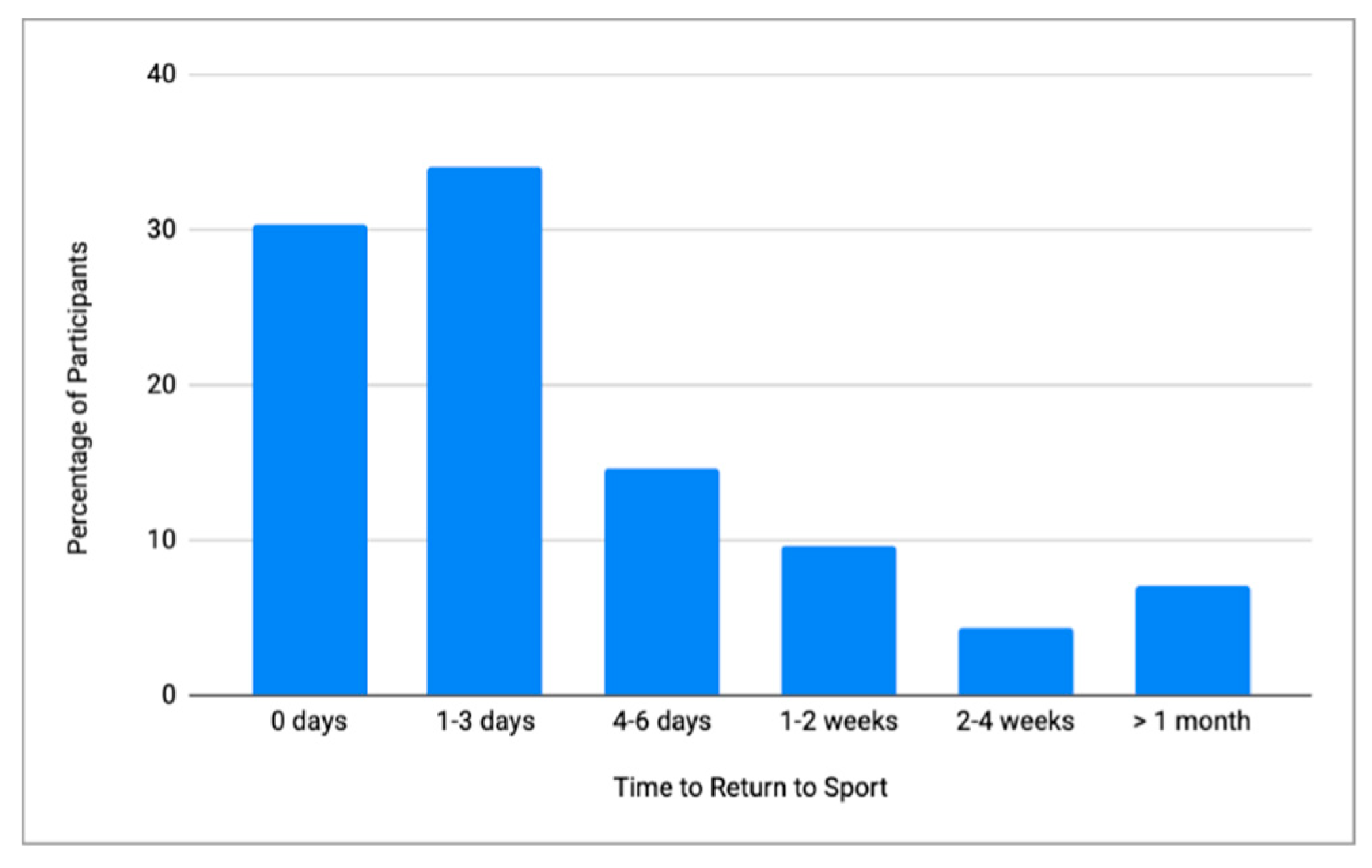