The recent addition of surfing to the Tokyo 2020 Olympic Games has fueled a surge in commercial and research interest in understanding the physiological demands of the sport. However, studies specific to maximal aerobic testing of surfers are scarce. Therefore, the primary aim of this study was to compare two commercially available swim bench (SWB) ergometers in the determination of maximal aerobic capacity in recreational surfers. A secondary aim was to correlate (independent of one another) the two ergometer findings of VO2peak to the time taken to complete a water-based 400-m paddle test. This cross-sectional study consisted of 17 recreational surfers aged between 18–58 years. Participants were randomized to either the SwimFast ergometer or VASA ergometer and tested for maximal aerobic capacity, followed by a 400-m paddle test. There were no significant differences between the two SWB ergometers in the determination of relative VO2peak (mean difference 0.33 mL/kg/min; 95% CI −1.24–1.90; p = 0.66). Correlations between VO2peak obtained from maximal paddling effort on the SwimFast and the VASA and the 400-m paddle test (total time (s)) showed a negative significant correlation r = −0.819, p = 0.024; r = −0.818, p = 0.024, respectively. Results suggest that either ergometer (SwimFast or VASA) can be used to determine peak aerobic capacity within a recreational surfing cohort. The significant correlation of the two SWB ergometers and the 400-m paddle test suggest that the 400-m paddle test may be a suitable field-based method of determining aerobic capability. Collectively, these preliminary findings provide initial evidence for similarities in VO2peak on two commercial ergometers and their correlations with a field-based test. However, further research is needed with a larger sample size and inclusive of competitive surfers to provide robust findings which can be generalized to the surfing population. View Full-Text
Keywords: aerobic power; swimbench; VASA; surfing; SwimFast; Cardiorespiratory fitness; VO2peak aerobic power; swimbench; VASA; surfing; SwimFast; Cardiorespiratory fitness; VO2peak
►▼ Show Figures 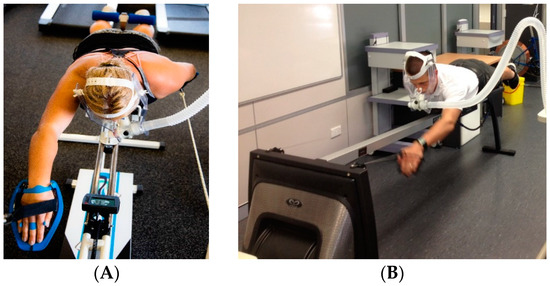