The First Finding of Six Instars of Larvae in Heteroptera and the Negative Correlation between Precipitation and Number of Individuals Collected in Sea Skaters of Halobates (Heteroptera: Gerridae)
Previous Article in Journal

(1) Background: The tomato leafminer Tuta absoluta (Lepidoptera: Gelechiidae) is a key tomato insect pest. At present, it is considered to be a serious threat in various countries in Europe, North Africa, and Middle East. The extensive use and the developed resistance of T. absoluta to spinosad causes some concern, which leads to the need for alternative products. (2) Materials and Methods: Several laboratory experiments were conducted to investigate the ovicidal properties of a zeolite particle film on T. absoluta. The toxicity of three different zeolites and six zeolite formulations to T. absoluta eggs and larvae was determined using different exposure methods. (3) Results: In general, the formulated zeolites yielded higher egg and larvae mortality values, especially when the zeolite particle film was residually applied. Notable differences in mortality rates from exposure to zeolites compared to other products, such as kaolin, its formulated product Surround, and the insecticide spinosad, were observed. Kaolin and Surround exhibited little or no effect for both application methods, while the hatch rate was reduced by 95% when spinosad was applied topically. Spinosad yielded egg and larvae mortality rates of 100% for both application methods. Additionally, increased oviposition activity was observed in adults exposed to the wettable powder (WP) formulations. These WP formulations increased egg deposition, while Surround and spinosad elicited a negative oviposition response. (4) Conclusions: It can be derived that the tested products, zeolites BEA (Beta polymorph A), FAU (Faujasite), LTA (Linde type A), and their formulations, had no real insecticidal activity against the eggs of T. absoluta. Nevertheless, egg exposure to zeolites seemed to affect the development process by weakening the first instar larvae and increasing their mortality. Subsequently, based on the choice test, no significant difference was observed between the number of eggs laid on the treated leaves and control leaves. View Full-Text
Keywords: topical; residual; oviposition; zeolites; tomato leafminer topical; residual; oviposition; zeolites; tomato leafminer
►▼ Show Figures 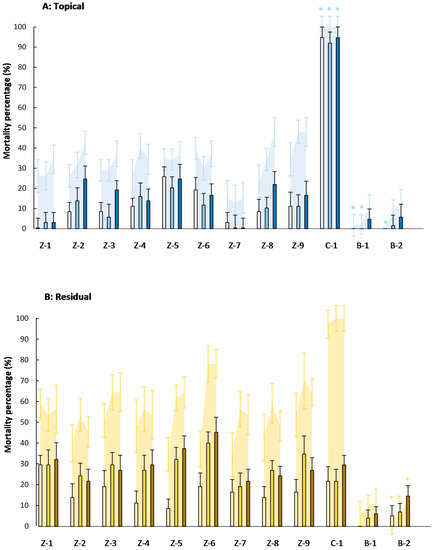