The Asian citrus psyllid, Diaphorina citri Kuwayama, is the insect vector of the pathogen causing huanglongbing. We selected three botanical oils to evaluate behavioral activity against D. citri. In laboratory olfactometer assays, fir oil was repellent to D. citri females, while litsea and citronella oils elicited no response from D. citri females. In choice settling experiments, D. citri settled almost completely on control plants rather than on plants treated with fir oil at a 9.5 mg/day release rate. Therefore, we conducted field trials to determine if fir oil reduced D. citri densities in citrus groves. We found no repellency of D. citri from sweet orange resets that were treated with fir oil dispensers releasing 10.4 g/day/tree as compared with control plots. However, we found a two-week decrease in populations of D. citri as compared with controls when the deployment rate of these dispensers was doubled. Our results suggest that treatment of citrus with fir oil may have limited activity as a stand-alone management tool for D. citri and would require integration with other management practices. View Full-Text
Keywords: citrus greening disease; essential oil; repellent; push-pull; integrated pest management citrus greening disease; essential oil; repellent; push-pull; integrated pest management
►▼ Show Figures 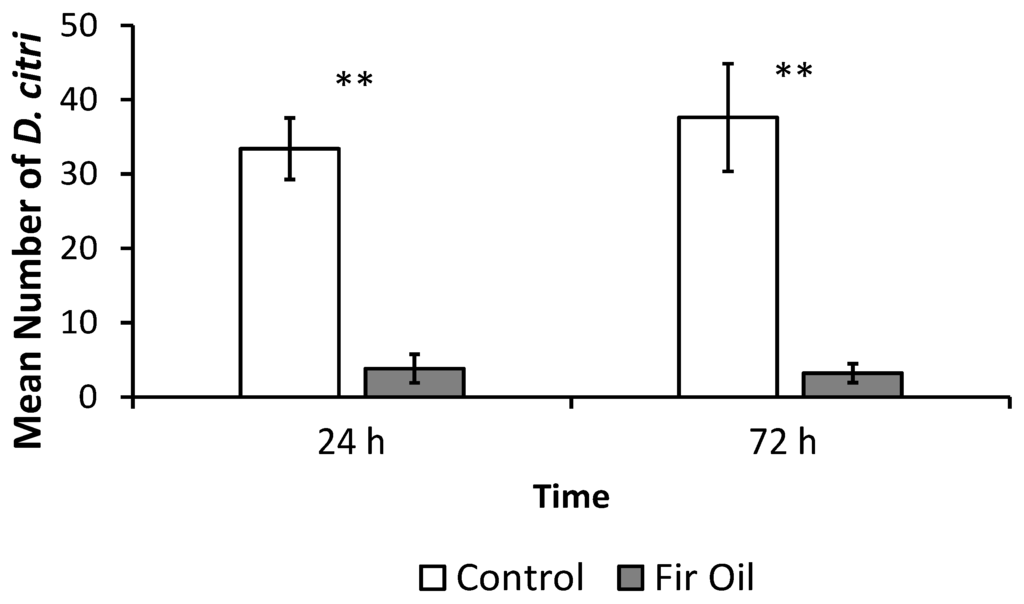