Enhanced Control of the Fungus Gnat Bradysia odoriphaga (Diptera: Sciaridae) by Co-Application of Clothianidin and Hexaflumuron

Worldwide, mass losses of honey bee colonies are being observed more frequently. Poor nutrition may cause honey bees to be more susceptible to pesticides and more vulnerable to diseases, and as a direct result of this, honey bee colonies can collapse. Another cause of mass bee colony collapse that is no less important is the use of pesticides. The level of toxicity of most pesticides is greatly affected by nutrient uptake. In addition, the honey bee genome is known to be specific for a significantly lower number of genes associated with detoxification compared with other insect species. Intake of phenolic and flavonoid substances in food can lead to increased expression of genes encoding detoxification enzymes in bees. Therefore, in this study, we evaluated in vitro the effect of phenolic and flavonoid substances on bee mortality and food consumption in the case of intoxication by pesticide thiacloprid. The results of this study showed a significant positive effect on honey bee survival rate as well as increased food intake. In addition, the expression level of genes encoding detoxification enzymes was determined.

Malnutrition is one of the main problems related to the global mass collapse of honey bee colonies, because in honey bees, malnutrition is associated with deterioration of the immune system and increased pesticide susceptibility. Another important cause of mass bee colonies losses is the use of pesticides. Therefore, the goal of this study was to verify the influence of polyphenols on longevity, food consumption, and cytochrome P450 gene expression in worker bees intoxicated by thiacloprid. The tests were carried out in vitro under artificial conditions (caged bees). A conclusively lower mortality rate and, in parallel, a higher average food intake, were observed in intoxicated bees treated using a mixture of phenolic acids and flavonoids compared to untreated intoxicated bees. This was probably caused by increased detoxification capacity caused by increased expression level of genes encoding the cytochrome P450 enzyme in the bees. Therefore, the addition of polyphenols into bee nutrition is probably able to positively affect the detoxification capacity of bees, which is often reduced by the impact of malnutrition resulting from degradation of the environment and common beekeeping management. View Full-Text
Keywords: cage experiments; cytochrome P450; detoxification; food intake; mortality rate cage experiments; cytochrome P450; detoxification; food intake; mortality rate
►▼ Show Figures 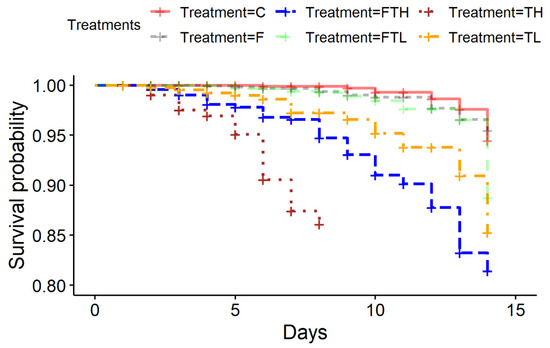