Morphology of the Novel Basimandibular Gland in the Ant Genus Strumigenys (Hymenoptera, Formicidae)
Next Article in Special Issue

Field Screen and Genotyping of Phaseolus vulgaris against Two Begomoviruses in Georgia, USA

Snap bean (Phaseolus vulgaris) production and quality have been negatively impacted by two whitefly-transmitted begomoviruses: cucurbit leaf crumple virus (CuLCrV) and sida golden mosaic Florida virus (SiGMFV), which often appear as a mixed infection in Georgia. However, there is no information available in terms of resistance to these two viruses in commercial cultivars/genotypes. Hence, commercially available snap bean varieties/genotypes (n = 84 in 2018; n = 80 in 2019; most of the genotypes were common in both years (with a few exceptions) were screened in two field seasons of 2018 and 2019. We also included two commonly grown Lima bean (Phaseolus lunatus) varieties in our field screening. As a result of this screening, we identified twenty Phaseolus genotypes with high-to-moderate levels of resistance and twenty-one genotypes with high levels of susceptibility. While there were differences among the Phaseolus spp. in severity of viral symptoms, suggesting differential susceptibility to viruses (CuLCrV and SiGMFV) and potential field resistance, the resistance mechanism is yet to be characterized. However, based on the greenhouse evaluation with two genotypes-each (susceptible vs. resistant) exposed to viruliferous whiteflies infected with CuLCrV and SiGMFV, we observed that the susceptible genotypes accumulated higher copy numbers of both viruses and displayed severe crumple severity compared to the resistant genotypes, indicating that resistant might potentially be against the virus complex than against the whiteflies. Adult whitefly counts differed among the Phaseolus spp. in both the years, indicating variability in host preference. We further sequenced 82 genotypes (80 snap bean and two Lima bean) to unravel the variations within the genomes. Genome sequencing followed by bioinformatic analyses revealed a considerable number of sequence variants, single nucleotide polymorphisms (SNPs), and insertions and deletions (InDels) in the genomes. Considering the variations in disease response and the underlying variations in the sequenced genomes, it can be speculated that some of the phenotypic variations (against CuLCrV and SiGMFV) could be due to a high level of genomic variation in the host. Future genome-wide association studies with the identified genomic variants may shed some light on this.

The production and quality of Phaseolusvulgaris (snap bean) have been negatively impacted by leaf crumple disease caused by two whitefly-transmitted begomoviruses: cucurbit leaf crumple virus (CuLCrV) and sida golden mosaic Florida virus (SiGMFV), which often appear as a mixed infection in Georgia. Host resistance is the most economical management strategy against whitefly-transmitted viruses. Currently, information is not available with respect to resistance to these two viruses in commercial cultivars. In two field seasons (2018 and 2019), we screened Phaseolus spp. genotypes (n = 84 in 2018; n = 80 in 2019; most of the genotypes were common in both years with a few exceptions) for resistance against CuLCrV and/or SiGMFV. We also included two commonly grown Lima bean (Phaseolus lunatus) varieties in our field screening. Twenty Phaseolus spp. genotypes with high to moderate-levels of resistance (disease severity ranging from 5%–50%) to CuLCrV and/or SiGMFV were identified. Twenty-one Phaseolus spp. genotypes were found to be highly susceptible with a disease severity of ≥66%. Furthermore, based on the greenhouse evaluation with two genotypes-each (two susceptible and two resistant; identified in field screen) exposed to viruliferous whiteflies infected with CuLCrV and SiGMFV, we observed that the susceptible genotypes accumulated higher copy numbers of both viruses and displayed severe crumple severity compared to the resistant genotypes, indicating that resistance might potentially be against the virus complex rather than against the whiteflies. Adult whitefly counts differed significantly among Phaseolus genotypes in both years. The whole genome of these Phaseolus spp. [snap bean (n = 82); Lima bean (n = 2)] genotypes was sequenced and genetic variability among them was identified. Over 900 giga-base (Gb) of filtered data were generated and >88% of the resulting data were mapped to the reference genome, and SNP and Indel variants in Phaseolus spp. genotypes were obtained. A total of 645,729 SNPs and 68,713 Indels, including 30,169 insertions and 38,543 deletions, were identified, which were distributed in 11 chromosomes with chromosome 02 harboring the maximum number of variants. This phenotypic and genotypic information will be helpful in genome-wide association studies that will aid in identifying the genetic basis of resistance to these begomoviruses in Phaseolus spp. View Full-Text
Keywords: cucurbit leaf crumple virus; sida golden mosaic Florida virus; whitefly; snap beans; lima beans cucurbit leaf crumple virus; sida golden mosaic Florida virus; whitefly; snap beans; lima beans
►▼ Show Figures 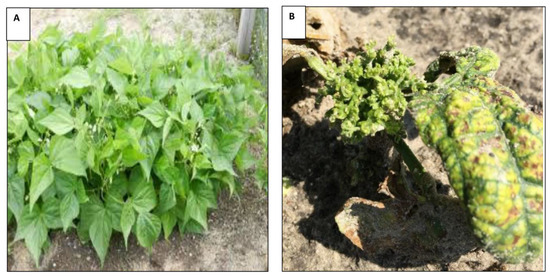