Post-introductory demographic history of biological control organisms can be complex to model but can be characterized by estimating four major “parameters” of populations using genomic data—population size change, adaptation, admixture or migration and inbreeding [17], (Box 1). Here we provide an overview of these parameters and discuss how they can be estimated from genomic data derived from organisms released for biological control.

Non-random mating of close relatives in a population reduces genetic diversity, elevates homozygosity and fixes deleterious mutations (genetic load) [94,95,106]. This inbreeding depression not only reduces population fitness but also results in population structure due to genetic drift, wherein individuals within a subpopulation are genetically more similar to each other than to individuals from other subpopulations.
Inbreeding, although widely expected during primary introductions of species for biological control, is yet to be characterized in most species at the genetic level. Some cases of inbreeding have been reported in field populations of the convergent lady beetle, Hippodamia convergens [98] and in the Asian lady beetle, Harmonia axyridis [20]. However, understanding the long-term effects of inbreeding in these and other species using genomic data remains a nascent endeavor.
Estimating inbreeding using genetic data from populations of biological control organisms in conjunction with assays of fecundity, competition and efficiency of feeding on pests can inform success of biological control programs. For example, lab-inbred (Eastern and Western USA) populations compared to outbred (augmented Eastern-Western USA hybrid) populations of H. convergens, lack phenotypic variability despite genetic differences and exhibit equitable success in pea aphid utilization [107]. Tools to estimate inbreeding often use summary statistics such as Identity By Descent (IBD) probabilities, inbreeding coefficients and runs of homozygosity (ROH), often only delimited by the types of genetic data used to compute them.

What comprises a successful biological control program? As summarized by [108] based on more than 800 studies, primary indicators of success in biological control are reduced pest abundance and increased pest mortality, relative target versus non-target effects and the type of biological control organism - generalist (polyphagous) versus specialist. In Table 2 we develop a population genomic framework for five measures of success of biological control organisms sensu [108]—(1) efficacy and establishment, measured using genetic diversity estimates; (2) spatio-temporal distribution, measured with divergence times and post-introductory evolutionary history; (3) managed breeding techniques, informed using studies of natural selection; (4) non-target effects and invasiveness, assessed via genetics of populations in imported or augmented environments; and (5) biotic effects on target/control organisms, measured using estimates of population structure, gene flow and inbreeding.
We propose that studies of success of biological control are essentially incomplete without a sufficient mix of manipulative experiments and genomics, which provide foundational insight into crucial ecological factors. Common denominators affect the ability of biological control organism populations to (i) establish, persist and grow in an introduced environment, (ii) withstand environmental and genomic pressures and evolve adaptively, (iii) avoid “escaping” into invasiveness and (iv), broadly, limit differential non-target effects. These factors are phenotypic differences in traits, which have underlying genomic differences within and between populations and ecological variation across geographically distinct populations of the species. Drawing on a classic example, the successful introduction of the vedalia beetle, Rodolia cardinalis, to suppress the cottony-cushion scale, Icerya purchasi, has been employed for over a century. Vedalia beetles are specialists, multivoltine, long-lived and highly efficient in obtaining prey [22]. Importantly, these are all ecological/phenotypic traits that can be characterized readily using genomic approaches [110,111]. Thus, experimental evolution and/or simulation studies based on existing genomic diversity of populations of the vedalia beetle (and other biological control organisms) could elucidate the effects of standing genomic variation on adaptability to novel environments. Efforts to quantify such variation in insect predators, including transcriptome and mitochondrial genome sequencing of C. septempunctata [112,113] and whole genome sequencing of H. axyridis (Havens et al., http://f1000research.com/posters/1096169), are underway. Additionally, a growing literature on landscape genomics methods (summarized in [114,115] highlights incorporating models of the distribution of populations in integrative studies of ecological and genomic variation [116]. Ultimately, new methods and software for jointly estimating demography and ecological parameters using genomic and geographical data should prove indispensable in studying the establishment of biological control organisms in novel environments.

4.2. Suggested Pipeline For Including Genomics Into Biological Control Programs

Rendering biological control more predictable, thus increasing the estimated 10 percent of reported attempts being successful, has been a long-term goal of applied ecologists and entomologists Gurr & Wratten, 1999 and Gurr et al., 2012 [2,13] argue that a majority of this failure rate concerns disregard for habitat requirements of the biological control organisms. They suggest that microhabitat manipulation (host ranges, prey/food availability, microclimates, etc.) ought to improve the chances of success. Although arguably true in several cases [117], genetic drift, natural selection and non-random mating surely play important and yet often undetermined roles as well [12,118,119]. However, predicting the evolutionary responses of organisms utilized in biological control is no easy task, as the number of contributing factors is formidable. Here we suggest four major population genetic processes—population size change, selection, gene flow and inbreeding—that, when quantified, can proffer important evidence of short- and long-term evolutionary trajectories of introduced organisms and their target species. Plummeting sequencing and genotyping costs and accelerated development of statistical methods and population genomics pipelines to estimate evolutionary parameters under a variety of demographic models, render these crucial insights more accessible. Thus, we propose a nine-step paradigm based on evolutionary and ecological principles—a ‘pipeline’ for applied ecologists and entomologists to enhance the likelihood of successful biological control programs.

We thank members of the Sethuraman Lab for their help with proofreading this review. 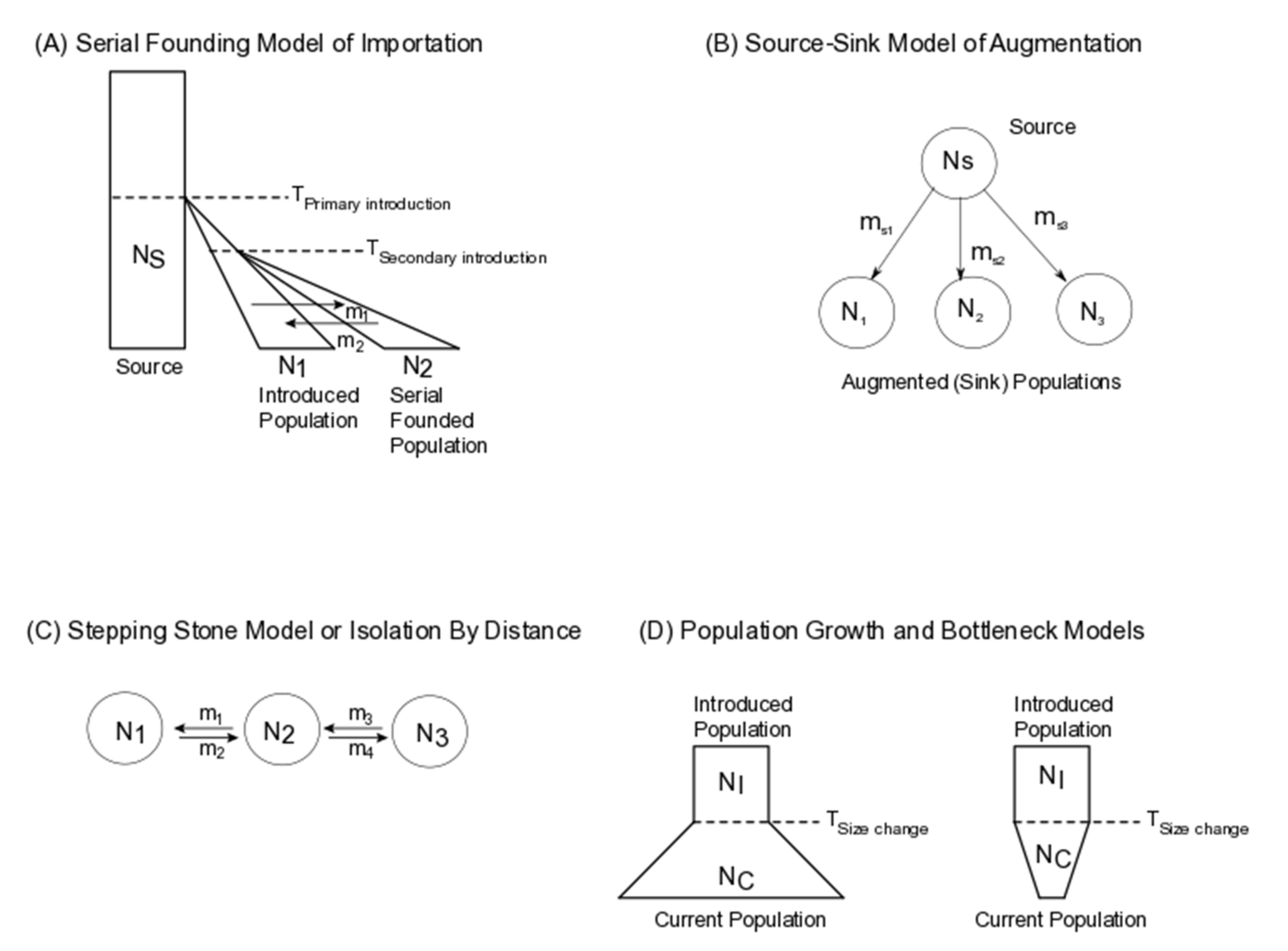