Migrant populations of Helicoverpa zea (Boddie) captured during 2002, 2005, 2016, and 2018 from Landisville and Rock Springs in Pennsylvania, USA were genotyped using 85 single nucleotide polymorphism (SNP) markers. Samples (n = 702) genotyped were divided into 16 putative populations based on collection time and site. Fixation indices (F-statistics), analysis of molecular variance, and discriminant analysis of principal components were used to examine within and among population genetic variation. The observed and expected heterozygosity in putative populations ranged from 0.317–0.418 and 0.320–0.359, respectively. Broad range of FST (0.0–0.2742) and FIS (0.0–0.2330) values indicated different genotype frequencies between and within the populations, respectively. High genetic diversity within and low genetic differentiation between populations was found in 2002 and 2005. Interestingly, high genetic differentiation between populations from two collection sites observed in 2018 populations was not evident in within-site comparisons of putative populations collected on different dates during the season. The shift of H. zea population genetic makeup in 2018 may be influenced by multiple biotic and abiotic factors including tropical storms. Continued assessment of these peripheral populations of H. zea will be needed to assess the impacts of genetic changes on pest control and resistance management tactics. View Full-Text
Keywords: Helicoverpa; corn earworm; bollworm; SNP; population genetics; bollworm; genetic drift; DAPC Helicoverpa; corn earworm; bollworm; SNP; population genetics; bollworm; genetic drift; DAPC
►▼ Show Figures 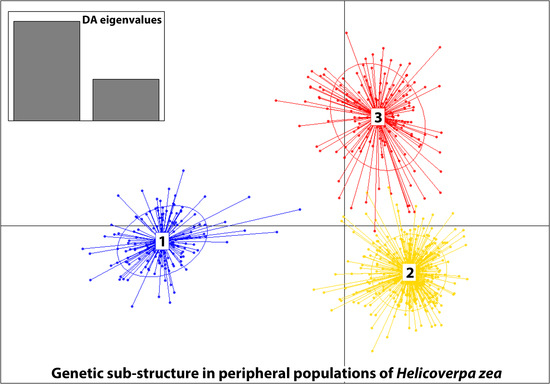