Concanavalin A (ConA), a legume lectin, has been drawing increasing attention in recent years concerning its toxicity against insects and its potential application in pest management. In an attempt to evaluate the effect of ConA on potato psyllid (Bactericera cockerelli), an economically important pest of solanaceous crops, the effect of ConA on potato psyllid survival, psyllid gut nuclear morphology, and expression of psyllid caspase genes were evaluated. Our results determined that artificial diet-feeding assays using ConA had deleterious effects on potato psyllids, resulting in significant psyllid mortality following ingestion. We also found that an apoptotic response was induced by ConA in psyllid midgut cells, which was demonstrated by the DNA fragmentation and abnormal nuclear architecture in the midgut cells. Following ConA ingestion, there was also upregulation of caspase genes in the psyllid midguts. Therefore, a key mechanism behind ConA toxicity towards potato psyllid probably involves the induction of apoptosis in midgut cells. This study could provide a better understanding of the mechanisms underlying ConA toxicity in insects and be a stepping stone towards the development of new psyllid control strategies based on plant lectins. View Full-Text
Keywords: concanavalin A; lectin; toxicity; potato psyllid; midgut; apoptosis concanavalin A; lectin; toxicity; potato psyllid; midgut; apoptosis
►▼ Show Figures 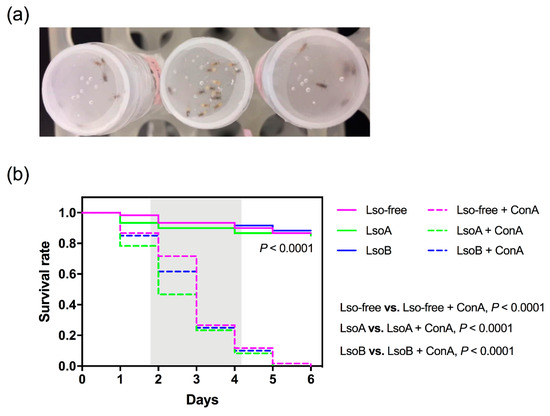