Evaluation of the Physiological Host Range for the Parasitoid Ooencyrtus mirus, a Potential Biocontrol Agent of Bagrada hilaris
Previous Article in Journal

Use of Molecular Gut Content Analysis to Decipher the Range of Food Plants of the Invasive Spotted Lanternfly, Lycorma delicatula

Azaleas (Rhododendron L. spp.) are widely grown ornamental plants in eastern and western regions of the USA. The azalea lace bug, Stephanitis pyrioides (Scott) (Hemiptera: Tingidae), is an important insect pest of azaleas. Adults and nymphs of S. pyrioides consume chlorophyll in azalea foliage, and severely affected plants appear bleached. Neonicotinoid insecticides are effective and widely used for S. pyrioides control; however, nursery growers and landscape professionals are concerned about nontarget effects on beneficial insects and demand neonicotinoid-free plants. There is clearly a need to develop reduced-risk control strategies for S. pyrioides. The insect growth regulator (IGR) novaluron elicits transovarial activity when adult S. pyrioides are exposed to it. However, it is not certain whether transovarial effects can be observed when S. pyrioides adults that colonize the abaxial leaf surface ingest novaluron residues deposited on the adaxial leaf surface. Experiments were conducted to assess transovarial activity upon exposure to various application rates of novaluron alone and novaluron with various adjuvants. The numbers of nymphs were significantly lower when the full rate of novaluron was applied on the adaxial surface of leaves compared to the number of nymphs on non-treated leaves. The densities of nymphs were not significantly different between the half and full rates of novaluron treatment. When novaluron with various adjuvants was applied to the adaxial surface of the leaves, the densities of nymphs were significantly lower under the novaluron treatments compared to the non-treated leaves, regardless of the type of adjuvant added. There was no significant difference between treatment with novaluron alone and the treatments of novaluron with adjuvants. These data show that transovarial activity was elicited in adults of S. pyrioides when novaluron was applied on the adaxial leaf surface. View Full-Text
Keywords: insect growth regulator; novaluron; azalea lace bug; azalea; spray insect growth regulator; novaluron; azalea lace bug; azalea; spray
►▼ Show Figures 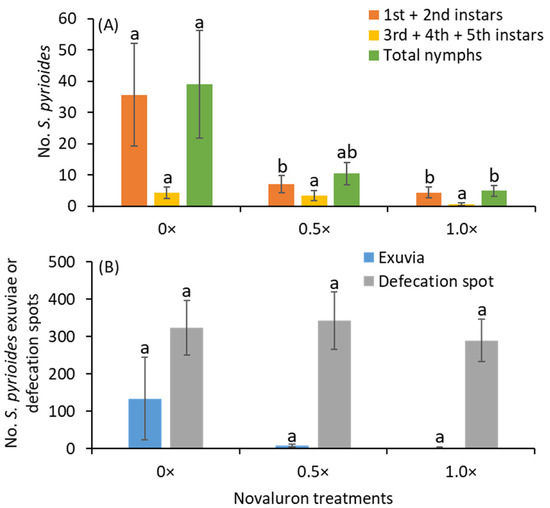