Evaluation of the Physiological Host Range for the Parasitoid Ooencyrtus mirus, a Potential Biocontrol Agent of Bagrada hilaris

The thelytokous egg parasitoid Ooencyrtus mirus Triapitsyn and Power (Hymenoptera: Encyrtidae) was recovered from brassica plant debris in Pakistan in an effort to find a biological control agent of the invasive bug Bagrada hilaris (Burmeister) (Heteroptera: Pentatomidae) in North America. As the first step in determining the overall host range of this parasitoid, adult females were exposed to the eggs of eight alternate pentatomid host species, two non-pentatomid heteropterans, and two lepidopterans, in choice and no-choice tests. Although O. mirus was more successful on B. hilaris than the other species in terms of the number of the eggs laid, the number of emerged progeny, and the developmental time of the progeny, it was able to reproduce on all of the alternate hosts except for one of the lepidopterans, whose eggs appeared too small for this parasitoid. The results show O. mirus to be a generalist parasitoid species with a preference for B. hilaris. The results also indicate that there is a linear relationship between the mean body length of O. mirus females and the mean host egg weight with an adjusted of 0.90. The implications of this study on the release of O. mirus for the control of B. hilaris are discussed. View Full-Text
Keywords: pentatomidae; encyrtidae; host acceptance; host suitability; bagrada bug; egg parasitoid pentatomidae; encyrtidae; host acceptance; host suitability; bagrada bug; egg parasitoid
►▼ Show Figures 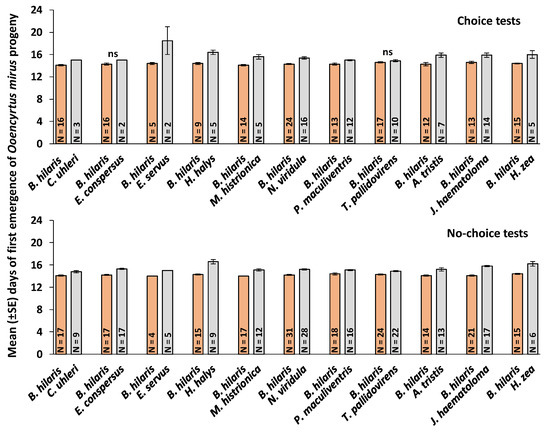