Dispersibility of the Pale Grass Blue Butterfly Zizeeria maha (Lepidoptera: Lycaenidae) Revealed by One-Individual Tracking in the Field: Quantitative Comparisons between Subspecies and between Sexes
Previous Article in Journal

The Roles of DNA Methyltransferases 1 (DNMT1) in Regulating Sexual Dimorphism in the Cotton Mealybug, Phenacoccus solenopsis

First Comprehensive Study of a Giant among the Insects, Titanus giganteus: Basic Facts from Its Biochemistry, Physiology, and Anatomy

Titanus giganteus is one of the largest insects in the world, but unfortunately, there is a lack of basic information about its biology. Previous papers have mostly described Titanus morphology or taxonomy, but studies concerning its anatomy and physiology are largely absent. Thus, we employed microscopic, physiological, and analytical methods to partially fill this gap. Our study focused on a detailed analysis of the antennal sensilla, where coeloconic sensilla, grouped into irregularly oval fields, and sensilla trichoidea were found. Further, the inspection of the internal organs showed apparent degeneration of the gut and almost total absence of fat body. The gut was already empty; however, certain activity of digestive enzymes was recorded. The brain was relatively small, and the ventral nerve cord consisted of three ganglia in the thorax and four ganglia in the abdomen. Each testis was composed of approximately 30 testicular follicles filled with a clearly visible sperm. Chromatographic analysis of lipids in the flight muscles showed the prevalence of storage lipids that contained 13 fatty acids, and oleic acid represented 60% of them. Some of our findings indicate that adult Titanus rely on previously accumulated reserves rather than feeding from the time of eclosion. View Full-Text
Keywords: brain; Cerambycidae; chromatography; compound eye; digestive enzyme; electron microscopy; lipid metabolism; muscle; sensilla; testes brain; Cerambycidae; chromatography; compound eye; digestive enzyme; electron microscopy; lipid metabolism; muscle; sensilla; testes
►▼ Show Figures 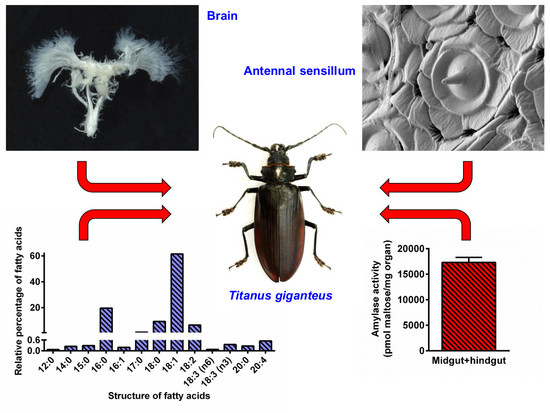