The Role of Chrysoperla carnea (Steph.) (Neuroptera: Chrysopidae) as a Potential Dispersive Agent of Noctuid Baculoviruses

Genetic Diversity of Mitochondrial DNA of Bemisia tabaci (Gennadius) (Hemiptera: Aleyrodidae) Associated with Cassava and the Occurrence of Cassava Mosaic Disease in Zambia

Bemisia tabaci is an important vector that transmits cassava brown streak viruses and cassava mosaic begomoviruses that cause cassava brown streak and cassava mosaic diseases, respectively. In 2013 and 2015 we carried out a study to determine the genetic variability within the Bemisia tabaci complex associated with cassava in Zambia. This investigation made use of mitochondrial cytochrome oxidase I gene sequences of samples collected from selected provinces of Zambia. We found three population subgroups (SGs): SSA1-SG1, SSA1-SG2 and SSA1-SG3 within the sub-Saharan Africa 1 (SSA1) genetic group. Whitefly abundance and the incidence of cassava mosaic disease were both greatest in Western Province, in which the SSA1-SG1 subgroup predominated. Establishing which genetic groups and populations of the B. tabaci species complex are associated with cassava mosaic disease and their distribution in the country is key to guiding the strategic deployment of resources to monitor disease spread and ensure food security for millions of cassava-dependent households.

Bemisia tabaci is an important vector of cassava brown streak viruses and cassava mosaic begomoviruses, the causal agents of cassava brown streak disease and cassava mosaic disease (CMD), respectively. A study was carried out to determine the genetic variability of B. tabaci associated with cassava and the occurrence of CMD in Zambia in 2013 and 2015. Phylogenetic analysis showed the presence of only the sub-Saharan Africa 1 (SSA1) genetic group in Zambia. The SSA1 population had three population subgroups (SGs): SSA1-SG1, SSA1-SG2 and SSA1-SG3. All three SSA1 population subgroups occurred in Western Province. However, only SSA1-SG3 occurred in Eastern Province, while only SSA1-SG1 occurred in North Western and Luapula Provinces. Adult B. tabaci were most abundant in Western Province in 2013 (11.1/plant) and 2015 (10.8/plant), and least abundant (0.2/plant) in Northern Province in both 2013 and 2015. CMD was prevalent in all seven provinces surveyed, with the highest incidence recorded in Lusaka Province in both 2013 (78%) and 2015 (83.6%), and the lowest in Northern Province in both 2013 (26.6%) and 2015 (29.3%). Although SSA1-SG1 occurred at greater abundances than the other subgroups, there was no direct association demonstrated between whitefly subgroup and incidence of CMD. Establishing which B. tabaci genetic groups and populations are associated with CMD and their distribution in the country is a key factor in guiding the development of CMD control strategies for cassava-dependent households. View Full-Text
Keywords: whitefly; genetic diversity; mtCOI; Manihot esculenta; CMD; Southern Africa whitefly; genetic diversity; mtCOI; Manihot esculenta; CMD; Southern Africa
►▼ Show Figures 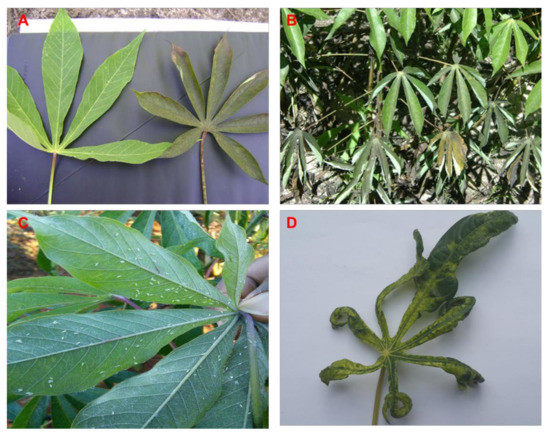