Several insect innate immune mechanisms are activated in response to infection by entomopathogenic nematodes (EPNs). In this review, we focus on the coagulation of hemolymph, which acts to stop bleeding after injury and prevent access of pathogens to the body cavity. After providing a general overview of invertebrate coagulation systems, we discuss recent findings in Drosophila melanogaster which demonstrate that clots protect against EPN infections. Detailed analysis at the cellular level provided insight into the kinetics of the secretion of Drosophila coagulation factors, including non-classical modes of secretion. Roughly, clot formation can be divided into a primary phase in which crosslinking of clot components depends on the activity of Drosophila transglutaminase and a secondary, phenoloxidase (PO)-dependent phase, characterized by further hardening and melanization of the clot matrix. These two phases appear to play distinct roles in two commonly used EPN infection models, namely Heterorhabditis bacteriophora and Steinernema carpocapsae. Finally, we discuss the implications of the coevolution between parasites such as EPNs and their hosts for the dynamics of coagulation factor evolution. View Full-Text
Keywords: insect immunity; innate immunity; hemocytes; secretion; nematodes; coagulation; clotting; phenoloxidase; transglutaminase insect immunity; innate immunity; hemocytes; secretion; nematodes; coagulation; clotting; phenoloxidase; transglutaminase
►▼ Show Figures 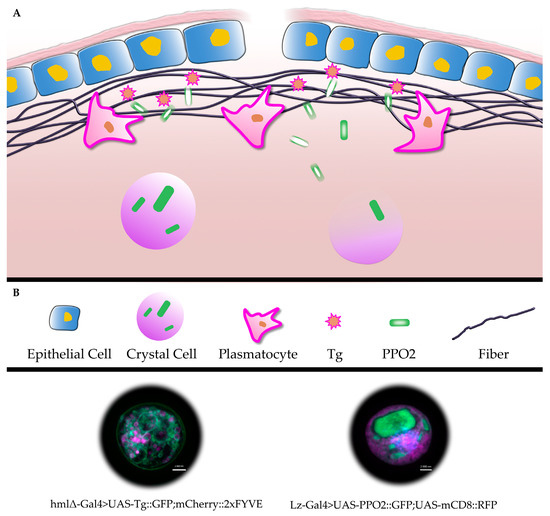