Lessons from One Fastidious Bacterium to Another: What Can We Learn about Liberibacter Species from Xylella fastidiosa
Next Article in Special Issue

Effects of a Resident Yeast from the Honeybee Gut on Immunity, Microbiota, and Nosema Disease

Behavioral Genetics of the Interactions between Apis mellifera and Varroa destructor

Reproductive traits of V. destructor mites were analyzed in the worker brood of seven colonies of A. mellifera located in the apiary of the INRA institute of Avignon, France, from the end of August to the end of October 2018 (Table S1). These hives had not been treated against V. destructor for over a year before the start of the experiments. Brood cells that were at least seven days post-capping (i.e., purple eyes pupal stage) were carefully opened with insect tweezers and their content was examined with stereo microscopes. The examination of the brood cells consisted of: (i) observing whether the capping had been manipulated by the workers (“recapping behavior”), (ii) noting the age of the pupae (from day 7 to day 11 post-capping) following [31], (iii) counting the number of foundresses and (iv) carefully describing all other varroa stages found in the cells, according to the methods detailed in [46]. The recapping behavior was monitored by checking whether the silk that usually lines the underside of the cap was lacking (recapped cell) or not (untouched cell) following [39]. A successful reproduction was presumed if at least one offspring female had sufficient time to mate with her brother before their host’s emergence. In all other cases (e.g., no male or no offspring females in the cells, not enough time for reproduction before emergence, etc.), the reproduction was considered unsuccessful. Using these observations, the presence/absence of mites, the number of foundresses, the mite reproduction level and the recapping status of every cell were obtained. Colonies were screened every two weeks in order to assess the temporal variability of the traits. However, due to complications (e.g., requeening of colony A), each of the colonies could not be screened at all time points (Table S1). In all, 2627 cells were phenotyped in the seven colonies (Table S1).

After phenotyping the brood, the pupae were collected and a hind leg per individual was dissected and placed in a 96 PCR well plate containing 100 µL of 5% Chelex solution per well. The location of each pupa on the plate was recorded to be able to keep tracks of the phenotypes of the individual cells during the downstream analyses. Directly after sampling, 5 µL of proteinase K (10 mg/mL) was added to each well of the plates and DNA extraction protocols were run in a thermocycler according to [47]. The plates containing the DNA were then stored at −20 °C until further use.
To analyze whether the different phenotypes matched the workers’ genotypes, the individuals from three colonies (B, D and E, N = 556 pupae) were sent to Genoscreen (Lille, France) to be genotyped on a 3730 XL sequencer (Applied Biosystems®, Foster City, CA, USA) at five microsatellite markers [48,49] (Table S2) using a single marker per PCR reaction and following the standard conditions detailed in [50]. The three colonies used for genotyping were selected according to their level of variability of the phenotypes, the dates when they could be sampled, and the number of pupae collected. Once retrieved, the genotypic data were scored manually using Peak Scanner v. 1.0 (Applied Biosystems®). The genotyping process was repeated once per sample if the first PCRs did not work. After this, individuals with missing data were discarded, resulting in a final dataset including 486 individuals.
To test the independence of the microsatellite markers, linkage disequilibrium tests were run for each pair of loci on the overall dataset using the software FSTAT v. 2.9.3. [51]. The number of alleles and observed heterozygosity levels were then estimated for each locus in every colony and over the three colonies (Table S2) using the microsatellite toolkit Excel add-on [52]. To assess whether the markers used were variable enough to accurately discriminate distinct bee genotypes, the Non-Detection Error coefficient (NDE) was calculated according to [50]. This index is derived from the number and frequency of alleles at the markers used and represents a probability of non-discrimination between two different genotypes due to a lack of polymorphism in the marker set used.

2.3. Testing the Links between Phenotypes and Genotypes

To identify subfamilies in the colonies, the queen and drone alleles of the genotyped workers were identified based on the frequency and pattern of the alleles, following the guidelines from [50]. With this procedure, the patrilines of the workers in the three colonies were reconstructed. In addition, the Non-Sampling Error coefficient (NSE) was estimated for each colony in order to assess whether the sample size used in this study was large enough to accurately grasp the diversity of subfamilies in each colony. This second index takes into account the distribution of the individuals of each genotype and provides an estimate of the number of patrilines that have not been sampled [50].
After these controls were performed, statistical analyses were conducted. Four independent Generalized Linear Models (GLMs) were used to assess the effects of three factors on the four different phenotypes: the patrilines of the individual pupae on which the traits were recorded, the colony of origin, and the date of sampling. To do so, only patrilines with at least five individuals were kept in the dataset. This cutoff number was selected as it allows keeping a sufficient number of patrilines for the analyses while retaining enough of the samples to allow assessing the variance within subfamilies. Given that no patriline was found in two colonies simultaneously, we used a nested design to account for both the variability explained by the differences between colonies and by the patrilines within each of the colonies. For three traits (infestation status, reproduction and recapping) the family used was Binomial, and for the fourth (infestation level) a Quasipoisson family was used. These statistical analyses were performed in R v. 3.6.1. [53].

In all, 2627 cells containing at least seven days old worker pupae were analyzed in the seven colonies screened during the phenotyping step (Table S1). These phenotypic results were variable across colonies (Table 1). Notably, recapping was significantly correlated with the mite infestation level of the colonies (r2 = 0.396, p = 0.005). Yet, at the individual level, recapping was not systematically higher in infested cells (Table 1), indicating that they may not be preferentially targeted by workers performing this behavior.

Three colonies out of the seven phenotyped were genotyped. Highly significant genetic disequilibrium was found over all samples between each pair of markers, showing that the five markers were independent of one another. In addition, the Non-Detection Error of the microsatellite markers used was small (NDE = 0.25–1.70%), indicating a low probability of not being able to discriminate two individuals with different genotypes (Table 2). Overall, 57 patrilines were found in the 486 individuals genotyped. Moreover, the Non-Sampling Error was small in all three colonies (NSE = 1.10–2.44), indicating that the great majority of subfamilies were reconstructed. Interestingly, none of the patrilines was found in two colonies simultaneously. In addition, the subfamilies were found evenly across the different sampling dates (Table S3).

3.3. Association between Phenotypes and Genotypes

The statistical analysis using GLMs revealed that the honeybee subfamilies could not significantly explain the observed variability of the four phenotypes investigated (Table 3). Moreover, the expression of these traits across patrilines revealed no major deviation from the proportion of the phenotypes at the colony level (Figure 1, Figure 2 and Figure 3). Although the infestation status and infestation level did not vary significantly across the three colonies, mite reproduction and recapping did. Finally, all four traits were influenced significantly by the period of sampling (Table 3). In the three colonies sampled, the infestation status and level decreased slightly after the first sampling period (end of August) but increased notably towards the last period (end of October) (Table 1). A notable temporal decrease of mite reproduction was observed, whereas recapping showed an increased expression towards the end of the season (Table 1).

We have shown here that the dominant subfamilies of A. mellifera brood do not vary significantly in their attractiveness to V. destructor, do not distinctively impact mite reproduction, and are not differentially targeted by workers performing recapping behavior. While this work brings new insights into the co-evolution between the Western honeybee and its major parasite, our results also provide practical information for beekeeping. In fact, our findings suggest that two resistance traits believed to play a key role in the survival of A. mellifera colonies towards V. destructor infestation are recessive in the population we studied. Thus, breeding efforts relying on artificial insemination with sperm from resistant drones may only fail to produce colonies exhibiting the SMR and recapping traits. As this finding is in contradiction with others [38], further research should aim at comparing the genetic bases and inheritance mechanisms of these traits across A. mellifera populations to improve our current knowledge on this topic. This will surely help current breeding programs by allowing developing sustainable control strategies towards V. destructor to safeguard the Western honeybee’s valuable ecological and economical services across the globe.

This research was funded by The Persephone Charitable and Environmental Trust and supported by the ECOS program.

The authors want to thank Didier Crauser for maintaining the colonies and the INRA Abeilles et Environnement group for the productive working atmosphere. 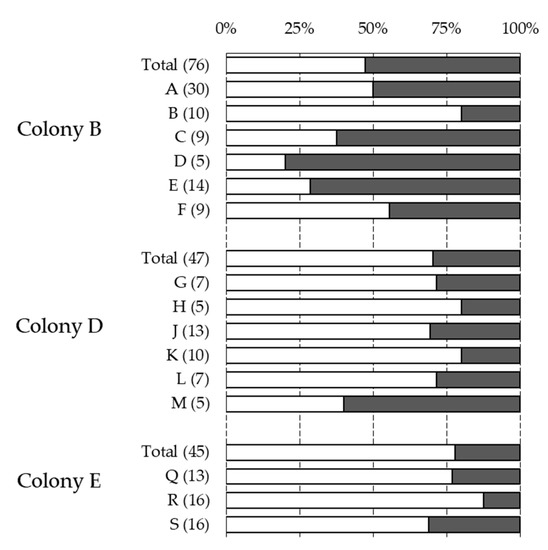 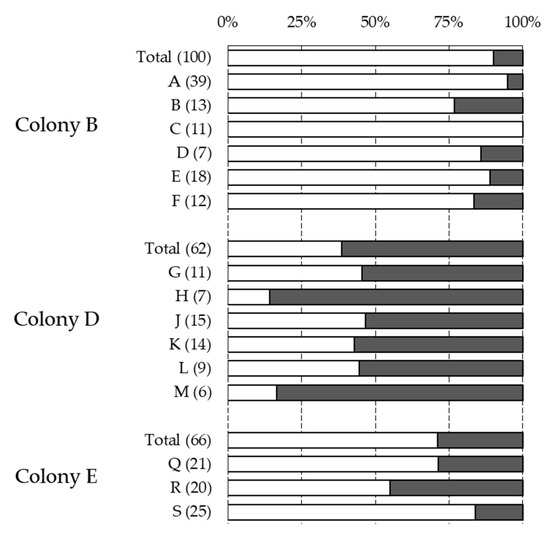 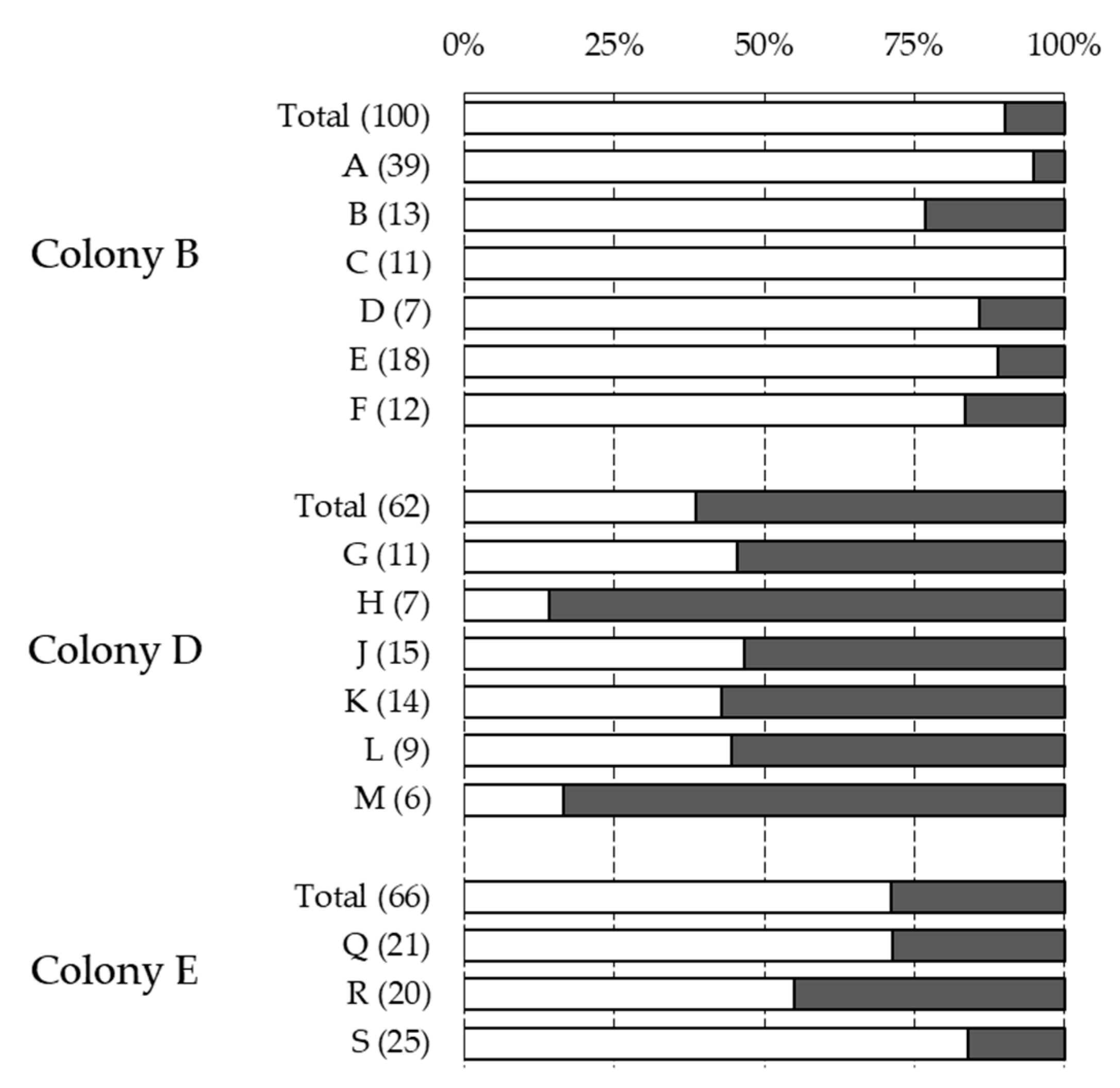