A Survey of Tick-Borne Bacterial Pathogens in Florida

The fall armyworm (FAW), native to the Americas, has rapidly invaded the whole of Southern China since January 2019. In addition, it can survive and breed in the key maize- and rice- growing area of the Yangtze River Valley. Furthermore, this pest is also likely to continue infiltrating other cropping regions in China, where food security is facing a severe threat. To understand the potential infestation area of newly-invaded FAW from the Yangtze River Valley, we simulated and predicted the possible flight pathways and range of the populations using a numerical trajectory modelling method combining meteorological data and self-powered flight behavior parameters of FAW. Our results indicate that the emigration of the first and second generations of newly-invaded FAW initiating from the Yangtze River Valley started on 20 May 2019 and ended on 30 July 2019. The spread of migratory FAW benefitted from transport on the southerly summer monsoon so that FAW emigrants from the Yangtze River Valley can reach northern China. The maize-cropping areas of Northeastern China, the Korean Peninsula and Japan are at a high risk. This study provides a basis for early warning and a broad picture of FAW migration from the Yangtze River Valley. View Full-Text
Keywords: Spodoptera frugiperda; exotic pest; windborne migration; atmospheric circulation; trajectory analysis; forecasting Spodoptera frugiperda; exotic pest; windborne migration; atmospheric circulation; trajectory analysis; forecasting
►▼ Show Figures 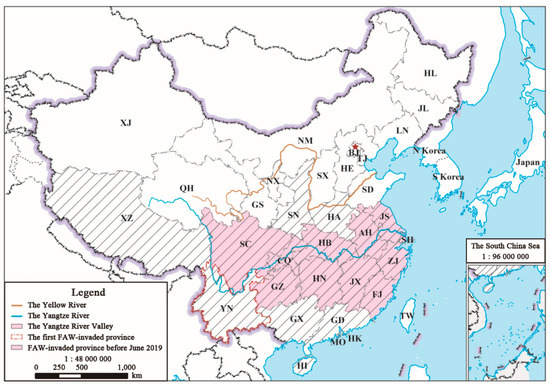