Honey bees forage across a large area, continually scouting the local landscape for ephemeral food resources. Beekeepers often rely on flowering plants in and around irrigated farmland to maintain their colonies during dry seasons, despite the potential risk of pesticide exposure. Recent declines in pollinator abundance and diversity have focused attention on the role of pesticides and their effects on honey bee health. This investigation examined two types of landscapes within a two-mile (3.2 km) radius of honey bee colonies: an intensive agricultural setting and a rural setting without intensive agriculture. More than 10,000 acres of agricultural land was surveyed to quantify the area of cultivated crops and the area treated with pesticides, including seed treatments and foliar applications of insecticides. Samples of honey, bee bread (stored pollen), beeswax, and adult bees were collected from hives in both landscape types and screened for pesticide residues to determine if foraging bees were transporting pesticides to hives. Some samples of bee bread and honey did contain pesticide residues, but these were below known lethal dose (LD50) levels for honey bees. Beeswax samples contained the highest levels of contamination, but most were still relatively low. Samples were screened for 174 common agricultural pesticides and metabolites, but only 26 compounds were detected during the two-year study. These included one defoliant, one insect growth regulator, five herbicides, six fungicides, six insecticides never used in beekeeping, and five insecticides/miticides and their metabolites, which are used in beekeeping and for various other agricultural purposes, as well as two miticides exclusively used by beekeepers to control Varroa destructor. Bee colonies foraging in agricultural landscapes are potentially exposed to numerous pesticide applications. While the residues detected in this study did not pose an acute lethal risk to adult honey bees, this study did not measure sublethal effects on bee colony health or performance, which merit further investigation.
Keywords: Apoideae; honey bee; Apis mellifera; pesticide; neonicotinoid; agriculture; pollinator decline; landscape; crops Apoideae; honey bee; Apis mellifera; pesticide; neonicotinoid; agriculture; pollinator decline; landscape; crops

Honey bees forage over an extensive area for the nectar and pollen they utilize as food. In agricultural landscapes, there is great potential for pesticide exposure of honey bees in the field, and for contamination of the hive and hive products. The Arkansas survey of area growers, although most certainly incomplete in documenting all pesticide applications, confirms that multiple products, in multiple chemical classes, are applied to the agricultural landscape routinely throughout the season as part of conventional agricultural production.
Despite the widespread use of these chemicals, both hobbyist and commercial beekeepers continue to maintain productive honey bee colonies in intensive agricultural areas [22]. Furthermore, colony productivity has been shown to increase with proximity to crop land [27], and research has also shown that mass flowering crops can benefit wild and managed bees, despite other risks posed by agricultural practices and land management [63,64,65].
The results of our limited investigation are consistent with other studies. Similar to Mullin et al. [31], who conducted one of the broadest and most geographically diverse studies, we found that the highest concentrations of detectable compounds were a result of beekeeper-applied products. These products, by design, have low toxicity relative to the dose required for adverse effects. To a lesser degree, fungicides and herbicides also have low general toxicity to honey bees, but are known to have synergistic effects with other pesticides, which increase the toxicity of one or more of the compounds [50,66,67]. The increasing buildup of pesticide contamination in combs over time can adversely affect honey bee health and survivorship [68,69,70]. Chronic exposure to sublethal levels of pesticides can impact honey bee health and immune response [51,71]. Pesticides are rarely, if ever, encountered individually, but more often simultaneously with others [39]. Efforts have been made to explore the toxicity of combinations of pesticides that are often found together [49,50,70,71].
Recent declines in honey bee populations cannot be attributed to any one single cause, but are likely the result of accumulated stresses from multiple causes [53]. The complex of the mite Varroa destructor (Anderson and Trueman) and the viruses they vector continues to be the greatest threat to honey bee health [72,73]. Other pathogens such as Nosema ceranae also affect honey bee health, productivity, and survivorship [74]. Additionally, bees must have access to adequate nutrition from floral resources in order to maintain health [75]. Most likely, a combination of multiple factors, including these and others, are responsible for recent declines in honey bee health and populations [53,76]. Optimal management of honey bee colonies must include a reduction of multiple stress factors, including sublethal exposure to pesticides, and discussions of honey bee health should not be limited to a narrow focus on pesticide exposure.
To expand upon this work, a similar survey could be conducted that includes records on the timing, formulations, and rates of pesticide applications for specific crop fields, and more frequent sampling through the season to more precisely determine when contaminants may be entering beehives, and how long particular applications may pose specific risks to bee colonies.

The authors wish to thank Ples Spradley and Elmer Wilman, Jr. for hosting experimental hives on their property, as well as Tyler Fields for his assistance with apiary work. We are also grateful to the USDA-ARS for help in funding this study. 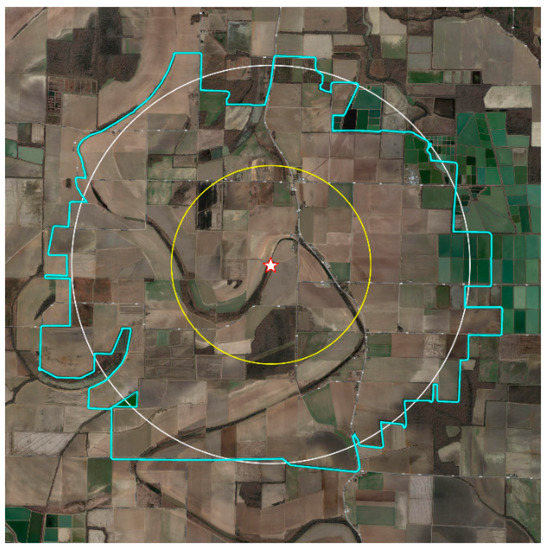 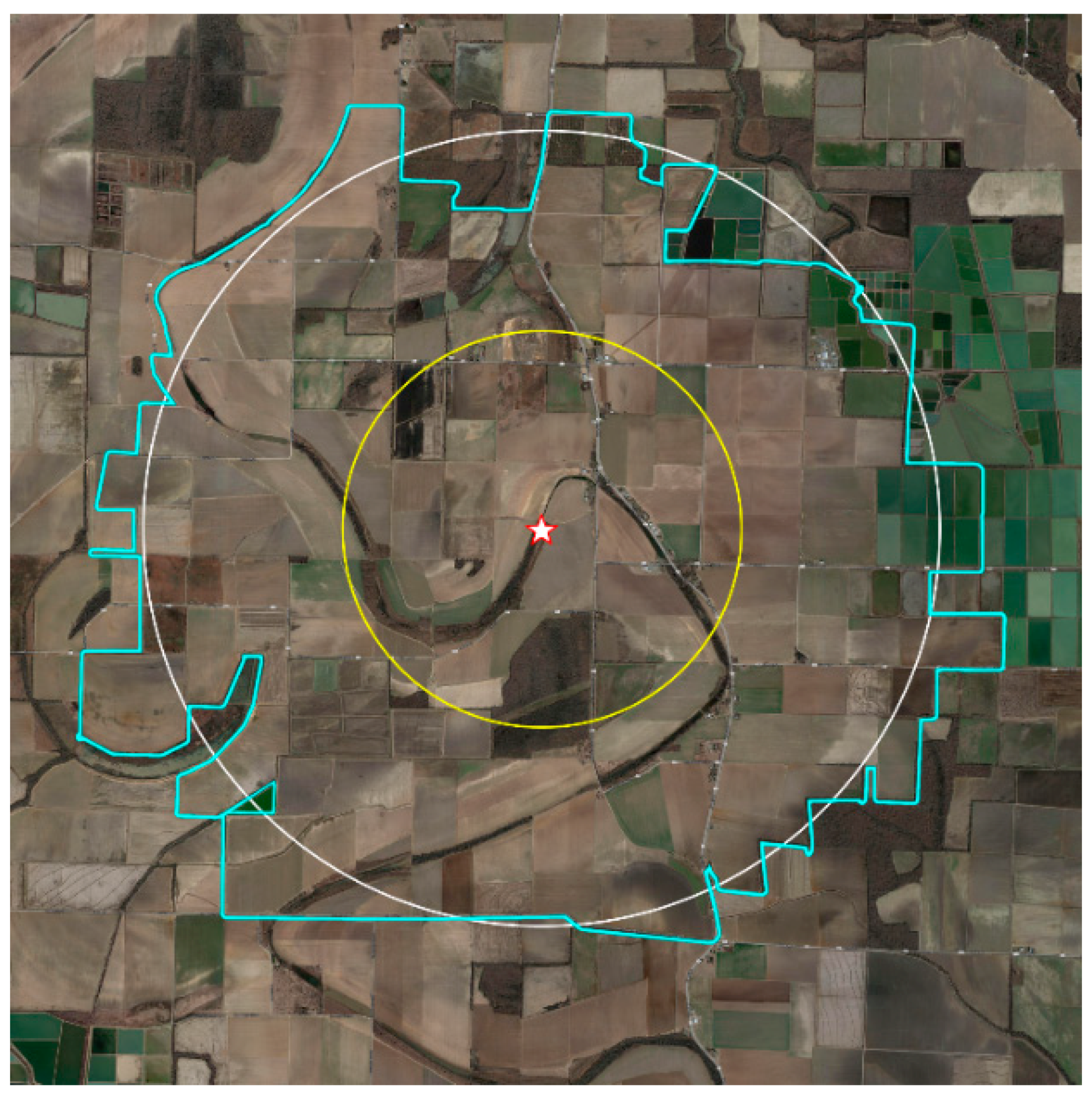 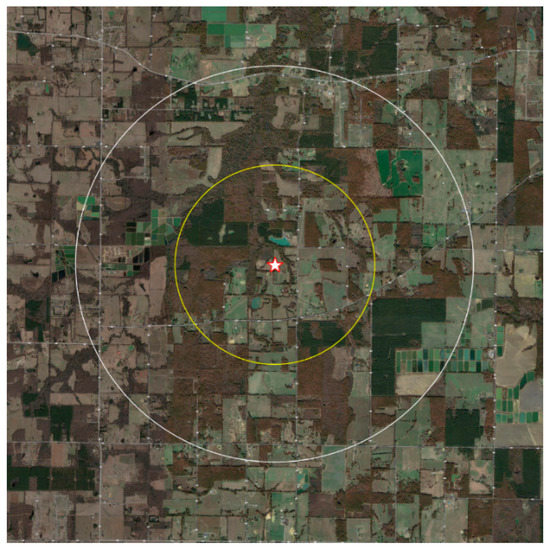 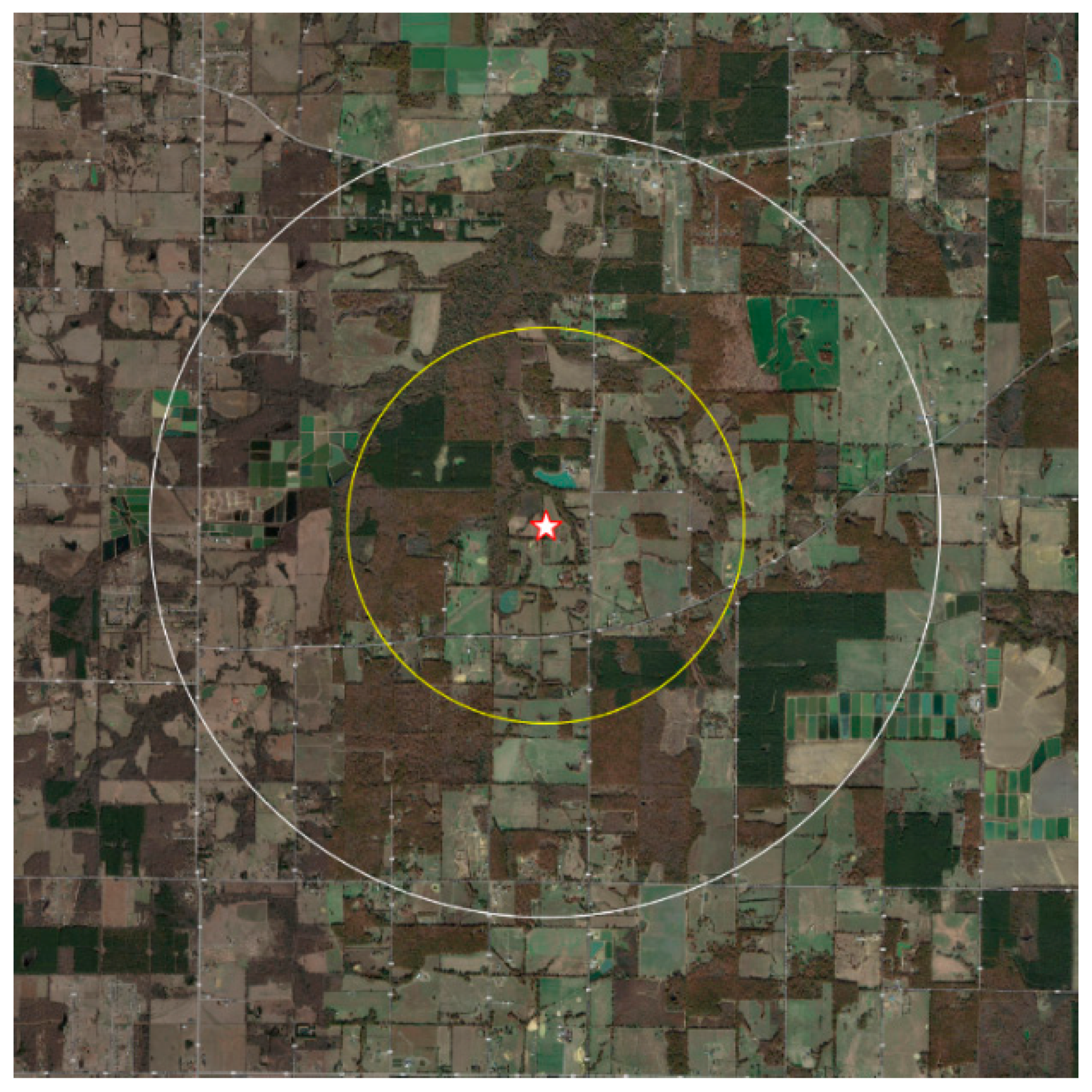 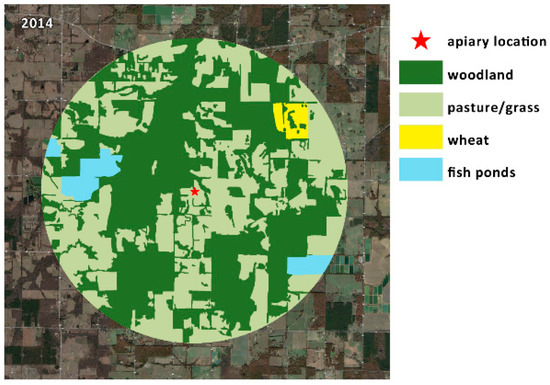 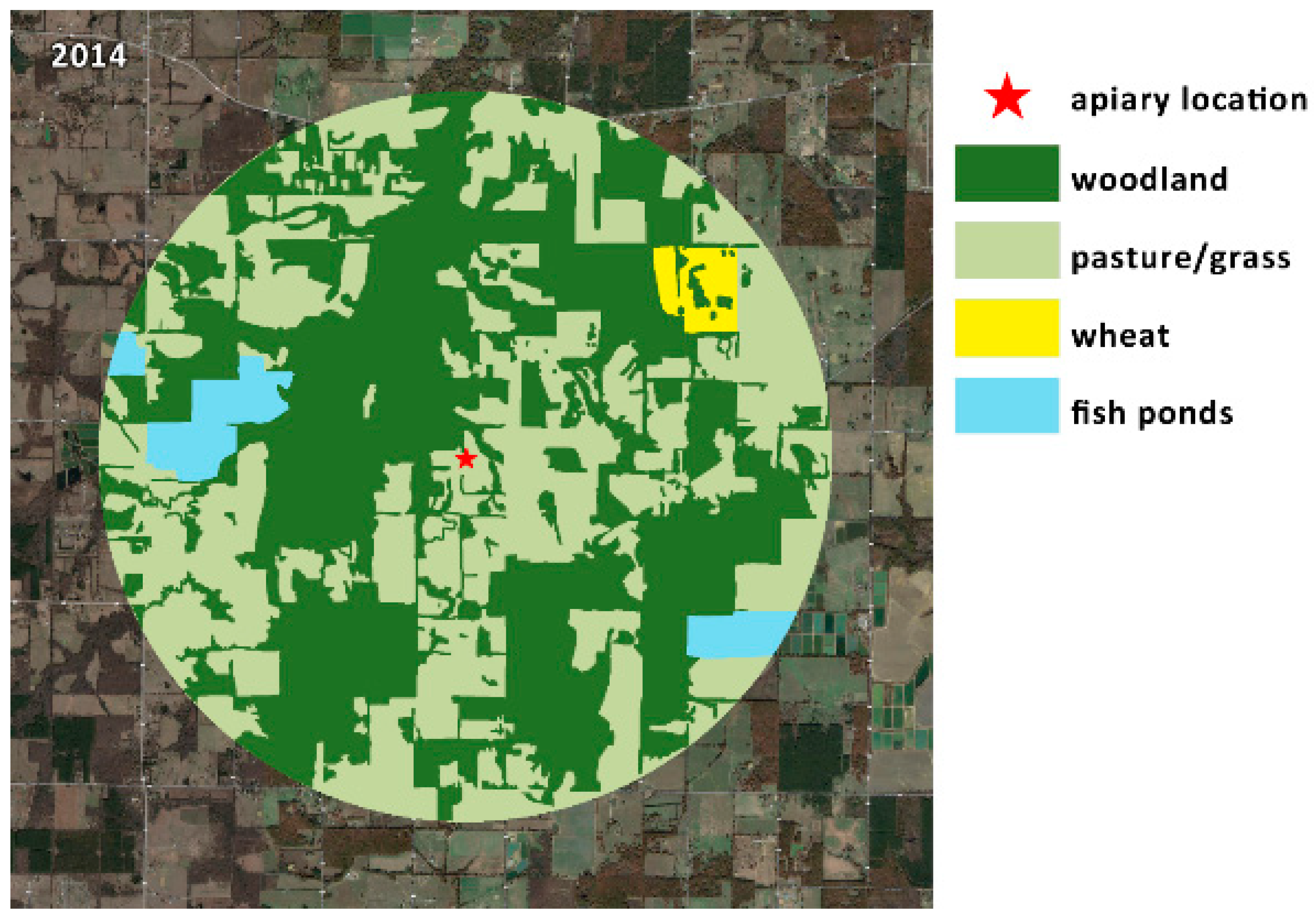