The Role of Annual Flowering Plant Strips on a Melon Crop in Central Spain. Influence on Pollinators and Crop
Previous Article in Journal

Osmia cornifrons (Radoszkowski) (Hymenoptera: Megachilidae) is an effective orchard pollinator. Considering the honey bee population decline in recent years, the conservation and propagation of O. cornifrons as an alternative managed pollinator is important in ensuring adequate pollination of tree fruit crops in the eastern United States. A field study was conducted to determine if nest modifications could reduce mite parasites and parasitoid natural enemies that attack managed O. cornifrons. Paraffin-coated paper liners (straws) were added to create modified nests, and were compared with the unmodified nests (i.e., nests without paper liners). In each nest, we recorded the number of nest cells with cleptoparasitic mites Chaetodactylus krombeini (Baker), and the presence of a parasitoid wasp Monodontomerus obscurus (Westwood). We also recorded the number of cocoons, male pupae, female pupae, and unconsumed pollen-nectar provision masses in these nests. Results showed that using paper liners in nest-tunnels greatly reduced the invasion of natural enemies of managed populations of O. cornifrons. Most notably, the addition of paper liners provided protection from invasion by C. krombeini mites, as the mean number of nest cells with mites were significantly lower in these lined nests compared to the nests without paper liners. A significantly higher number of male and female cocoons of O. cornifrons were recorded in the nests with paper liners. The population of M. obscurus was almost negligible in this field study. These results suggest that using nests with paper liners may accelerate the O. cornifrons population establishment and propagation in commercial orchards of rosaceous fruit crops, and possibly in other crops. View Full-Text
Keywords: mite; cleptoparasite; Japanese orchard bee; pollinator; pest control mite; cleptoparasite; Japanese orchard bee; pollinator; pest control
►▼ Show Figures 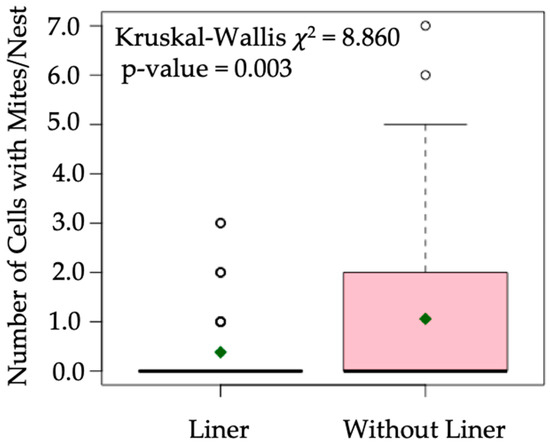