Fluids and lubricants are critical for the mechanical manufacturing processing of metals, due to a high amount of friction generated, also reflected as heat, could wear and damage tooling and machine components. The proper application of lubricants increases machinery lifetime, decreases long-term costs, and energy and time consumption due to the maintenance or components exchange/repairs. Besides being non-renewable, mineral oils bring consequences to the environment due to their low biodegradability and could affect the user with respiratory and skin diseases. Recently, due to an increase in environmental awareness, the search of biocompatible and efficient lubricants has become a technology goal. The vegetable oil-based lubricants are slowly emerging as ecofriendly and high-performance alternatives to petroleum-based lubricants. This study evaluates soybean, sunflower, corn and paraffinic oils reinforced with SiO2 nanoparticles. The thermal and tribological evaluations were performed varying the temperature and nanofiller concentrations. The thermal conductivity improvements were observed for all nanolubricants as the temperature and filler fraction increased. The highest thermal conductivities were observed at 323 K with 0.25 wt % SiO2. The soybean and corn oils unveiled a maximum enhancement of ~11%. The tribological evaluations showed that SiO2 addition, even in small concentration, resulted into a significant improvement on a load-carrying capacity. For instance, at 0.25 wt % enhancements of 45% and 60% were observed for soybean and sunflower oils, respectively. The coefficient of friction performance also showed enhancements between 10% and 26%. View Full-Text
Keywords: lubricant additives; thermal transport; wear testing; load-carrying capacity; SiO2 lubricant additives; thermal transport; wear testing; load-carrying capacity; SiO2
►▼ Show Figures 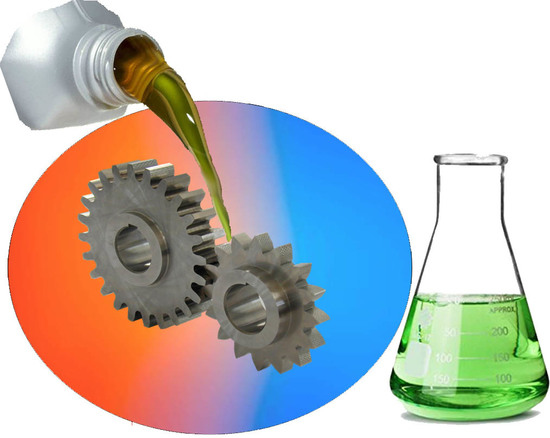