The present study provides molecular insight into the mechanisms underlying energy dissipation and lubrication of a smooth contact lubricated by an ionic liquid. We have performed normal and lateral force measurements with a surface forces apparatus and by colloidal probe atomic force microscopy on the following model systems: 1-ethyl-3-methyl imidazolium bis-(trifluoro-methylsulfonyl) imide, in dry state and in equilibrium with ambient (humid) air; the surface was either bare mica or functionalized with a polymer brush. The velocity-dependence of the friction force reveals two different regimes of lubrication, boundary-film lubrication, with distinct characteristics for each model system, and fluid-film lubrication above a transition velocity . The underlying mechanisms of energy dissipation are evaluated with molecular models for stress-activated slip and flow, respectively. The stress-activated slip assumes that two boundary layers (composed of ions/water strongly adsorbed to the surface) slide past each other; the dynamics of interionic interactions at the slip plane and the strength of the interaction dictate the change in friction -decreasing, increasing or remaining constant- with velocity in the boundary-film lubrication regime. Above a transition velocity , friction monotonically increases with velocity in the three model systems. Here, multiple layers of ions slide past each other (“flow”) under a shear stress and friction depends on a shear-activation volume that is significantly affected by confinement. The proposed friction model provides a molecular perspective of the lubrication of smooth contacts by ionic liquids and allows identifying the physical parameters that control friction. View Full-Text
Keywords: ionic liquids; friction; lubrication mechanisms; surface forces apparatus; atomic force microscopy ionic liquids; friction; lubrication mechanisms; surface forces apparatus; atomic force microscopy
►▼ Show Figures 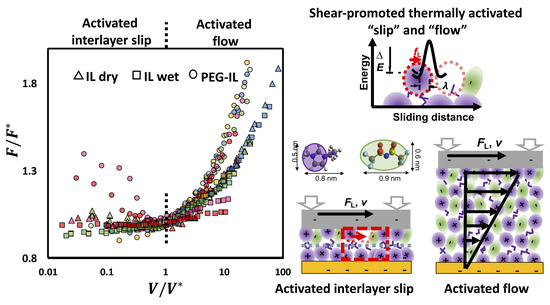