Frequency of Planets in Binaries
Previous Article in Journal

A Census of B[e] Supergiants
Previous Article in Special Issue

Binary systems are very common among field stars, yet the vast majority of known exoplanets have been detected around single stars. While this relatively small number of planets in binaries is probably partly due to strong observational biases, there is, however, statistical evidence that planets are indeed less frequent in binaries with separations smaller than 100 au, strongly suggesting that the presence of a close-in companion star has an adverse effect on planet formation. It is indeed possible for the gravitational pull of the second star to affect all the different stages of planet formation, from proto-planetary disk formation to dust accumulation into planetesimals, to the accretion of these planetesimals into large planetary embryos and, eventually, the final growth of these embryos into planets. For the crucial planetesimal-accretion phase, the complex coupling between dynamical perturbations from the binary and friction due to gas in the proto-planetary disk suggests that planetesimal accretion might be hampered due to increased, accretion-hostile impact velocities. Likewise, the interplay between the binary’s secular perturbations and mean motion resonances lead to unstable regions, where not only planet formation is inhibited, but where a massive body would be ejected from the system on a hyperbolic orbit. The amplitude of these two main effects is different for S- and P-type planets, so that a comparison between the two populations might outline the influence of the companion star on the planet formation process. Unfortunately, at present the two populations (circumstellar or circumbinary) are not known equally well and different biases and uncertainties prevent a quantitative comparison. We also highlight the long-term dynamical evolution of both S and P-type systems and focus on how these different evolutions influence the final architecture of planetary systems in binaries. View Full-Text
Keywords: Explanets: origin and dynamics; binary systems; planetesimals Explanets: origin and dynamics; binary systems; planetesimals
►▼ Show Figures 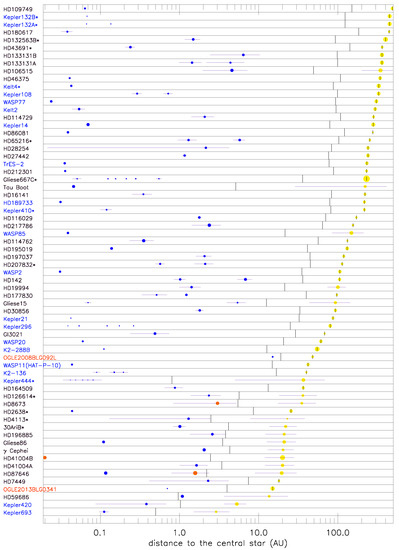