The observed polarization angle can be expressed as a function of the intrinsic polarization angle , rotation measure (RM), and the observed wavelength as follows, A vector map of the magnetic field can be derived using the polarization maps generated at two frequencies [19]. Based on the definition of the polarization angle at the wavelength as , the RM can be estimated from the polarization map of the two frequencies using Equation (2). where L is the line of sight length, is the line-of-sight component of the magnetic field, and is the thermal electron density, respectively. The sign of the RM is defined to be positive so that the magnetic field vector is directed from the source toward us [2]. Since polarization maps in lower frequencies than 1.5 GHz have different Faraday depths according to Han [20], it would be difficult to obtain the RM map correctly in the lower frequency than 1.5 GHz. These problems can be avoided by using C and X band data. The orientation of the magnetic field can be estimated from a polarization map of the synchrotron radiation at a higher frequency. In this study, we assumed that the synchrotron emission only arose from a galactic disk, and that the Faraday rotation occurred mainly within the galactic disk. The geometrical orientation of the galactic disk was determined based on the assumption that the spiral structure was trailing. The ambiguity of each polarization angle was addressed based on the sign of the RM as explained in the following section, and the direction of the magnetic field was determined accordingly. Herein, we used an infrared image acquired by the wide-field infrared survey explorer (WISE; Wright et al. [21]) to trace the spiral arms and the velocity field acquired from the HI nearby galaxy survey (THINGS; Walter et al. [22]). Based on the THINGS and WISE data we can identify the northwest side of NGC6946 which is nearer to us.
We used data published by Beck [12] and the astronomical image processing system (AIPS) to calculate the polarization intensity and angle using task COMB. Polarization intensity was corrected by subtracting positive bias using task POLCO. Though polarization maps of NCG6946 shown in our previous paper [19] were made with only interferometry data for the simplicity because it is focused on the proposal of the method, the maps shown in this paper is made with data with single-dish data and the missing large-scale flux is recovered. Basic parameters of the data are listed in Table 2 where the root-mean-square (rms) value of the noise of all Stokes components were calculated in emission-free regions.

We obtained polarization maps in the C and X bands and an RM map, as shown in Figure 2 and Figure 3, respectively. Note that the Faraday rotation effect was not eliminated for the sake of simplicity. Figure 2 show only polarized intensity values larger than . Even though there is an n ambiguity in the calculation of the difference of the polarization angles between the X and C bands, we considered only the case of n = 0 in the construction of the RM map because the typical |RM| of the galaxy is approximately 100 , which corresponds to the Faraday rotation of . Because the foreground RM may cause the magnetic field to change directions, the foreground RM of +40 was subtracted based on Beck [12].
Following the method presented by Nakanishi et al. [19], we derived a vector map as follows: (1) determining the geometrical orientation of the stellar disk assuming that spiral arms are trailing using the infrared image and the velocity field, (2) obtaining orientations of vectors based on the polarization map at the higher frequency, (3) determining the directions of vectors based on the sign of RMs. As described in Nakanishi et al. [19], data with small absolute value of RM need to be omitted because this method is sensitive to the sign of RM. A magnetic vector map is, thus, obtained as shown in left panel of Figure 4. The right panel of Figure 4 shows face-on views of the magnetic vector map. The face-on view map shown in the left panel was made as follows: (1) rotating the figure on the left panel by clockwise so that the major axis is parallel to the y axis, (2) stretching the rotated image by 1/cos i in the x axis direction to face-on view.
The magnetic field vectors shown in Figure 4 are plotted only at points that satisfy the following four criteria: (1) Stokes I is larger than 3 in each band, (2) polarized intensity is larger than 3 in each band, (3) | RM | of each pixel is larger than RM error of that pixel., (4) absolute value of RM is within 200 rad m. The polarization angle is calculated with using Stokes Q and U. When and denote the errors of Stokes Q and U, the errors of the polarization angle can be obtained using the error-propagation equation . One pixel has a size equal to arcsec square. To see the magnetic field vector with respect to the spiral arms, it was superimposed on the gray image of the 2nd digitized sky survey blue (DSS2 B; McLean et al. [23]).

4.1. Azimuthal Change of the Pitch Angle

We examined the azimuthal variations in terms of (1) the pitch angle of magnetic vector and (2) the angle of the magnetic vector by constructing the face-on view map, as shown in the right panel of Figure 4. The azimuth was defined as an angle measured clockwise from the far end of the minor axis, as shown in Figure 5.
The azimuthal variation of the magnetic pitch angle of NGC6946 is shown in left panel of Figure 6. Plotted dots are obtained from the annulus between the circles with radii of 0.68 and 2.04 kpc. The dots in Figure 6 are averaged values in the azimuth ranges equals to half of the spatial resolution (≃) at radius of 1.36 kpc. In averaging values in different radii, the azimuthal angle was shifted by with relation to that of radius kpc using the magnetic pitch angle p, which was taken to be based on a former work [12] to eliminate an effect of windings along spiral arms. The dots in left panel of Figure 6 represent the pitch angle of the magnetic field (dots and error bars denote mean values and standard deviations, respectively), the solid lines represent the brightness of the WISE data, and the peaks correspond to positions of the spiral arms. Looking at the ranges of the inter-arm regions (–, –) in Figure 6, the azimuthal variation of the magnetic pitch angle changes continually in the inter-arm regions. However, it changes rapidly by approximately around azimuthal angles of and , where stellar spiral arms exist.

4.2. Azimuthal Change of the Vector Angle

Next, let us consider if the number of reversals changes with galactocentric distance. Figure 7 shows face-on views of the magnetic vector map of radius ranges of (a) kpc, (b) kpc, (c) kpc, (d) kpc, (e) kpc, and (f) kpc. As discussed in the previous Section 4.2, six reversals were found in (a) and (b) of Figure 7.
Figure 8 shows the azimuthal variations of the magnetic vector angles in the the annulus between the circles with radii of 3.40 and 4.76 kpc, which corresponds to panels of (e) and (f) of Figure 7. The dots are averaged values in the azimuth width of , which is equivalent to the spatial resolution in the case of radius of 4.08 kpc. Figure 8 shows that there exist four reversals around , , , and whereas six reversals were found in the inner region. This fact implies that the number of reversals of magnetic field might change with the radius. The mode of m = 2 identified in the outer regions agrees with Rohde et al. [24], who mentioned that magnetic field structure is superposition of m = 0 and m = 2 modes based on the mean-field dynamo theory.

We applied a method proposed by Nakanishi et al. [19] to derive a magnetic vector map for NGC6946 using the data of Beck [12] to investigate whether large-scale field reversals exist in external galaxies. First, an infrared image and a velocity field obtained from WISE [21] and THINGS [22], respectively, were used to determine the orientation of the disk. Second, the vector map was obtained using a polarization map in the X band after resolving the ambiguity with the use of the RM which was calculated based on the C and X bands.
The obtained vector map was converted to a face-on view to explore the azimuthal variation of the pitch and vector angles of the magnetic field. As a result, we found that the direction of the magnetic field changed by abruptly, even though the pitch angle changed continually. There are six jumps at , and , four of which seemed to be related to the position of the stellar arms, and two seemed to be related to the position of the magnetic arms. We also found that the number of reversals decreases with galactocentric distance r and the outer disk of kpc has mode of m = 2, which is consistent with the prediction by the mean-field dynamo theory [24].

This study has not been specifically funded.

We are grateful to Rainer Beck at Max Planck Institute for Radio Astronomy for providing data of this study. We thank to Y. Kudoh for useful discussions, and to the reviewers for useful comments. We also thank to the SOC of “The Power of Faraday Tomography—Towards 3D Mapping of Cosmic Magnetic Fields”. 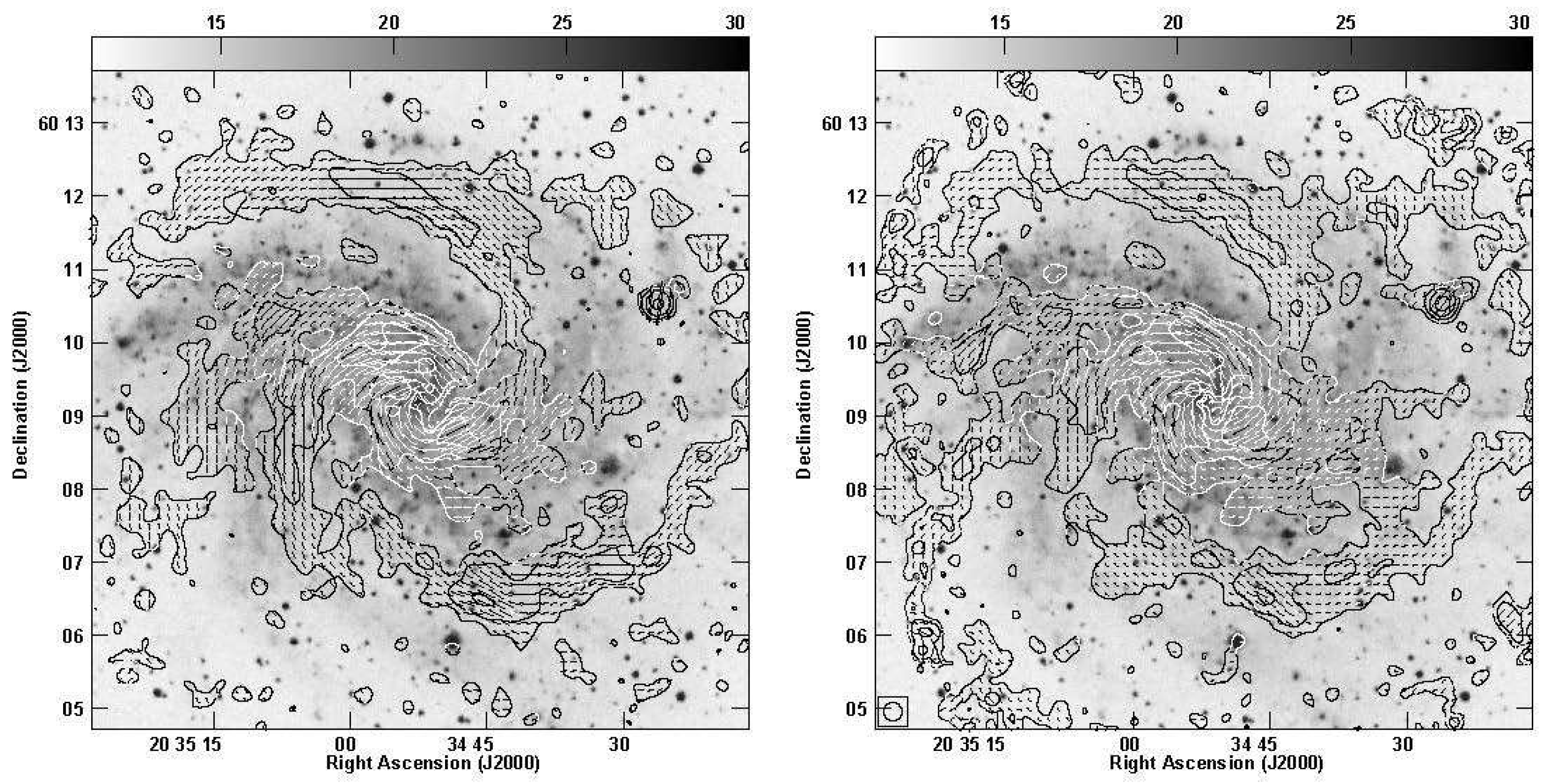 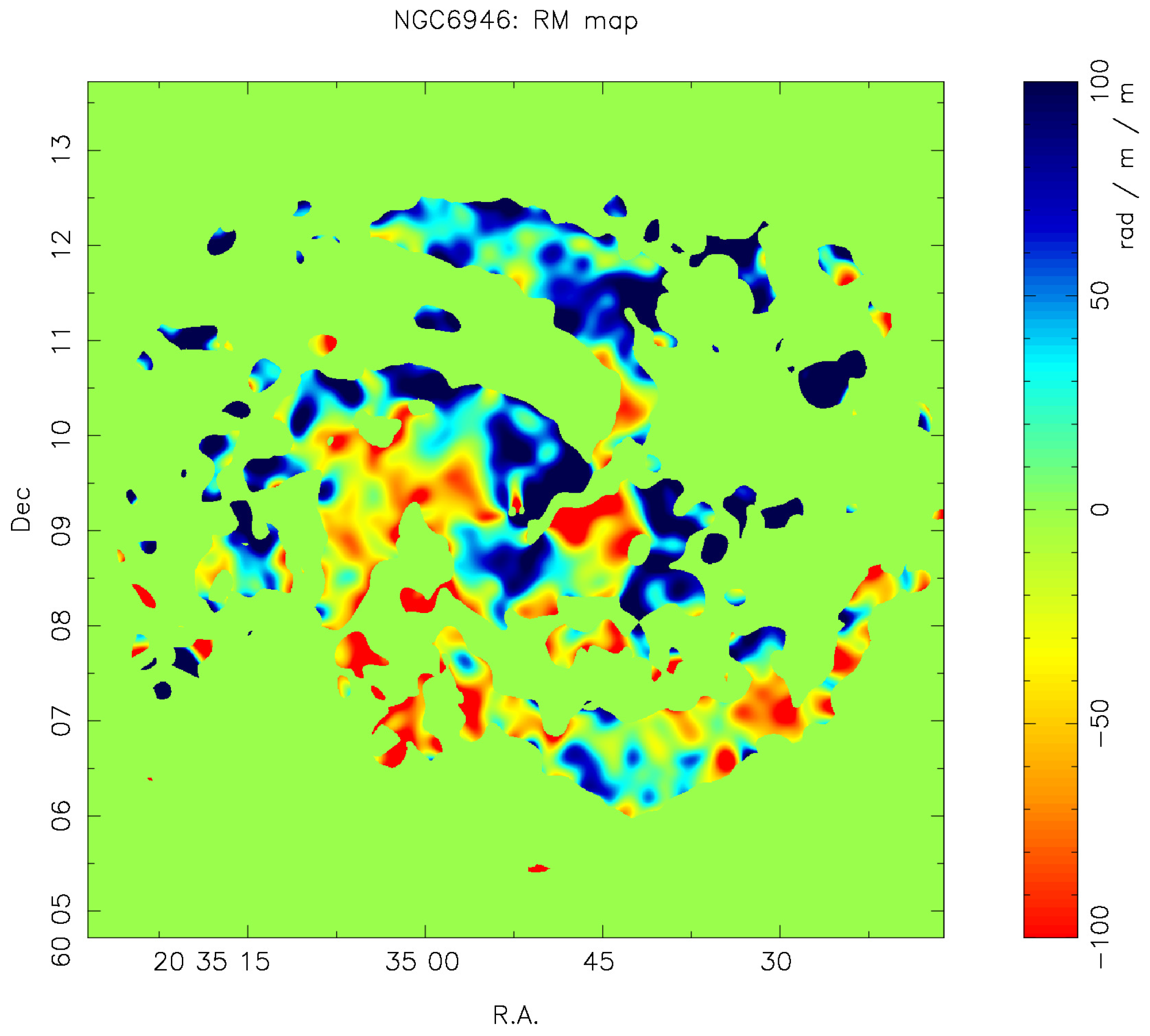 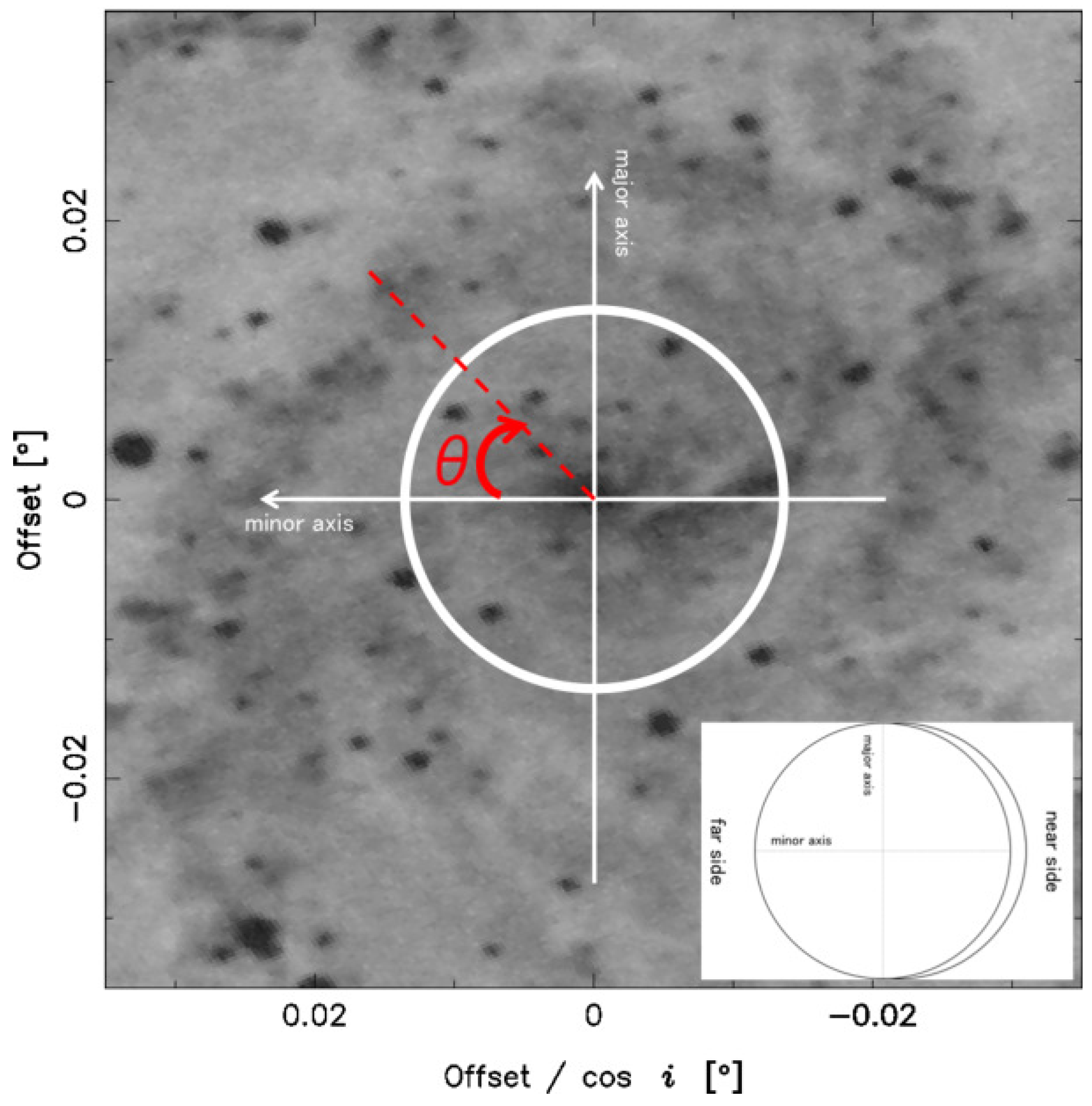