The Third Quantization: To Tunnel or Not to Tunnel?
Next Article in Special Issue

Constraints on Particles and Fields from Full Stokes Observations of AGN

The blazar PKS 1510-089 has shown intense activity at -rays in the recent years. In this work, we discussed the results of our 7 mm radio continuum and optical polarimetric monitoring between 2009 and 2013. In 2009, we detected a large rotation of the optical polarization angle that we attributed to the ejection of new polarized components. In 2011, after the occurrence of several -rays flares, the radio emission started to increase, reaching values never observed before. We interpreted this increase as the consequence of the superposition of several new components ejected during the -rays flares. A delay was measured between the maximum in the radio emission and the -ray flares, which favors models involving expanding components like the shock-in-jet models. Finally, we tried to understand the polarization angle variability behavior filling the gaps in our observations with published results of other polarimetric campaigns, and using the criterion of minimum variation in the polarization angle between successive observations to solve the 180° multiplicity. View Full-Text
Keywords: Blazars; PKS1510-089; jets Blazars; PKS1510-089; jets
►▼ Show Figures 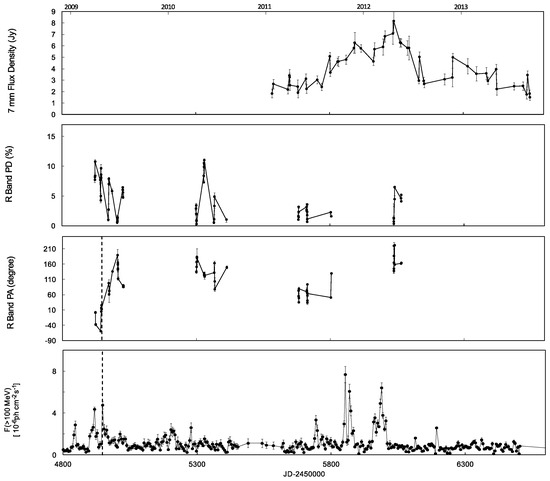