:
Gastrointestinal stromal tumors (GISTs), leiomyomas, and schwannomas are the most common gastric subepithelial tumors (GSETs) with similar endoscopic findings. Preoperative prediction of GSETs is difficult. This study analyzed and predicted GSET diagnosis through a retrospective review of 395 patients who underwent surgical resection of GISTs, leiomyomas, and schwannomas measuring 2–10 cm. GSETs were divided by size (group 2–5, >2 and ≤5 cm; group 5–10, >5 and ≤10 cm) for analysis. Demographics, clinical symptoms, and images were analyzed. A recursive partitioning analysis (RPA) was used to identify optimal classifications for specific GSET diagnoses. GIST patients were relatively older than other patients. Both groups had higher proportions of UGI bleeding, lower hemoglobin (Hb) levels, and a higher ratio of necrosis on their computed tomography (CT) scans. The RPA tree showed that (a) age ≤ 55, Hb ≥ 10.7, and CT necrosis; (b) age ≤ 55 and Hb < 10.7; (c) age >55 and Hb < 12.9; and (d) age >55 and CT hetero-/homogeneity can predict high GIST risk in group 2–5. Positive or negative CT necrosis, with age >55, can predict high GIST risk in group 5–10. GIST patients were older and presented with low Hb levels and tumor necrosis. In RPA, the accuracy reached 85% and 89% in groups 2–5 and 5–10, respectively.
Keywords:
diagnosis; gastrointestinal stromal tumor; gastric subepithelial tumor; stomach

Gastric subepithelial tumors (GSETs) are common findings in patients undergoing esophagogastroduodenoscopy (EGD). Gastric subepithelial lesions (SELs) can be divided into benign lesions, potentially malignant lesions, and malignant lesions. Benign lesions include leiomyoma, schwannoma, lipoma, and ectopic pancreas. Malignant or potentially malignant GSETs include gastrointestinal stromal tumors (GISTs), lymphomas, carcinoid tumors, and glomus tumors [1]. Different tumor characteristics, prevalence, and treatment planning depend on the pathologic diagnosis.
GISTs are the most common GSETs in the stomach, followed by leiomyomas and schwannomas [2]. These three GSETs are usually found in the muscularis propria layer by endoscopic ultrasound (EUS) [3]. However, approximately 10–30% of GISTs have malignant clinical courses [4,5]. The prognosis of GISTs is associated with the tumor size and mitotic index [3]. Despite advanced diagnostic equipment and studies, GSETs are still difficult to diagnose with non-invasive methods, such as EGD, EUS, and computed tomography (CT), preoperatively [6]. EUS biopsy is recognized as a better diagnostic tool. Some studies have reported that the diagnostic rate of endoscopic ultrasound-guided fine-needle aspiration (EUS-FNA) ranges from 62% to 80.6% [1,3,7]. However, EUS biopsy is not widely applied in GSETs and has limitations, such as insufficient specimens and small lesions. Because of the difficulty in predicting diagnosis and malignant potential, recent guidelines recommend surgical resection for gastric GISTs larger than 2 cm [6,8,9].
This study aimed to analyze and predict diagnosis based on preoperative clinical characteristics, laboratory results, and imaging studies among GISTs, leiomyomas, and schwannomas to refine the treatment strategy.

All statistical analyses were performed using IBM SPSS for Windows, version 22 (IBM Corp., Armonk, NY, USA). Independent t-tests were conducted for continuous variables, and 95% confidence intervals were calculated. For categorical variables, Pearson’s chi-square test was used. A two-sided p-value of <0.05 was considered significant. Recursive partitioning, a statistical method for multivariable analysis, was used to create a decision tree that strives to correctly classify members of the population by splitting them into subpopulations based on several dichotomous independent variables. Significant variables identified in the univariate analysis were candidates for defining in the recursive partitioning analysis (RPA) tree to identify optimal patient classifications for specific GSET diagnoses.

We retrospectively analyzed the preoperative clinical characteristics and imaging findings to predict the diagnosis of GSETs. Patients who were diagnosed with GISTs were usually older, presented with low Hb levels, and showed tumor necrosis on CT. In the RPA result of our study, the clinical findings and preoperative image findings could help predict diagnosis, which could assist surgeons in treatment planning before operation and other management.

This was a retrospective study approved by the Institutional Review Board of Chang Gung Memorial Hospital (IRB No. 202100954B0).

The authors appreciate Shu-Fang Huang for assisting with the statistical analysis. 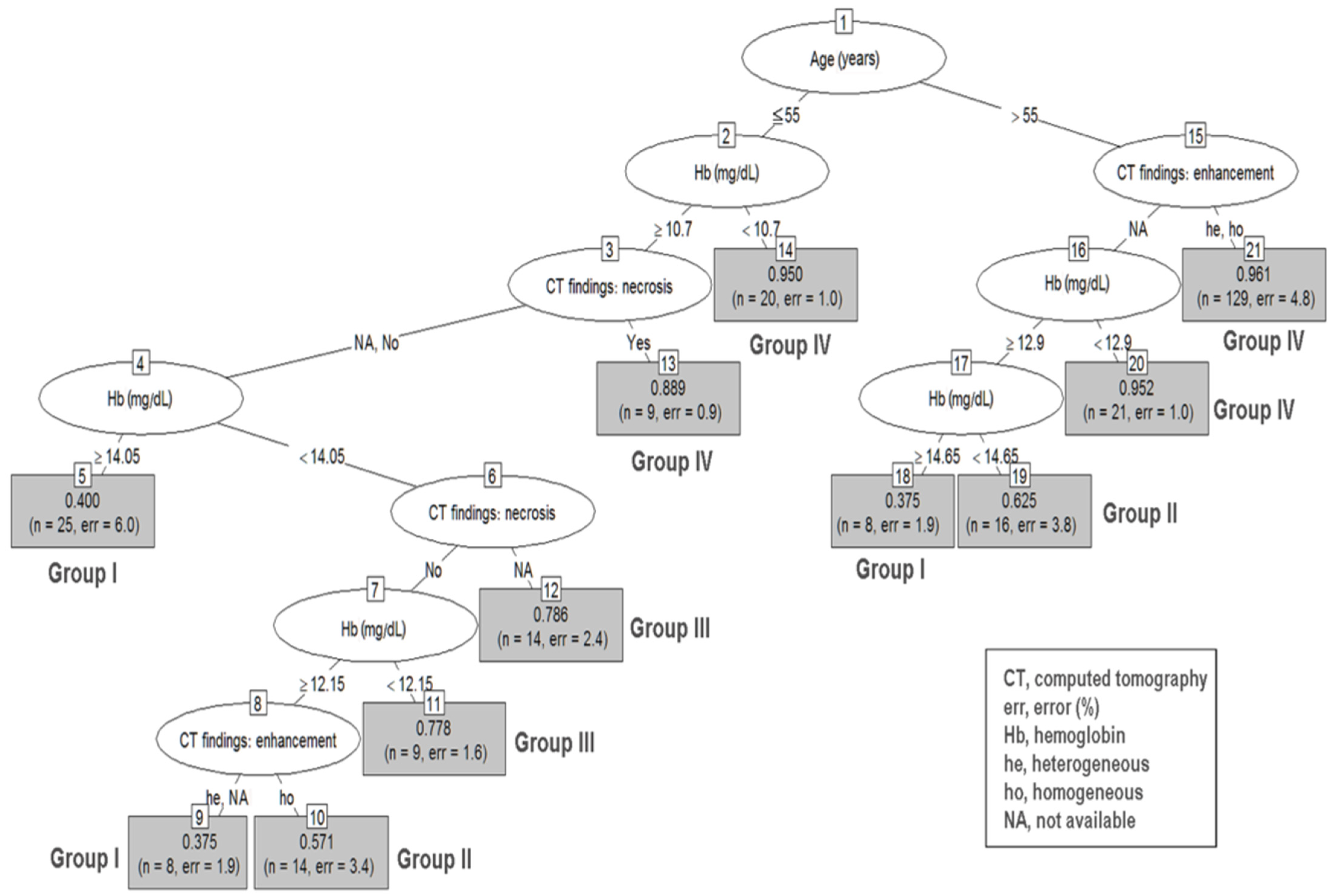